Gruntz are a solid set of platoon level rules with a good unit builder.  They mostly copy+paste Warmachine mechanics, combined with a random card activation.

Special Ops is their Necromunda-style campaign skirmish, using 3-10 specops troopers per side.  A $4 "supplement" to the original Gruntz rules, I was interested to see where they would go with it, especially since they had added "blips" (detection/stealth) and reactive fire (always good!).  The 2x2'map size is a bonus to the spatially-challenged.

The Shiny
A 20-page PDF with decent production values.  Solid enough, but my first impression was "a bit light on"- I feel I need to be careful not to give away all the rules when reviewing it! 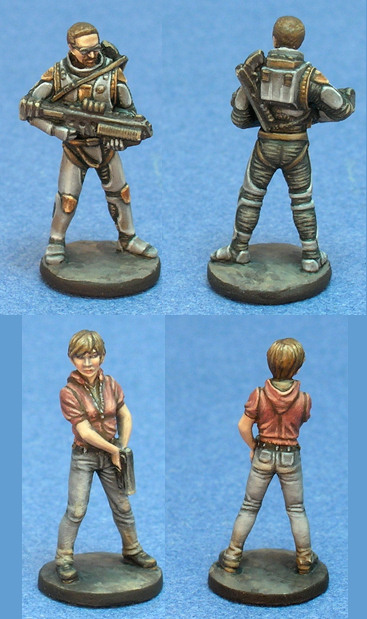 It always amazes me when I realise these models are 15mm not 28s...  Khurasan Miniatures has re-opened for business, so I hear - I'd rate them the #1 purveyors of 15mm goodness...  however their postage is rather steep unless you live in USA
Mechanics
I'm not going to repeat myself here, but think Warmachine's 2d6+stat approach, minus the magic and replacing warjacks with vehicles. IGOUGO is replaced (improved) with random card activation.  There isn't any mechanics here anyway - you need to already own the Gruntz rules use this supplement.

Stealth & Blips
Your models remain as 'blips' (and you get a dummy blip to better sow confusion) which move around, acting like models, until revealed by opponents passing a SKILL test.

Reactive Fire
Any enemy moving in LoS triggers a skill test (with better modifiers if you were on overwatch) of any models which are not suppressed.  Overwatch units can also react more than once.  I like how active models, when they trigger reactive fire, can opt to instantly duck back (and automatically avoid being shot) which stops the reactive fire from being Infinity-lethal but allows troops to cover/pin down areas.

Shooting
Most weapons are effectively unlimited-range and range bands (and their modifiers) are handled easily and sensibly.The weapons are a reasonably comprehensive generic selection.

Hacking
Hackers can buff/debuff shooting, defence and movement and either reveal or conceal units.  This is done as an opposed roll with enemy units and adds a nice layer without being complicated. Hacking devices come in 3 levels of power and can be customised to work better at buffing, debuffing, anti-vehicle or counter-hacking.  Good. Solid depth without getting confusing.

Army Builder
This was the main reason I'd recommend Gruntz, and "Spec Ops" also has a unit builder.  There are 12 special rules (most of which are recycled from Gruntz) and the usual stats (Shoot, Guard, Skill, Assault, Soak, Mental). Most models have 4 wounds. (I'm not a fan of tracking wounds aka hitpoints, but I guess it's OK if you're only using a handful of models).

There are 8 team archetypes who have 1-2 shared special rules which is quite restrained but adds flavour. I.e. the space ninjas might get "stealth" and a religious group "fanatics." There are also a range of weapons from SMG, to SAW to shotgun - each comes in improvised, projectile, laser and plasma versions.  Equipment is likewise kept minimalist (compared to say Infinity or Necromunda) with half a dozen basic things like suppressors and medkits.  It's more at the complexity level of LOTR's Battle Companies campaign rules.   I like how there is an example of how to build a team.

The army builder, if I am to be honest, while good and straightforward, was a little less comprehensive than I was hoping for.

Missions & Advancement
You roll 2d6 against a list of  missions (recon, hack, assassinate, sabotage, hostage rescue). There's also a branching campaign if you want more of a narrative feel.

Units gain XP which they can use to improve equipment, heal injury effects, or roll on an advancement table (and potentially boost stats). Injured troops roll on the recovery table to see if they miss games, or perhaps take permanent damage.

TL:DR
A pretty light, generic system which isn't going to swamp you with lots of rules and upgrades. I'll repeat it reminds me of the complexity of LOTR's Battle Companies skirmish campaign rules - quite a ways simpler than Necromunda.  It allows you to build your own warbands, and I predict the 15mm sci fi crowd will 'dig' it.

Recommended: Sure. While it's not amazing, it's familiar, solid and capable and allows for a simple campaign with advancement, injuries etc. As a bonus, it scales with the platoon-level Gruntz.
Posted by evilleMonkeigh at 02:55