Diary of an Average Painter #4: A lick (wash?) and a promise

I'm going to do an article on "kids toys as wargame minis" but this post will highlight one quick method of turning plastic-y junk into tabletop minis - the good old wash.  This is simply using very watery dark paint (i.e. 50/50 water and black/brown paint) or premade bottles such as GW's Nuln Oil.
It is brushed over the toy, and pools into the cracks, giving more "depth" to the model and dulling any plastic sheen.


Exhibit A: A $10 plastic model of the Milennium Falcon, from a local junk shop 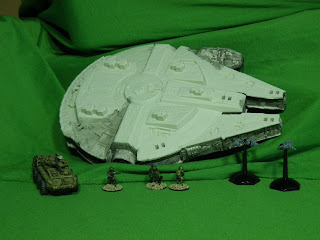 You can see the wash on the bottom left corner 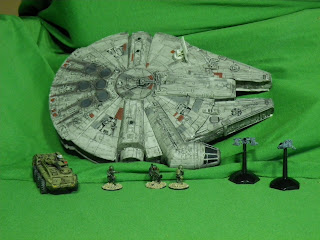 The other side is washed. (I left the radar unwashed for contrast but I forgot to tell my photographer/wife about it)
So -3 minutes later with black wash casually slopped all over it - look how much more realistic is looks.  It is now similar to hobby-grade kits available for $50+....
(Interestingly, it is very similar to the prepainted FFG model for their X-Wing game that costs $52 - guess those flight stands and unit cards must cost $42 to make...)

As you can see by the models nearby, I planned to use it as a 15mm dropship or a mothership for space fighters... but it's too iconic - everyone walks past and says "wow, Milennium Falcon!" grrr

Another source of cheap models are junky collectibles such as the Heroclix, Horroclix, and Mage Knight games - or any prepainted plastic toy in the right scale. They usually have hideous factory paint jobs and there are some hideously deformed sculpts... ...but there are decent ones among them. The trick is looking past the paint and seeing the model. 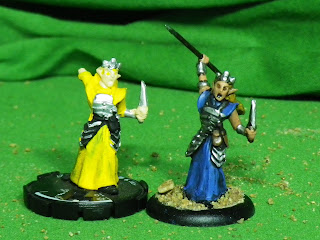 These Mage Knight princesses were both broken - the yellow paint was unsuited to washing so I redid it in blue. It is a bit of a dodgy sculpt. The blue princess shows the dangers of too much wash - a bit of a dirty urchin look. It's easy enough to fix with flesh paint - but I'm lazy. 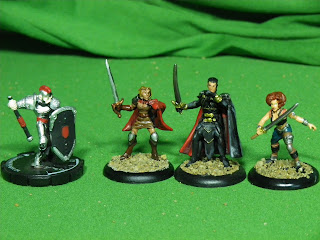 The one on the far left shows the bendy plastic they are made from; the others are more promising; most simply got a brown wash and some highlights (i.e. grey on the black cloak, light metallic edge on the sword). A wash also does wonders for making hair look less "flat." 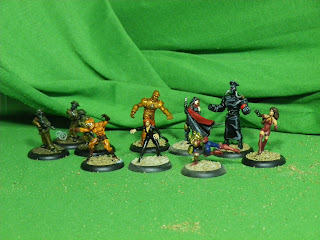 These Heroclix are lesser-known superheroes so I don't get people saying "ah - Avengers!" in my Weird War II game. (the brown based models are West Wind SOTR minis) 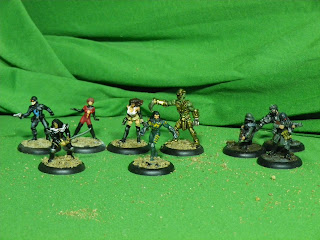 ...more, this time with West Wind Germans.  Bonus points for identifying all the models! 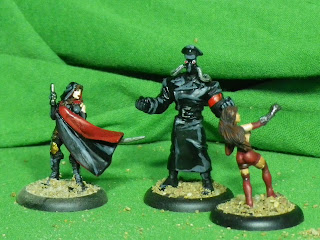 These models show a few simple ways to make them look less plastic-y:
As well as a wash, they often get a highlight in a lighter shade - i.e. brighter red on cloak creases of Magdalena(l), and butt cheeks of Witchblade(r) - where the sunlight naturally catches the mini.  The Nazi in the middle had his cloak edged in grey so he didn't look like a shiny blob of black.
To finish, I streaked the hair of Witchblade to give it depth, and dulled the bronze kneeplates of Magdalena with a wash.

I see there is some sort of prepainted D&D game which might be fruitful for cheap models, but with postage from US skyrocketing my sources of cheap clix have dried up - the postage costs many times more than the models. 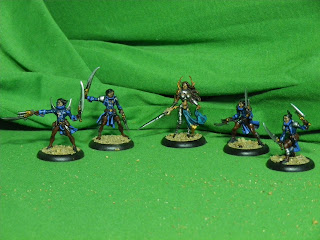 These Confrontation minis are going to be "Lucky 13th" gunmages for Warmachine. They are 100x nicer than the official sculpts (if you've seen the bland little out-of-scale pygmies in a game, you'd know what I'm talking about). 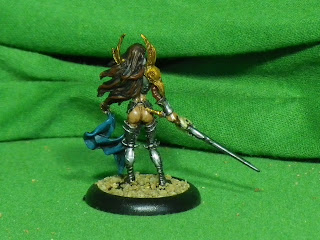 The "chainmail bikini" trope is ingrained; I originally gave her brown leather pants but it looked odd... 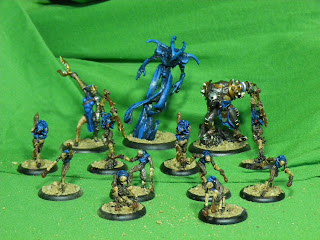 These are Dragyri from Dark Age. Since the game was "unsupported" at the time I think I picked up the lot for $30 from an online sale - I got a complete warband for the price of a single Warmachine jack.  They will be a faction for my homebrew Middleheim rules. 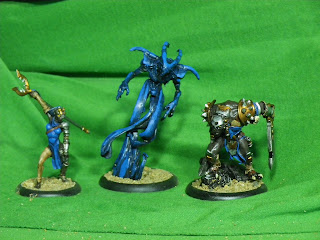 The centrepiece models. I find it interesting that a race of insectile flea-like beings would have females with mammaries...  Us wargamers must be a sad bunch...