Yesterday I went out and saw Battleship. Yes, it was every bit as corny as you would expect. A movie based on a boardgame? With Rihanna as a star actress?

The plot was as cheesy and unlikely as you'd expect.  But there were explosions. BIG explosions!

The CG was pretty awesome though. It was practically a recruiting movie for the US Navy - after watching Harpoons and gunfire rip explosively into alien motherships and Phalanx gatlings spew streams of cannon fire, I wanted to join myself!

I remembered I had a set of modern naval rules which I had dismissed for no other reason than the rationale that naval combat was boring, involving 2% maneuver and 98% electronics capabilities.

Having been frightened from modern naval gaming by Harpoon (a game that made Star Fleet Battles look as simple as tic tac toe) in my formative years, I opted for a slimmer 48-page ruleset, "Shipwreck" by Martin Bourne.


The Shiny
Softbound and slim, it has a range of nice colour photos in the middle section and black and white elsewhere.   A card fast-play sheet looks promising.  Neatly and pleasantly presented. The text is a little small so bring your reading glasses. Only 24 pages of core rules looks good as far as complexity is concerned.

Movement
Weapons are abstracted into six range bands (v short to extreme)  so ground scale is a bit hazy.
Time scale also varies: there are 10 minute maneuver turns in which ships move, and 2 minute combat turns in which jets and missiles move. Gameplay has take priority here, which is good.

Initiative/Play Sequence
This is broken into movement, reapirs, detection, combat and air support.  The first two are simply but combat is pretty complicated and can involve 9 sub-phases.

Detection
This is very important.  Ships need to determine if they are active or passive and make a detection roll against any target they wish that is in range. This could be time consuming if you have a lot of enemy ships. 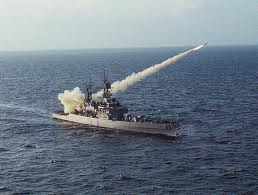 Combat
This has rules for launching and defending against missiles. EW, chaff and flares also play a role. There is only simple record keeping (light, heavy, crippled, sunk) and ship tonnage is used to determine resilience to hits.  I like the use of a d10 for all Shipwreck! rolls as it offers more choices than a d6 and is simple to use.  There is a single, easy to use table for resolving hits with a single d10 roll.

Submarines
These have to be the most brilliant "hidden movement" systems I have come across.  They are simple - there is only ONE roll made per side against each sub to detect them. Sub movement is largey abstract - only detected subs are placed on the board as the enemy knows of their presence, but they cannot be attacked.  The contact needs to then be localised before ASW can engage them.  In this process the submarine may be able to break off contact and escape. It is simple, effective, and I am stealing some ideas for it for my own homebrew games...

Air Operations
These are pretty abstract but include dogfighting, CAP and land and naval strikes. Since the focus is on naval combat I think they have a good balance here.

Other Stuff (the other 24 pages)
They have included an example scenario which I found very helpful for understanding the detection rules which for me were the hardest to understand.  They also showed how you switch time scales from maneuver turns (10 minutes) to combat turns (2 minutes) when a missile or jet is present on the game table. There is a modelling guide and ship and aircraft data sheets for you to copy.  A general list of common ships, aircraft and weapons (guns, missiles, torpedoes etc) are included.

TL:DR
I'm not sure modern naval combat is prime wargaming material as the emphasis on maneuver is low, but this ruleset makes a good stab at simplifying it to a playable level. I think the design captures the hide-and-seek nature of modern naval combat, whilst abstracting a lot of the errata.  The submarine rules in particular are a great mix of playability and abstraction whilst retaining the flavor of detection and localising contacts.

Get this game if: you like the idea of actually playing a modern naval game more than looking up their stats in Janes Fighting Ships.

EDIT: Worried about the ground scale and table size, I found these 1:6000 scale Hallmark ships which are kinda pricey for their tiny size but pretty impressively detailed
Posted by evilleMonkeigh at 16:03