Born of my frustration wet navy/Full Thrust clone space games, I've challenged myself to make one that I like.

OK, sorting out movement is my challenge for this week.  I'm borrowing heavily from GDW's Triplanetary - sans hex grid and grease pencil.  You need to measure 1 or 2 times; using a hex grid would speed up the process considerably.

I'm going to explain it with a series of pictures. You will need 3 counters per ship. One counter is under the ship base at all times. I'm using EM4 tiddlywinks as they are cheap and fit perfectly under  a 'standard' hex base (available GZG or EM4).

Once the movement process is completed only 1 counter is visible so you aren't overly cluttering up the game table.  Obviously you could put a name or code on each ship's set of counters so you don't confuse them. 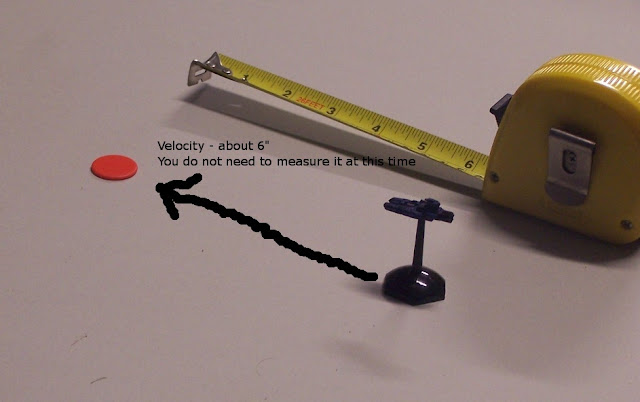 #1. The counter shows the ship velocity and drift direction - where it will end up at the end of its next move if no thrust is applied. You don't need to measure anything - this is how ships will look when you are not moving them (i.e. most of the time). 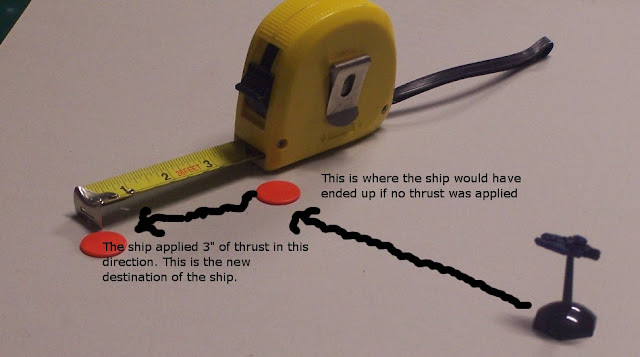 #2. But it is our ship's turn to move and we choose to move him 3" to the left. The ship applies 3" thrust and a new counter is put down, showing the new destination now thrust has been applied.
You may need your tape to measure the thrust distance. 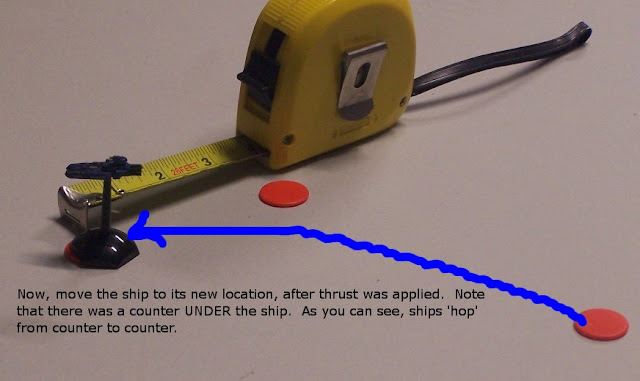 #3. Now we move the ship to its new location. You will note there was a counter under the ship's base before - ships move from counter to counter. The old pre-thrust drift marker no longer has any relevance, unless you are using the "Facings" optional rule (to be posted separately).

#4. You definitely need to get your tape out now.  Leaving the markers where they are, we measure the new velocity (the distance travelled between the ships old location and its new location). In this example it is 8".

#5. Using the tape, we make a straight line between the old and new ship locations, and go beyond it to put down a new marker 8" in front of the ship.

Simply remove the rear counter to tidy things up and we are back were we started at step 1, with the counter in front of the ship showing the direction and velocity of its drift.

I've run through the process a few times and it seems relatively fast (about 30 sec per ship); definitely much faster than writing down orders a la Full Thrust.   I think a player could handle over a dozen ships moved like this with ease, though the counter out in front of each ship could get annoying.  I think I might make black counters to match the space mat and simply do a ship code in white on the counter, instead of using bright counters like in the example.

Not sure about fighters and missiles using the same system though - I will probably either abstract their movement or give them a "fixed" thrust and velocity so you simply have to shift one marker.

This week I will try to tidy up movement rules including facing, and add planets and terrain movement rules.  If time, I will look at initiative and reactions, or "Anything but IGOUGO"
Posted by evilleMonkeigh at 07:01