Space games are boring.  Whilst land combat games (in particular skirmish games) have changed radically since the 90s, and come in a wide range of flavours. spaceship games remain variations on Full Thrust. Silent Death, another 90s carryover, is the only spacefighter game going.  Most games are very much wet-navy (usually WW2) in space, with buckets of dice, lots of hitboxes and criticals.  After I realised I spent more time printing off ship record cards, and filling them in during the game, than I did actually playing (i.e. making move choices, moving models around and making pew pew noises), I gave up playing space games as I awaited The One Ruleset that would make space fun again.  It hasn't come.

Playing Infinity and Tomorrow's War lately has shown me that you CAN spend more time making decisions than chugging dice and performing laborious record-keeping, and it's pretty darn fun.


So what would my ideal spaceship game look like?


#1. Record keeping would be minimised. This includes no written orders. Piles of tokens are to be avoided as well as they look unsightly on the space battlefield. Critical hits would be restricted to a few generic areas, such as firepower, defence and mobility. Damage to be simplified into descriptive labels like "cosmetic damage, significant damage, crippled, destroyed" and shields to  "full, failing, down"

#2. Movement in vacuum would allow ships to drift and maintain inertia until thrust alters their direction. This is a must as anything else is just a glorified naval game. Moreover, movement should be hexless as hexes are easy to add into a game but not everyone has or wants a hex starmat.

#3. Ships would not miraculously teleport past each other, but be able to react to and fire at each other throughout their movement, in a contested reaction style similar to Ambush Alley Games or Infinity.  You shouldn't be able to wander off for half an hour for coffee while your opponent makes all his moves.

#4. No IGOUGO.  Ship initiative should really matter, as this is important part of 'tactics' - this should be a meta-game in itself; having initiative perhaps allowing players to force enemies to move particular ships, or try to maintain momentum with risky rolls.

#5. Maneuver should be important. Whether by specific weapon or shield facings, or 'to hit' modifiers that vary according to angle and closing speed, a game should never be resolved by shoving all your models into the middle of the table and chugging dice.

#6. All game rules must be streamlined, and offer as many choices, in as simple a way as possible.  The player should be constantly faced with agonising tactical decisions, but be able to execute them swiftly and easily.  Add in more decison-making layers, but only if they are simple and fast to execute.  Perhaps an order system like Battlefleet Gothic or simply allowing ships to have "attacking/defensive/speed" boosts like in the videogame Homeworld.  Any options offered should consider if the added tactical naunces are worth the tradeoff in game speed/playability.

#7 Ship design rules must be simple, robust and resist abuse. Most space gamers love creating new ships, and they also love winning - a dangerous combination.  There should be a modest range of generic weapon choices, kinetic and energy - just enough in variety to simulate a range of TV shows and movies.

#8. All rules should follow the motto: Maximum choices, minimum recording.  You should constantly be thinking about the next move or counter to your foe, not pawing through the rulebook or rolling to tick off 30 criticals. 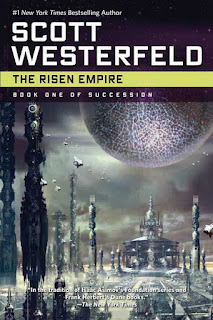 Plotting enemy courses weeks in advance, swarms of remote and AI drones with a wide variety of roles, sand warheads to scrub off electronics...
#9. Rules can simulate all TV series, but avoid WW2-in-space tendancies, leaning towards what I might hesitantly refer as 'slightly harder' sci fi.  Think Lost Fleet, Risen Empire and Dread Empire's Fall with ships on set vectors and swooping rapid engagements rather than Star Wars & Star Trek style with ships hovering in space exchanging broadsides)

#10. Ship crew skill can matter. Whilst not necessarily modifying firing rolls (as most space weapons would be computer controlled anyway, one presumes) this could impact areas such as initiative, maneuver and damage control.

#11. A campaign system should be included. This should be simple, focusing on making scenarios for fighting rather than resource gathering and research, and allow limited but not gamebreaking crew advancement/upgrades/traits so players can get attached to favourite ships, but not create the undefeatable USS Enterprise-with-uber-lazors-of-doom.

#12. Each player should be able to manage about a dozen units comfortably and a game should finish in a reasonable amount of time - say 45 minutes to 2 hours. 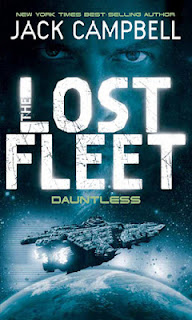 Epic battles at fractions of lightspeed; using enemy velocity to predict where your opponent will be as the position you receive is always out of date; clouds of "grapeshot" ball bearings to defeat missiles and shields - this is the best sci fi reading out there
So enough whinging - time to get off my butt and do something.  Keep an eye on this blog as I try to fulfil these criteria...   the next post is "Movement" as I try to come up with a simple, no recordkeeping vector system....
Posted by evilleMonkeigh at 03:23