Competitive fight-to-the-death games satisfy a certain type of gamer, but such battles are unusual in reality.  One side will leave well before total destruction, having achieved or failed its mission or in response to strategic dictates.

A campaign system gives context to fights, and can generate interesting situations beyond simple "kill em all" battles.  Mining outposts can be defended, merchant convoys raided, shipyards blockaded. Surprise attacks can be launched on naval shipyards. Sometimes forces might only gather intel - other times they may lure enemies into a trap.  Battles need not always be perfectly balanced affairs and sometimes 'victory' might be simply extricating the force with minimal losses.

It's All About Combat
These sorts of games can devolve into economic and political sims with nary a shot fired. This defeats our purpose - we want to pew pew with our spaceships.  The campaign game mechanics must:
*abstract economics and politics
*encourage regular combat and discourage "turtling" - i.e. hiding behind powerful defences whilst building up an overwhelming force 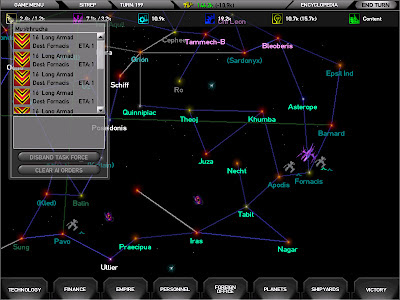 Detailed simulations of trade, economics, politics and research are best left to video games. We just want to pew pew with metal spaceships!

Advancement
Units that gain experience and skills are fun. They have character and flavor. Giving ships the ability to gain traits and advancements through combat will encourage players to engage in minor skirmishes to 'blood' their crews and gain experience levels.

TL:DR
Campaigns are important to give context and variety to battles but should encourage (or indeed mandate) regular battles rather than players meta-gaming any economic or social aspects of the game. Campaign record keeping and paperwork should be minimized.
Posted by evilleMonkeigh at 03:18