A Reason to Fight: Terrain (Delta Vector the Game)

From my masterly research, we can assume 4 objects, covering about 4-8 hexes of a average 1.5" hex map. Which has about 780 hexes in it. So terrain covers 1% of an average space table.

Compare this Infinity table, which is a little more populated:

This photo is from Makatish's Teahouse - a site I recommend visiting (see links in the blog)
No wonder space games usually involve charging into the middle and chugging dice, killing all the small craft in the first 1-2 turns and then grinding the enemy hitboxes down.  Your most important decisions are limited to managing range and choosing targets, and who to send into the meatgrinder first.

"But space is empty!" the masses cry
To which I respond: "Then why are they fighting over it?"

If ships possess jump drives or some sort of FTL travel there are no logical reasons to fight in deep space. Why would anyone want to defend empty space? I can see why they would protect a homeworld, a industrial moon, and agricultural base and a mining asteroid, or a space station though.

Furthermore, terrain makes for interesting gameplay.  It can provide a variety of effects such as blocking line of sight, provide a manuever hazard (especially for vector games); and a form of cover.

Space terrain is actually more interesting as you are limited by your imagination in possible effects. Effect fields can conceal, fry sensors or effect only particular weapons. Radiation zones can render fightercraft useless and impact the balance of power in a game.

More terrain is more choices. More choices is more tactics.  Thoughtful players will be rewarded over simply lucky ones...


Terrain is Good Cos:
#1. It makes gameplay more interesting, introducing new variables to firing and maneuver
#2. Gives a logical reason for the fight to take place

Take the planet Saturn, from our own prosaic, commonplace solar system. It has its own ice debris field surrounding it and no less than 62 moons. Would that be an interesting terrain table to play on? You bet! 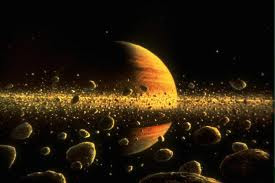 Now imagine asteroids with gun emplacements firing into certain arcs; it would make navigating it a puzzle and a game in itself....
Jumpgates vs Jump Drives
I like jump gates as they seem somehow more logical.  They also provide natural chokepoints for interstellar traffic and a good place for fights to start.  We are, after all, interested in space fights.

Jump drives need to be limited as they are susceptible to abuse.   The ability to disappear and reappear anywhere on the battlefield, or easily disengage from any fight is a powerful one that should not be owned by each and every unit.  Limiting jump drives to and from jump beacons (based on planets or maybe certain ships) and certain ranges from gravity wells; and needing a long a spool-up time might help prevent abuses and make it a means of travel rather than a win-button.


TL:DR
Space games need terrain, as much as any game. The 40k tendency to use a few pieces of terrain is hurting the space genre.
Posted by evilleMonkeigh at 02:48