It's time to make a few decisions:
Fighters, Missiles & Drones
Single fighter per stand, or 4-12 per stand fleet-scale style?
Fighter/drone/missile movement - use same token system as ships, a simplified version or abstract it more?
How to make them useful without overpowering them; maybe add ace pilots/squadrons?
Drones - how should they work - maybe a range radius limit from the mothership?
Should fighters track fuel (make a fuel roll each time they use afterburners/dogfight; a fail roll = impossible to initiative dogfight or afternburners, if attacked in dogfight, have low fuel penalty) vs record keeping
How to missiles intercept and impact targets?

Velocity/Thrust Caps
How fast do I want ships moving/changing direction? Very important when compared to weapon ranges
Since thrust impacts effective velocity (speed) what is 'normal' thrust?
Movement should be high compared to weapon ranges, emphasizing ship maneuver
Effective weapon ranges that are many x the normal ship speed means it is a dice rolling match
Should I have a maximum velocity over which engagements are impractical? How many 20" moves can you make on a table anyway?

Detection
This adds a layer of complexity and decisions (good) but takes time (bad)
If each unit detects individually, that is a LOT of detection rolls or simply range measuring etc
Maybe units that are far away or in cover in an asteroid field simply receive a initiative 'tactical' advantage instead; i.e they cannot be forced to move by an opponent with the initiative or a ship must be really close to force them to move
Is it possible to be stealthy in space anyway? vs cloaking devices/stealth ships are in nearly all movies 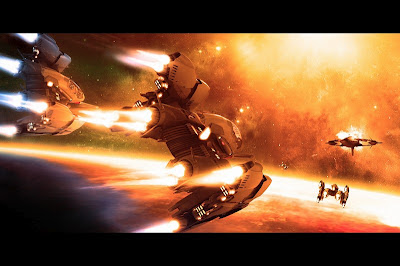 Combat Mechanics
Do we go the Warmachine 2d6 route? (familiar, hard to give points cost, use d10s (easy to do costs) or multiple dice types (not everyone is a D&D nerd)

How can we represent different ship types whilst ditching hitboxes etc. How do you show a big but poorly armoured ship vs a small but heavily protected one?

How will damage be applied?  Will it be as a ratio attack vs defence, like General Quarters or a Skyful of Ships?  Beat a threshold (like Firestorm Armada; will your to hit die x the attack like in Heavy Gear?

Do we have simple criticals (that could be recorded with a micro d6 beside the ship) or generic ones (propulsion or weapons/systems halved)  or eschew them altogether?

Shields
Is this another thing to track? Having directional shields is good (increases tactics, maneuver), but how to do it without book keeping? Maybe BFG blast markers? Would they recharge in a turn or over the course of the battle?

Ammunition/Heat Buildup
Heat management was cool in Battletech. This could also discourage spam of ammo-based weapons.  Do we track this, and how? Is it more trouble than it's worth?

Power Allocation
SFB was a nightmare but a simple Homeworld system where you can slightly boost offence, or defence or speed would be workable I think i.e.
Double thrust or fire energy weapons twice in an activation or overloard/recharge shields

Repair
How much in a turn?  How damaged is a ship before it is beyond the on-board crew's ability to fix it?

Jumpgates and Jumpdrives
Jumpgates focus combat and give exit/entry to battlefield.
Jumpdrives are needed cos they appear in so much sci fi on TV. Jumpdrives will need to be regulated, within a min-max range from a gravity well or beacon (i.e. ships arrive stationary, between 10-120" from gravity well, facing the gravity well; and can only reaction fire in the first turn?); they need time to spool up/pass CQ checks?  Jumpdrives could be abused easily as a tactical combat aid...

Weapon Variety
Enough to be interesting and simulate all TV shows, few enough to be remembered by everyone without consulting charts


Orders
The BFG order system gave great flavour and a new level of tactical choice.  Maybe something similar (6 choices shown on microdice) here, or merge this with power allocation?
Maybe excess thrust can be spent on "Evasive Action" - penalties to incoming fire caused by zigzagging/thrust adjustments along general course.

Ship Types
Most space games have small ships with a lifespan of the first 1-2 turns as they act as ablative armour for the larger ships.  Although ships in the future may be similar, for gameplay sake giving ships defined roles (and all ships survivability) is important. A good example is EvE Online (the MMORPG) where small ships are almost impossible to hit by bigger ships and can jam enemies jump drives to stop them escaping.
Non battleship types must have useful roles and decent survivability.

Generic vs Specific
Do I want to keep my generic 'works with any TV show' rules in favour of more specific ones? This would simplify and focus my design choices more
Posted by evilleMonkeigh at 21:10