CAV: the "other" mecha game

This is a relatively unknown mech game put out by Reaper miniatures (yes, the guys who make RPG minis).  It uses N-Scale mecha (model railway terrain would fit nicely)

Like Heavy Gear they live in the shadow of Battletech, which has a wonderfully developed universe and is good for 1 v 1 duels but has impractical record keeping for playing larger games - and chipping off armour hit box by hitbox so I can actually damage the frickin thing seems a bit silly.

At around $10 apiece they are similarly priced to Heavy Gear mecha but are somewhat larger and could almost double as 15mm mecha (depending on the cockpit size). 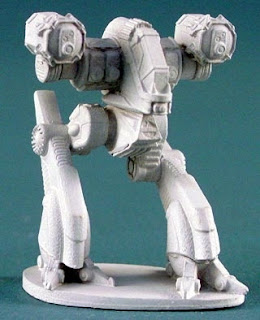 This would just about do for my 15mm troops as well...

Since the rules are free to download here I will limit my comments.

For those who couldn't be bothered reading the rulebook....
Initiative is determined by drawing from a deck of cards (random alternate movement).  It can be played with or without a hex map.  Movement is pretty standard. Mech pilot skill is important and modifies most actions.  Electronic Warfare is important and the attacker must win a contested d10 roll to lock on.  Direct Fire is similar - weapon attack + d10 vs defender armour + d10. The difference in the die rolls determines the damage. A d6 or d8 is used to record damage and placed next to the model. Units can attempt to repair damage on-the-fly. Units can be suppressed.  Defenders can always fire back once fired upon in an automatic free 'reaction' of sorts.  There are rules for indirect (artillery) fire and close assault.  CAV has a loose army construction feature with general guidelines rather than strict army lists. Vehicles have a points cost which is modified by the level of pilot.  These are listed in the back of the rules. 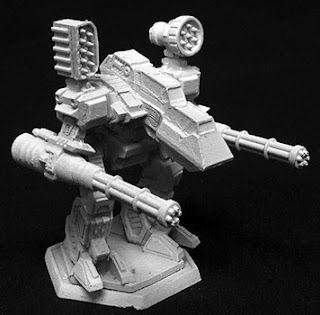 TL:DR
I liked these rules (initiative, reaction rules, low record keeping, simple combat resolution, pilot skill, suppression) and will test them alongside Heavy Gear: Blitz! when I order my 1:300 mecha.
Check them out!
Posted by evilleMonkeigh at 14:59