A few things I have realised:


REACTIONS
Allowing ships to react to an enemy ship' s fire by moving complicates things vastly.  If a ship reacts to an enemy attack and responds by moving... perhaps into the path of another ship, which also reacts....  by moving into the path of another ship.... you can see how things could spiral out of control and it would almost be impossible to remember who is reacring to whom and in what order


Solution #1
Change the 'move' reaction to an 'evasive' reaction.  The reacting ship gets a modifier = to thrust to any fire aimed at it. I.e. a 3 thrust cruiser can add +3 to fire aimed at it.  This makes the 'evade' choice more valid for smaller, more agile ships whereas bigger ships are likely to forgo this in favour of firing back... which makes sense. This also has the benefit of being the simplest - the only ship actually ever moving is the active ship. The approach I currently favour.

Soluton #2
Allow ships the evasive bonus AND to make their move out of seequence; with the following rules:
(a) the reacting ship cannot initiate fire at any other ships as it moves
(b) ships can react to it by firing at it with an Offensive Reaction only (i.e. they cannot themselves move, thus avoiding a chain reaction move. The original reacting ship gets the defensive bonus against all incoming fire.
I am slightly against this as the 'initiative' rolls already allow crew rolls to determine who moves next - this almost duplicates the same effect. 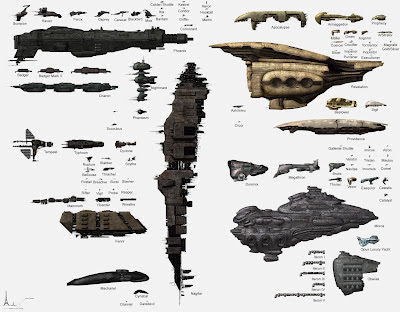 My current hull/damage rules do not allow for the difference between hull types without neededing crazy amounts of dice to destroy them.


DAMAGE/HULL DEFENCE LEVELS
I want to tweak this - the current model means a 4 DF ship would need 12 hits to destroy it - we are heading into 'buckets of dice' territory.

Hull Level Option 1: Use the original method (1x= light damage, double damage = crippled, triple damage = kaboom) but start at smaller increments, by allowing decimals (.5, 1.5, 2.5 etc). This allows a wider range of hull types.  This is an improvement on what I have.

This has middle-range dice total and the middle range of decimals (.5 scores)


Hull Level Option 2:
Change the level the damage goes up: 1x is light damage, 1.5 x is light damage, double = kaboom)
This seems 'neater' but ships blow up faste. A little like the Firestorm Armada thresholds.

This has the fewest dice and a moderate amount of decimals.  However ships do get destroyed sooner.  My current favourite nonetheless.


Hull Level Option 3:
Using smaller increments  (i.e. 1.5 etc) but have "destroy" at 4 x not 3 x which is mathematically neater and makes sense according to the 2 x heavy damages = destroyed rule.

(X)  Whilst I like method 3 as it is the most logical and has the least decimals, it does not solve the 'bucket of dice' problem that I set out to solve....
Posted by evilleMonkeigh at 06:17