The exact mechanics are a little 'grey' as I haven't worked out what dice types to use:
1. all d10s = very easy, consistent for calculating points values etc
2. all d6s = very convenient (everyone has them) but a bit limited in scope; probably use in pairs Warmachine style
3. range of d6, d8, d10, d12 = very convenient for 'modifiers' and crew quality but not everyone is a hardcore D&D player


If a player throws the exact number = to their CQ (i.e the CQ5 player threw a natural 5) then it is a critical success and automatically succeeds. 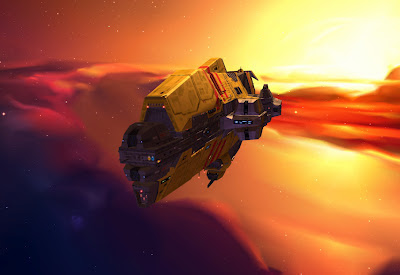 Ahh, Homeworld, how I loved you...
Initiative

Players choose a ship or squadron to activate. They then roll a contested CQ check.  The winner can choose the winning ship to activate first, have the enemy ship activate first, or  choose an enemy ship to activate who is within its CQ range (a CQ of 8 would have a 8" radius)
If the ship is within CQ range of the flagship they can use the flagship's CQ instead.
Recon ships can act as a 'relay' for flagship orders (doubling the range) - which would give scoutships and perhaps escort type ships value besides simply acting as a meatshields for the big hitters.
Note:  Being able to force enemy ships to move first is quite powerful, rather like the 'tailing' rule for aircraft games it can confer a huge advantage. It represents the commander reacting to and predicting enemy moves. This makes low velocity, high thrust ships unpredictable and low thrust, high velocity ships very predictable in their moves.
Initiative: Squadrons
Squadrons are groups of 2-4 ships that are activated simultaneously.  They must be in a range to each other = to half the CQ of the best ship. I.e. A CQ8 and a CQ6 destroyer must remain within 4" (half of CQ8) of each other.

Note:  I will add other benefits to squadrons like linking fire, increasing detection or reaction radius, or providing mutual point defence.  Thus widely scattered ships have more flexibility (each getting individual inititative rolls); but squadrons are far more powerful.