Whilst I don't pretend to be scooping anyone there doesn't seem to be many detailed reviews on this around - this one was the most clear one I could find although I also found a description of a game played, albeit off their official website.

So here goes. Bearing in mind my Warlord Games Pike & Shotte battalion sit assembled but unpainted, this is not backed by playtesting.

The Rulebook (Or "Shiny Factor")
Glossy, with decent production values, it has photos of games and miniatures and is quite a bit nicer than the very bland cover suggests. For $25-35 delivered (18.50+ pound) you fall into the middle zone of rulebooks; you can get good, bad and rather ugly. For the price range the production values are solid, but I wouldn't be buying it for the art, unlike say Infinity the Game or the wonderful Song of Our Ancestors the latter of which is practically a coffee table book.

It uses bold text a lot to emphasize things which loses its impact and can get annoying when every second word is bolded. Others may find it useful though.  I'm going to continue in this style for the rest of the review. 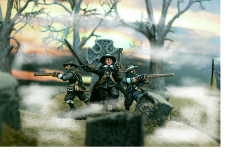 Rather nice photos like these are more inspiring than the front cover: 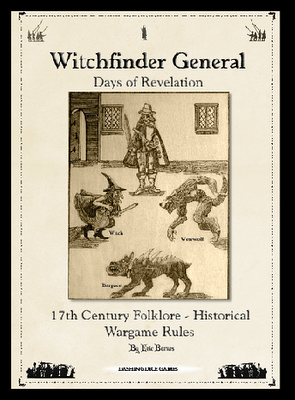 ...which is rather bland and suggests 1970s black-and-white productions
It's kinda retro-cool woodcut, but a cover of a musketeer beheading a werewolf would sell more rulebooks
The Mechanics
It has a integrated IGO UGO system that is a little more involved than the one from GW's LOTR.
Sides roll for initiative, the take turns activating a formation each or up to 3 individual models. In fact it is  technically more an alternate move system. It lacks the ability to interrupt enemy turns (no reaction system), but it's pretty nifty.


Markers, Markers Everywhere
I am not a fan of record keeping, but neither am I a fan of markers cluttering up my game table and detracting from the atmosphere.  WG:DoR uses up to 13 which in my opinion is about 7 too many to remember easily, given the fact I would use generic markers and dislike having to make up special cards or markers for a specific game (if they are vital to the game, they should be included with the rulebooks as a cardboard punch-out, for example)

Movement
Movement is interesting in that figures combine a shorter movement with a dice roll to add to their movement when in range of a dangerous creature. I.e a figure that moves 8" might move 6" + d3 (i.e. 7-9") when in proximity of a dangerous creature.  This makes chases by savage creatures uncertain. Will the werewolf catch you or not?  An interesting idea, but it had individual movement distances for each creature, which besides being a pain to have to remember, showed up the rather limited bestiary.


Combat
Firing is hardly ground breaking, using a d6 roll to hit in the usual manner (ie. 4+, 5+ etc) and the only modifier is range, weapon and shooter experience; which is fair enough given the limited variables of a single d6. It has defensive saves - pretty vanilla -  and a form of suppression, which is refreshing as it is rare for a ruleset from this period.  Most rules assume people would carry on unaffected if a enormous musketball is fired from a shockingly loud gun (accomanied by a cloud of fire and smoke) with narry a flinch.

Melee combat considers facing and range (models have different reach) which may add more tactics but also looks a bit tedious to measure.  I'll have to road test this. However every model type in the game has its own method of attacking, and its own die roll modifier.  Looks rather clunky and you'd be referring to the two-page chart a lot,at least initially.  There are different types of attack, which is interesting (pounce, slash, rage etc).

Injured models have their dice rolls degraded which involves markers.  I'm not a fan of wound tracking in a skirmish game, unless for heroic models. Admittedly grunts tend to be either wounded or dead, but a combat system with specific hit locations is a bit complicated and stays into RPG territory.

Players can push back and take enemy positions, or hold.  They can perform surprise attacks (all 9 creatures/human types have their own roll and traits for this -  little clunky?)  . I like the inclusion of overwatch as it allows a modicum of control over enemy movements.

Morale is pretty standard, and as I mentioned, the suppression effect of gunfire is a nice inclusion. There are also rules for artillery should your game require it.


Force List/Creating Armies
The force list (or bestiary) has no way to create your own monsters.  So you are limited to:
witches, werwolves, hellhounds, generic pikemen, musketeers, swordsmen, cavalry, dargoons & clubmen;  vampires & noctelingers.

There are special rules for preachers, apocatheries, heroic swordsmen; several creatures have special traits like vampires who can shape-shift into bats.

Model stat lines include 15 factors which is about double the amount I find easy to remember without recourse to the rules.

WG:DoR is very specific in its available forces -  more limited in scope than I would like - a 'build your own' ability to modify your monsters and hunters with a point system would allow wider variety. However, it does what it says on the packet - just without as many options as games like Song of Blades and Where Heroes Dare have accustomed me.

That said, the gallery is inspirational.


Terrain
Terrain rules are very detailed, and besides the usual cover saves have rules for jumping, falling, climbing over obstructions and using ladders,opening or smashing through obstacles like doors, battering rams and petards.

I find the rule for foraging (stealing livestock) a fun inclusion.

Scenarios
I like it when a rulebook includes them - there are six  and they seem rather good.  However I feel the game lacks a points system for balancing your home made scenarios and creating your own monsters and heroes.  The guy is there to sell rulebooks, not minis - if I was in it for the $$$ I would make my rules to encompass the most miniature types possible. 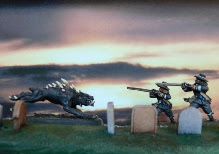 I gotta get me some of those barghests (hellhounds)
TL:DR
I found these rules to be far nicer presented than I anticipated. The initiative system is far better than the usual IGOUGO, but combat is rather complex and marker-heavy - it feels more like a lite RPG. That said, it would probably be full of detail and flavour if you are willing to wade through all the sub-rules. It is very period-specific and lacks a points system to build, balance and modify your own forces.  The rulebook has a slight 80s feel (perhaps from the amount of charts and stats). I'll be reviewing Flashing Steel next as I feel this is a little involved and narrowly focussed for my swashbuckling and monster hunting needs.
Posted by evilleMonkeigh at 01:55