Ships have a Defence rating  which combines armour and hull mass. This is the "damage threshold" at which it takes damage.

Determining Damage
Damage is over half Defence.  Shaken. Ship is rocked by the explosions, which are mostly absorbed by defences. Place a shaken counter on the side of the base that the fire came from. All future enemy salvoes through that arc are -1 to range which stacks with any damage modifiers.

Damage is equal or greater than Defence. Light Damage. Ship takes mostly cosmetic damage which does not impair its fighting ability.Any enemy fire aimed at the ship is -1 to range (permanent)

Damage is double or more than Defence.  Heavy Damage. Ship takes serious damage which impairs its fighting ability. Any enemy fire aimed at ship is -2 to range (permanent), -1 to any of own rolls. A Critical Hit is taken.

Damage is triple or more than Defence.  Ship Destroyed *Kaboom* .

Crippled. This is when the ship takes a Heavy and a Light Damage. As heavy damage, but a second Critical Hit is taken.

If a critical hit is scored, roll d10 and see if it is odd or even.

Critical Hit Effects
Odds = Systems & Weapons
1st hit: Halve weapons batteries and CQ range, no offensive reactions, -1 to own rolls
2nd hit: No weapons can be fired, -2 to own rolls 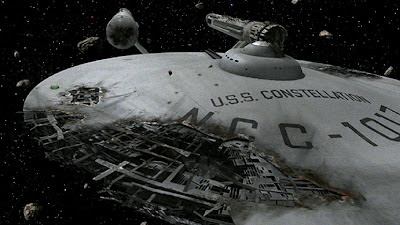 
This Represents engineering teams leaving their stations to deal with damage.
Roll a number of CQ dice equal to the ship's base Defence.  Include any negative modifiers sustained so far this turn. A few "Shaken" results can greatly disrupt repair attempts.
If the dice result in more successes than failures, the the ship may
(a) repair 1 level of hull damage
(b) repair one level of critical damage
(c) repair & refuel, any and all aircraft, missiles, drones or ammunition
Note - ships can only repair back 1 level from the worst damage sustained i.e.
if the ship is crippled, it  can repair back 1 level to heavy damage but may not make further repairs.
If a ship was immobilised by mobility hits, it could only repair back 1 level to half thrust
Free Repairs
Ships automatically lose one"Shaken" marker each turn. This represents shields regenerating and nanobots fixing and sealing minor breaches on the external hull.

The record-keeping toll so far:
The "Shaken" markers can be cotton-wool ball explosions which add to atmosphere <--not bad

For hull damage, I think it is managable - perhaps a single thin poker chip-size token that sits out from under the base of the ship stand, colour coded to show damage: yellow-light, and orange-heavy, red-crippled


Then there is the criticals.  Not sure what to do here to represent them without the game getting messy with too many tokens.
Posted by evilleMonkeigh at 06:12