I've always hated in IGOUGO games how you simply sat waiting for enemies to approach en masse, then blast you without you attempting to dodge or retaliate.  Pretty unlikely and not much fun.

So... when a spaceship whooshes past your ship, lasers blasting, you should be able to react! 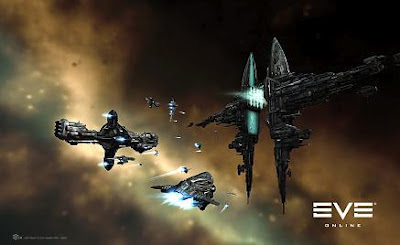 EvE Online. A game awesome and frustrating in equal measure.
Glossary: CZ = Control Zone. A radius around a ship equal to its CQ. So a CQ8 ship would have a 8" CZ.

Reactions
These occur in response to the activated, moving ship or squadron.


There are two types of reaction:
Defensive reaction in response to direct attacks on them or squadron-mates (i.e. if fired on, can nominate to fire back, evade etc)
Offensive reaction, initiated by the non-inititaive moving through its CZ, when the active, moving player has not attacked but the reacting players want a fight anyway....
Reaction Roll
This will be a contested roll. Any failures (i.e. roll above CQ or similar) means
(a) the action attempted was failed
(b) no further Offensive Reactions may be attempted this turn (ships can always attempt to react when fired upon though)
Repeated Reactions*
Record each reaction a ship takes by placing a micro d6 beside it and using the dice to show the amount of reactions taken.
Each reaction modifies the reactee's shots by -1 or similar. This allows a single large ship to be worn down to near ineffectiveness by repeated attacks by smaller ships, or for salvoes of missiles to overwhelm defensive fire.

Ships that react successfully may return fire (hitting and applying damage first, if they won the contested roll) or evade by moving (if they have not already moved that turn) or perhaps apply some defensive bonus (channel power to shields etc). More details in the appopriate sections.
Slow Reaction/No Reaction
Some large or unwieldy weapons (like torpedoes or spinal mount massdrivers) may have a penalty to their contested roll or may not fire at all in reaction.  This penalty may be applied to their reaction firing roll as well.
Posted by evilleMonkeigh at 18:47