I am somewhat of a Song of Blades & Heroes fan, as I enjoy the interesting activation mechanic, the ability to faff around creating warbands from random and cool models, and the ability to run a 3-4 game campaign in an afternoon.  A simple toolbox of fantasy fun.

That said, I felt Ganesha Games's attempts to translate the same mechanics to 1001 different settings was a mixed success - I felt Flying Lead was a bit of a mess - a good example of trying to make a good system work in a period for which it was not designed.  I am a firm believer that there is no universal game engine that works for every single period or genre of wargame. I call it 'sequel sydrome' - we see it in the movies as studios try to cash in on a successful brand.  For small independent wargames designers (Two Hour Wargames springs to mind) the temptation to regurgitate a sucessful formula must be just as high.

So I'll be interested to see how Flashing Steel differs from the original, given that I feel I could pretty much play a swashbuckling game with the original fantasy rules as is...

Presentation (The "Shiny")
Well it is a pdf so not much to say here.  At least it is only 40 pages to print out and prints out well to a B&W printer.  Not a lot of wow in a pdf to be sure. 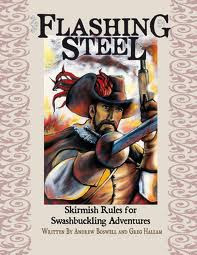 Don't get too excited about glossy hardback rules - it's a pdf!
Mechanics
What I liked about SoBH is that all key info could be noted on a small triangle that also served as a measuring stick.  Allowing only 3 ranges - short medium long (approx 7.5cm, 12cm and 18cm) is limiting but is rather easy to remember.

All models had a Q (kinda a 'Quality' or skill) rating (of usually 2-5) - which was imporant because rolling under this number determined how many activations you got.  Unsurprisingly FS uses the same formula.  It is a pretty nifty one as it adds an element of tactics/risk vs reward every time you activate a model.

Basically, you choose how many dice to roll against the Q, and each success allows an extra action or move by the model. But the more dice you rolls the greater the chance of failure, at which point you totally lose your turn and the initiative passes to your opponent who gets to move until he fails (or moves all his models).

Each success means you can choose from a wide range of actions including getting up from prone, to firing or reloading, opening doors or swapping weapons.

Improvements
A player can 'reserve' 2 actions and use them to interrupt an opponent's turn, where he can take only 1 action.  This is serves as a kind of versatile overwatch, with its own tradeoff - lose 2 actions now, for the chance of a lesser action that could be timed perfectly to best hassle your foe.

Group actions in the newer Ganesha titles have made groups more useful.  The base SoBH tended to punish lower Q as horde armies of weaker troops were difficult to control.  A leader character can order troops close by to take actions -a  little like the Heroic Actions from LOTR.  A leader can spend his actions to make a group of grunts more effective.


Combat
Troops add their C (Combat) skill to a die and compare them.  If the winner beats his foe, his foe will fall to the ground on an even roll and be forced back on an odd roll.  If the winner doubles his enemies scored, his enemy is out of action.  If he triples the score the enemy is messily and instantly killed.

This is fun and surprisingly cinematic, with figures being forced off ledges and heroically parrying deadly attacks when fallen.

FS differs from SoBH by having "better" and "worse" weapons list which can change these results slighty if you have mismatched fighters (i.e. pike vs knife).

Firing has a lot more modifiers.  There are some fun new effects where low quality troops can accidentally discharge their weapons or misfire. There is rules for the wind blowing clouds of blackpowder smoke across the battlefield, creating moving cover.

Other Stuff
Quality Checks
These are needed to do difficult feats like cutting the rope holding a chandelier or shouting out  a warning before being silenced, and range from the tricky to the very difficult. They are based on a Q roll.

Swashbuckling Checks
These are used to perform swashbuckling feats like disarming their foes or backflipping out of the road. It is based on the C roll and a failure could leave a model flat on its back.


Morale
This is a simple check when a leader or half the force is lost.  I miss the old "gruesome kill" rule though.


Special Rules
The ability to create your own character is a Ganesha Games trademark.  Various skills are assigned points values - from an "Acrobat" who gets bonuses to Q tests when climbing, falling or leaping, to a person who can use "Double Pistols" for rapid fire, to "Duellists" who get a bonus when facing a similar opponent, "Drunkards" who lose Q but gain C and morale.  Traits can even be negative, like the "Guardsman" trait which ensures the miniature will be merely a minion, grunt, or unlucky extra.

There are lots of these (35+) but as models stat lines consists of 2 scores (combat, quality) it is easy to check any opponents' special rules, so you don't get "Warmachined" i.e. defeated by an super-uber unexpected trick your opponent possessed; which caught you unawares because you did not understand every naunce of the 500 special skills your opponents force possesses. Not bitterness there *cough*


Campaigns
There is a cool little campaign generator which explains terrain, mission, motivation, and if needed, opposition. An example of a mini campaign is provided (3 x 45min games)


Pirates
FS is aimed pretty obviously at the "Three Musketeers" and "Pirates" genres.  It has quite a few fluff pages giving stats and traits, and historical data on a wide range of famous pirates. 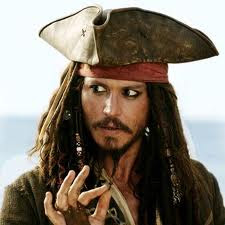 He has a jar of dirt - or is that a peanut?
Thoughts
I often thought SoBH stats were TOO simple. Lumping defence, attack and shooting into a single combat valueis carrying the simplification process a bit far.  I felt it did not show the difference between a barbarian with an axe and loincloth and a dwarf in plate armour - they might both be C3 fighters.  People will argue the 'traits' were supposed to do that, but separating the universal Combat stat into "Attack" and "Defence" stats (maybe even a "Missile" stat) would have added more richness without much more complexity.
Also, using a d10 would allow Q and C ranges from 1-10 rather than 1-6, giving a wider range of ways to describe characters. This would add NO complexity and again give a wider range of character stat choices.
Ironically, in FS I am not so worried about this. As in FS the fighters are always humans, similarly attired, there is less need for a wide variation than a fantasy game.  A swordman and a pikeman, both in leather armour, need less differentiation in stats and fighting skills than a dragon and a gnome.
FS has a wide range of traits, but has 0 allowance for monsters and creatures like I had hoped for.  It is far more specific and less of a random toolkit than SoBH but seems a more naunced, balanced game.
TL:DR
Activation system is tactical and balances risk vs reward - this is a cornerstone of the successful Ganesha formula.  The gameplay is simple and cinematic, and can be taught to a new player in a few turns - they are a good series of rules to teach to kids.  It's a pdf so 'new shiny book' excitement is low.  FS seems to refine the SoBH formula , but the refinement comes at the expense of the flexibility that made SoBH so versatile.  A simple campaign can be run in an evening, and the 'build your own character' ability is fun as always.  A definite must for pirate or three musketeer gamers but more historical than pulp/fantasy.
Posted by evilleMonkeigh at 06:24