I am intending to playtest a series of small games with the LOTR:SBG and the skirmish campaign spin-off  "Battle Companies". This game is remarkable in needing only a few plastic miniatures. Both warbands in the game cost under $6 each (including a metal "major hero" for each) - this is off ebay of course - where LOTR minis are currently both plentiful and cheap.

The original rules are here as found in White Dwarf 297.  They were tweaked in White Dwarf  311 and it is this latter version I am using as it allows three heroes to start, not just one; it has more skill "upgrade" choices, and it a little better balanced.

Selecting Missions:
I am actually using a deck of cards and the Malifaux: Rising Powers rulebook* (p.42-43) as they offer a myriad of mission choices including "hidden" missions which your opponent does not know about.

In an amazing fluke, we both got the same mission: "Slaughter." So much for special missions. Another straight up fight then.

This whole pregame process took 10 minutes.
(*Before you rush out and buy it, can I say the mission tables are only good use for this rulebook besides as a door-stop)


BATTLE REPORT
The wife won deployment. She had secretly chosen a scheme "have more figures in enemy deployment at end of game" from the Malifaux scenarios (which I was unaware of) so she quickly advanced down the side of the board to accomplish this. 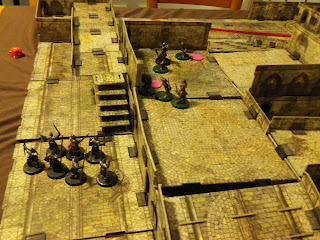 The men of Gondor charge down the side of the board to achieve their secret "breakthrough" scheme to control my deployment. I angle my archers towards the wall for a free potshot. 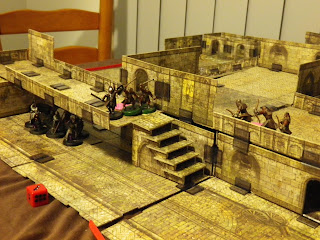 I attempt to control the top of the steps whilst peppering the enemy with fire but the men of Gondor duck out of sight on their way to my deployment zone. 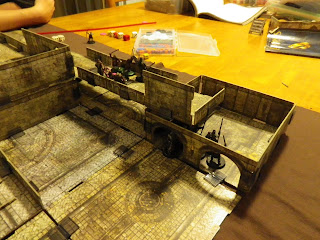 As they run around through the building they are fired upon by one of my archers. Archer #1 claims his first victim of the game - an enemy bowman. They get into cover but their reprieve is short lived. 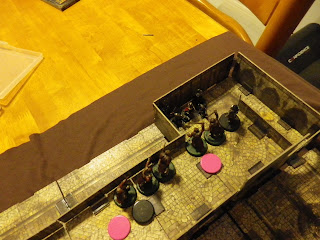 As they charge up the steps they are met with a volley of exceptionally aimed arrows.  I concentrate my fire on the spearmen to avoid their "supporting bonus."  Archer #1 causes a wound on a heroic Gondor spearmen. He uses his "Fate" to cheat death.  Archer #2 kills another spearmen with a "6" to the head. 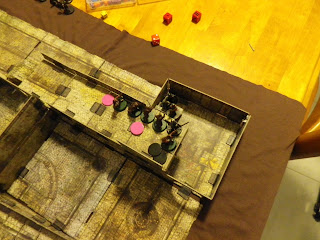 Archer #1 kills the last bowmen (his third wound of the game - remarkable with the weak orc bows) as the forces come together at the top of the steps. Battle is joined in a fierce melee.  Our captains meet in battle and with both rolling "2"s my superior fight value wins the day. However the Gondor captain cheats "Fate" and is merely pushed back down the steps.  In a last desparate fight, the two orcs take on a Gondor swordsman supported by the heroic spearmen. They kill him, at which point (with a 0-4 kill/death ratio) and unable to complete her objective, my wife withdraws. Playing time: 30 minutes.

Influence:
Isengard got 2+2 for win (4 influence). As it has 3 points it can roll on the Influence table. The roll of "4" gains an extra scout uruk-hai with a hand weapon (and no shield). It has 1 influence left over.

Gondor got 2 for participating (2 influence). it can only by wargear as there is not enough (3pts) needed for an Influence roll. While it could buy equipment or weapons upgrades, Gondor decides to save all its influence for next round to replace the dead spearman.

The postgame check took 10 minutes - so 50 minutes to play the game from start to finish although I could trim this to 30-40 minutes with practice.

THOUGHTS
Only one guy (my orc archer who scored an improbable 3 wounds with a series of sixes) got to "level up"; which was a bit disappointing. However the 30-minute game time would allow 3-4 games to be played in an evening allowing a satisfying "narrative" to be developed.  Having to ebay a metal $3 crossbowmen mini brought my total to $9 for Isengard whilst Gondor stayed at $6.  Definitely an affordable way to play! The softcover "Mine of Moria" A5 rules can be picked up on ebay for $10-15 if you don't have the rules (and, like me, don't fancy shelling out $50+ for a fancy hardbacked tome.)

The small model count made every shot or melee a matter of vital interest - the sharpshooter orc scout practically won the game causing 3 wounds.   On the downside, having less units and limited unit types to work with made the game a little bit more bland and less tactical than the other bigger LOTR games I've played - I felt I won largely due to my (unusually) excellent archery die rolling. Also, the relatively low-power Battle Companies heroes lead to less opportunities for "resource management" with Might Will and Fate, which is where LOTR gets a lot of its flavour. This may improve as the heroes "level up" though.

I'll be interested to see how warbands develop - compared to Mordhiem which could become "broken" with certain combinations of units and equipment. The Battle Companies options are a lot simpler though so should be less "bugged." I have my suspicions about high-defence dwarves and sharpshooter elves being possibly OP over a long campaign.

TL:DR
Blander gameplay than larger LOTR:SBG games, but quick (30 minutes); simple, cheap, and most of all, fun. It would be very easy to develop a "narrative" with a sequence of battles.  The tiny amount of minis and low, low cost  ($6 per warband) makes this easy to recommend - I'd be surprised if most gamers couldn't lay their hands on 10-15 LOTR plastics which they or a gaming partner already has.  The typical GW rules style makes them easy to learn and the campaign system, where individual minis gain new equipment, skills and traits over games (or even acquire injuries or die) is always  fun.

Recommended: Certainly. Vanishingly cheap, simple - a very accessible entry to the addictive world of campaign gaming.
Posted by evilleMonkeigh at 04:19