Finally I remembered my camera.

This was a 200pt game - armoured high elves, lead by Haldir, against a troll, goblin captain, and a swarm of perfidious goblin underlings.  As I was too sick to go to my regular game, the wife filled in, and did well in her first outing.

Terraclips Terrain
I have reviewed them here but it is worth re-emphasizing two things (a) how easy it is to store them flat and (b) the ridiculous amount of time needed to assemble it.  Kinda counter-intuitive.  Technically, it is very transportable - but in practice I would never use it at my local club as it takes an hour to assemble a decent board.  That said, my opponents always enjoy playing on its detailed, multi-leveled surface, and the cardboard is surprisingly tough and forgiving. A quality product, but one that lacks a clear role.  In the game pictured I used about one and a half packs of the Streets of Malifaux set.

Disclaimer: all my minis are basecoated only - as I refuse to play with unpainted minis but didn't have time to detail and base both sides.

Set-up
As usual I split my force in three - the cave troll seemed to attract a lot of attention, so I used only a few goblins to support it in the centre, sending the bulk with my goblin captain on the right flank, and a band of 4 archers around the left.  As usual my opponent responded to my three-pronged attack by splitting the force into two - the bulk of the archers facing my small goblin force, and the rest with Haldir up the centre.

Early Game
I moved my troll up the middle to get attention and snuck my main horde around to the right (they are out of sight at the top of the board) - I planned to use their climbing to assail my foes from the flank and rear like last game. The wife started to move her forces together which was what I did NOT want. 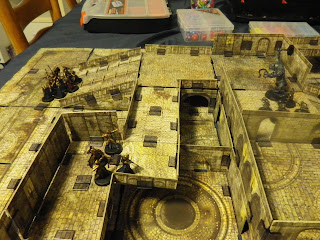 All eyes on the troll - while the sucker punch comes around from the right....
There are also a handful of goblin archers hiding behind the doorway at the bottom of the map.

I had to try to get some separation between her forces so I did my now-standard "feigned retreat" - as anticipated she chased the troll up the middle; firing at its leathery hide with no effect. 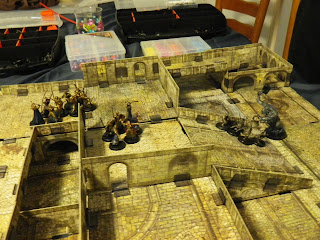 I retreat to buy the flanking force time to get in position....
Middle Game
I spring my trap. There is the usual "wtf" moment as the goblins scurry over the walls.  I spend a might point to seize the initiative. After being peppered with elf arrows, the goblin archers on the left also climb over from the other side and join in. 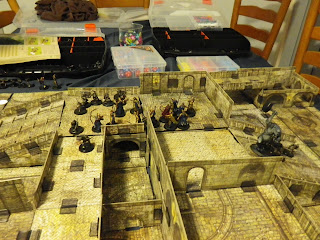 The trap is sprung! Goblins climb over the wall to the top of the map and engage the elf rearguard 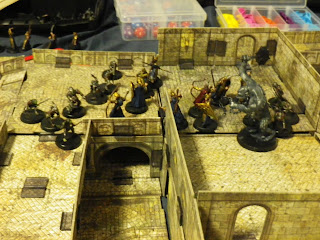 With superior numbers, they quickly force the pointy-ears back

End Game
I force the elves back, but my feigned retreat with the troll meant it took too long to get my heavy hitter into combat. Meanwhile, my puny gobbos proved a bit too easily carved up by those shiny elf blades.  After Evil initially holding the advantage, both of us reached the "Break Test" on the same turn. That said, the"troll decoy" did keep the enemy broken up into two bite-sized forces so perhaps it was a fair trade. 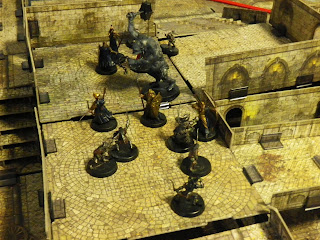 There was a last fight, with the goblin captain breaking and fleeing but the troll and a few others proving surprisingly resilient despite their courage of 2.  Haldir used his might to inflict two wounds on the troll, which passed several break tests along with a companion goblin who was eventually hacked down.  Running out of might, Haldir finally fell to the troll, in a literal fight to "the last man standing." 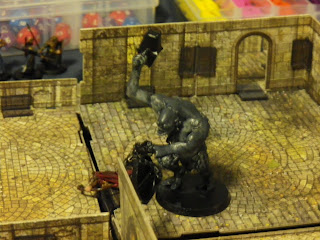 The fight lasted surprisingly long - after a few goblins bolted off, both sides passing their break tests with amazing valour

A good game - my wife easily grasped the basics after a few turns; arguably she missed victory due to my superior die rolling in the endgame - those goblins just refused to flee! (Which, gracious loser as she is, she reckoned was due to loaded dice or some sort of craps-style "blanket roll" trickery on my behalf).

Thoughts
There was less maneuver in this game as my wife nervously kept her forces close together and wouldn't be lured too far apart.  Again LOTR is so simple - and the activation mechanic, use of Might, Fate and Will for resource management (to win fights, and alter the activation sequence) makes this far superior to the cheesy codex list-mongering of 40K.

The goblins are quite powerful - they have access to hordes of cheap troops for outnumbering purposes, and a few troll heavy hitters. Both times I have used the goblin agility to climb vertical terrain and swing the tide of battle - so despite their rather bland "special power" it has been used effectively.   The built-up terrain hindered the elf archers. I'd be interested to see how dwarves would go, but sadly I can't get them on ebay for love or money (and strangely, buying them new at $70 for 2 sets of 12 plastics doesn't appeal). 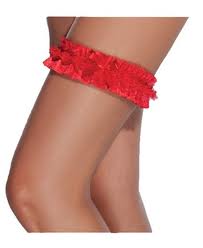 I'll do almost anything to get some cheap dwarves - including waxing my legs, as you can see