I've had my eye on this for a while but had been put off by the "buy in".  I know the Gripping Beast minis cost pale in comparison to GW fare, but two small starter warbands combined with the "specialty" dice ($84 x 2) and the rulebook ($35) are a significant investment when no one locally plays it.

My starter minis have been caught up in the Maelstrom Games mysterious "stock reduction/move" (which is looking more and more like a Ponzi scheme) so my playtesting has been limited to proxying some LOTR minis. 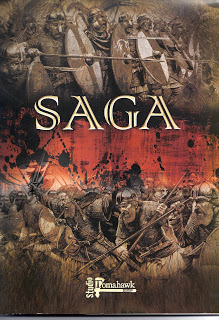 A slim but well-produced and very practical rules set, with lots of examples and summaries

The Shiny
I was a little surprised how thin the rulebook was - when I initially ripped open the packet I thought it was only the battleboards (of which 4 were included). Softcover, it actually weighs in at 75 pages - full colour throughout.

This is evidently a set of rules that has been carefully playtested, and created by gamers, for gamers.  It is easy to read, and includes not only a quick reference page, and photocopyable measuring sticks and tokens, but lists a section on "often overlooked rules", has a solid index, and plentiful examples of gameplay.  In fact rules are summarised at the end of each chapter making this rulebook very easy to read and use. One of the best laid out, user-friendly rulebooks I have come across in a long time.

Army Building
This is dead simple - for 1pt you get 4 Hearthguard (elites); 8 Warriors; or 12 rather rubbish Levies (the horde option). Most armies are 4-6pts and range from 20-70 miniatures. This applies to each faction. Factional differences are shown due to different options in battleboards.

Whilst the battleboard mechanic is a great idea, I disliked the $18 custom dice, especially since a normal d6 would have done the job just as well...

The Battleboard (Orders Phase)
SAGA is a game, not a simulation.  Whilst without the ridiculous rules cheese of say Malifaux or Warmachine, the game hinges on good management of the "battleboard" to enable heroic actions from myth and legend. Each unit generates a "SAGA dice". These are rolled at the start of your turn. Various dice combinations can be used to activate SAGA abilities.  SAGA abilities differ between factions - some can be activated more than once - and SAGA powers can be combined to create powerful effects.

Managing SAGA dice and your battle-board is a mini-game in itself. The rulebook provides good examples of how this works.

Movement
This is very standard. Troops move a standard range and stay within cohesion range rather like 40K.  Uneven and impassable ground have typical events. Units that move or activate more than once accumulate Fatigue.

This Breton starter warband is $118 including SAGA dice - expensive for a "historical" game - the buy-in is disturbingly similar to GW products
Shooting & Melee
Ranged units can engage others within range and LoS.   Levies & Warriors get 1 dice per 2 models; Hearthguard get 1 dice per model.  Attackers and Defenders can use battleboard abilities. Attackers check their rolls - each roll that scores above the enemy "Armour" level scores a hit.  Defenders then can roll a dice each hit. A 4+ cancels the hit.  Cover cancels hits on 3+.  Melee works in a similar manner - however elite troops and warriors have even stronger advantages over levies and combat is more lethal. Units who take the most casualties in melee will retreat. Each unit in melee gains Fatigue.  As units are lost, so too are their accompanying SAGA dice, reducing the capabilities of your warband.

Fatigue
Besides the battleboards, I found this mechanic the most interesting.  Units may accumulate fatigue - levies and warriors may accumulate 3 whilst elite hearthguard can accumulate 4.  Once a unit reaches its limit it may not be activated except to "Rest" and fights with only half the usual dice in melee.

But this isn't that bit that interested me - it was the ability to "spend" an opponent's fatigue points!
If fighting a fatigued opponent, you can "spend" one of their fatigue tokens in order to increase your armour; or you could use an opponent's fatigue to reduce their movement distance. The fatigue system provides a simple but interesting risk-v-reward resource that adds depth to SAGA. Fatigue tokens are the only tokens used in the game (a nice change - most new games have a million tokens and unit cards cluttering up the table).

Other Stuff
The core rules encompass 35 pages - the remaining 40 include miscellaneous rules such as your Warlord (a heroic character who generates extra SAGA dice and is very powerful in combat); faction rules for Vikings, Normans, Danes and Welsh; stats for "named" heroes like Harald Hardrada or William Duke of Normandy; a list of all SAGA abilities, six standard scenarios as well as a scenario for a 3 or 4 player battles.

TL:DR
SAGA is simple game, with two clever mechanisms tacked on - the use of the "battleboard" and "fatigue" introduces another level of tactics and resource management, whilst not complicating matters - always a good design point.  A game for heroic actions rather than a strict historical simulation, SAGA lacks a morale system and as the game is scenario-based, there is no reason not to suicidally sacrifice your units to accomplish objectives.  The faction-specific battleboards provide the ability for some fun meta-gaming and heroic actions without the over-the-top cheesiness or "he who knows the most rules wins" of Warmachine or Malifaux.   The rulebook is nicely presented and very gamer-friendly - one of the best I have come across lately.  I'm not a fan of having "special dice" (especially at $18 a set) and although you can convert your own it seems more trouble than it is worth. I also found the cost a little daunting - one 28-man starter army was $100 which is much steeper than the usual cost to try a skirmish wargame*

The game seems to cry out for a campaign system where warbands can battle for land and renown, and perhaps gain "experience" and abilities - I notice there are quite a few home-grown campaign systems springing up on the net.  An "official" campaign is possible, as  Gripping Beast have already published two supplements, each introducing 4 new warbands, so the game seems solidly supported.  Dark Age raids are ideally suited to skirmish gaming but it is rumoured that Arthurian and Crusades versions in pipeline.  SAGA seems a solid club game and a good introduction to historical gaming, and I can see it attracting new players to historical gaming a la Flames of War.

Recommended?: Certainly.  The battleboard and fatigue mechanics are great, and I think both historical and non-historical gamers will enjoy this one. I'd like to see a campaign system supplement; but all in all, a good intro to Ancients/Dark Ages gaming.

*Bulk plastics: If you used Wargames Factory plastics and did a bit of creative kit-bashing you could make warbands for much cheaper.  At 32 minis for $20, if you shared buying 3 boxes of say Fyrd, Thegns, Bondi or Huscarls with a mate, and mix and match body parts a bit, you could both end up with 48 minis for $30 - a much cheaper proposition.
Posted by evilleMonkeigh at 00:11