I think Infinity is one of the best skirmish games out there, but it has disappointed me somewhat:

#1. Tendency to add ever-increasing numbers of weapons and gadgets
Infinity's strength is in its basic mechanisms and unique "ARO" reaction system, but now it is in danger of getting smothered by trying to react to "special rules" (110+ at last count).

#2. The Paradiso supplement lacked a meaningful advancement system
I was hoping for a Mordhiem-style warband system but in Paradiso only one soldier (the Spec Ops) could actually be upgraded in a campaign.  So out of your 10 or so guys, only one guy learns from his experiences? Meh.

So I am going to create a modern campaign, to "fix" these gripes by stripping out the more esoteric rules, and also paint up some of my awesome Empress moderns (which will also serve in Battlefield: MMW, an innovative miniatures game which mimics the PC franchises CoD, Battlefield 3 and Ghost Recon and has game modes ideal for multiple player fun. 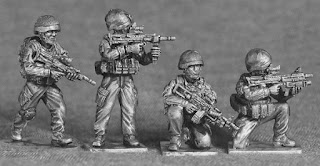 The Empress modern range rivals the detail of Infinity miniatures themselves, at a quarter of the cost ($2.50 vs $10 a miniature)


#1. SIMPLIFYING INFINITY
Removing the weirder sci fi stuff (also the most complex "special rules") should be simple. I'm going to keep weapons as similar to Infinity ones as possible for the purposes of balance.  For "damage" I'm going to align it to 9mm (11), 5.56mm (13) and 7.62mm (15).

Special Skills
The skills are restricted  and usually represent the lower end of the spectrum of Infinity skills. I'm going to keep the following skills:  Airborne Deployment L3, Mimetist/Limited Camouflage, Climbing Plus, Doctor, Engineer, Forward Observer, Infiltration L2, Inspiring Leadership, Martial Arts, Mechanised Deployment, Religious Troop, Terrain, Valour L2.
Equipment
The only equipment retained from Infinity is the Medkit.  Armour will be 1 (helmet) for basic troops, and 4 if soldiers have both helmet and bulletproof vest.

The bare metal photos do not do the models justice.  They are have an elegant simplicity and good proportions. I give them a 8/10 - they now edge out the Perry line as the best historicals I own.

Squad Weapons
5.56mm Assault Rifle
This is your standard 30-round mag rifle such as M16, AK74 etc.  Treat as Combi Rifle.

5.56mm SAW/PKM
Portable sustained fire weapon.  Treat as a Heavy Machine Gun with a Damage of only 13.

This is from the Red Star Miniatures website.  Empress is a distributor for their wonderful Chechyan/Russian range and I suspect both companies use the same sculptor.  Check out their gallery dioramas - they look like news photos....

Claymores
As per Anti-personnel mines.

40mm Automatic GL
As per Kaytatusha. 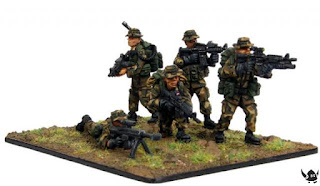 I also have some Eureka miniatures. They are a little chunkier then Empress but very solid sculpts and paint up well (this is a photo from their website).   Both Empress and Eureka have excellent service and communication and I was impressed with both. I recommend you check them out.

I may fiddle with the stats mildly but as it stands it seems a solid selection, a bit easier to remember than the 61 weapon types available in Infinity itself.   Part II will be working out campaign and sensible "advancement" perimeters.  Part III will be scenarios, missions and (hopefully) an AAR.

The core rules I am using are free from the official Infinity website.
Posted by evilleMonkeigh at 01:26