Frustrated by a painting malaise at 28mm level (both my vikings and FIW), I decided to get cracking with some 15mm - a scale I am always guaranteed to paint.A long browse through GZG's website showed me nothing that really "grabbed" me but I remembered being struck by some of the Antenociti's Workshop G.O.T. range a few months back, that had been released in 15mm.  A few clicks later and a parcel was winging its way to the Antipodes.

Price & Customer Service
Using GZG's metal range as a "benchmark", an APC should be around $13-15 for scout vehicles and APCs.  The resin AW stuff weighed in at $11.50 for APCs and only $7 for the admittedly smaller scout cars.  So overall, I saved around $16 buying the resin models from AW instead of GZG.

Delivery was prompt. I ordered simultaneously from AW, GZG, Critical Mass Games, Rebel and Khurasan - all famously quick to pack and send minis - and the AW currently has a 3-day advantage over the other companies, so you can mark me down as impressed. 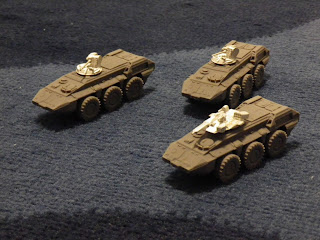 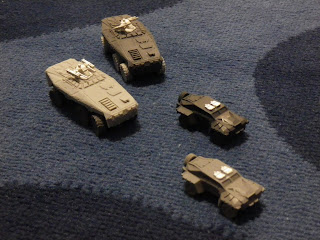 However I fell in love with the "posability" of the separate tyres from the "Hunchback" APC models.

I do really like the "posability" of separate tyres, allowing the vehicles to look like they are turning, or traversing uneven terrain.  However I am rather dubious about the long-term feasibility having resin wheels glued to rather long thin resin axles. 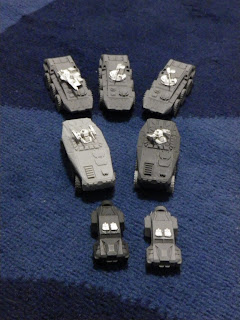 The total force set me back $60. I'd like to have bought at least an extra APC of each type which would allow me to fully mechanize two platoons.

Casting Quality & Detail
The details are good.  There were a few mold chunks of resin but all were on the underside of the hull and quickly scraped off with a hobby knife. Annoying, but certainly not a major issue.

Details are good, and are better than the GZG metal vehicles that make up the bulk of my 15mm armour.  The AW wheels LOOK like wheels. Not LEGO wheels or some weird liquorice. 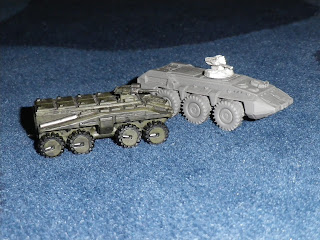 Here is a AW APC compared to the nicest GZG wheeled vehicles. Most GZG stuff has a much more exaggerated look.
Scale
Often the small scout vehicles/jeeps in 15mm look  like they wouldn't fit a single guy inside, let alone 4 or so.  How does the AW stuff shape up? 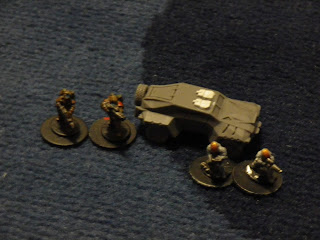 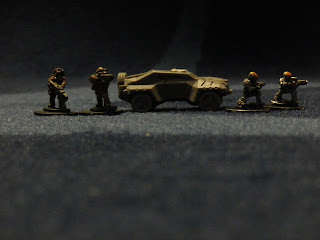 It's not a HMMVW, that's for sure. Probably only a 2-man crew by the looks of it. 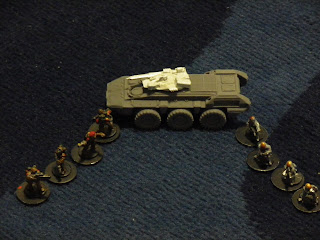 The Striker-like APC could fit 8 guys, with a bit of imagination and some Vaseline....

TL:DR
Quick delivery, solid pricing, good detail (some of the better 15mm vehicles I own, although I do like the GZG hovercraft series), nice design.

Recommended? Yes.  I'm making up another order in the next few days for some reinforcements and a few of their other designs.
Posted by evilleMonkeigh at 05:44