In blog of modellers whenever they make terrain they seem to do amazing masterworks, beautiful diorama tables that look like they took $500 of gear, and a small team of experts 500 hours to make.

Then there are the rest of us. I personally find terrain secondary to collecting, painting and playing with models. For me, making terrain is like saying the people who built the stadium are more interesting than the footballers playing inside it.  But I don't like playing on a potato paddock so we SHOULD at least mark the field and put up goals, so to speak.

Personally, I simply care if my terrain is unified - not the usual gothic 40k ruins, paper terrain and some random rocks on the same board.  It's like painting models - it doesn't have to look good, but it should look like you made an effort.

So - could I make a quick "free" building in 30 minutes? I looked around and spotted a bunch of drawers I was about to throw out as some of the internal shelves were missing. 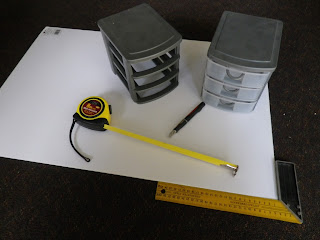 It reminded me of some unfinished apartment buildings that seem prolific to Istanbul.

They seem to dot the landscape - only the concrete "skeleton" is in place.

Armed with some foamboard, which I had leftover from my "Infinity terrain" project, I quickly set to work.

I would replace the "shelves" with "stories" made of foamboard. I could slip them in and out just like the drawers, making it easy to place troops on different levels.  I wasn't even sure the scale - I popped some 15mm and 28mm and I decided the 15mm was more "to scale." 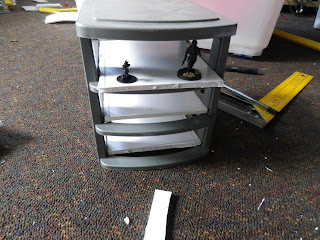 15mm seems more in scale for an apartment building.

I measured the original plastic shelf bases and cut foamboard to suit. A blunt knife and impatience means I butchered the job a bit, but we're trying for a 30 minute deadline here... 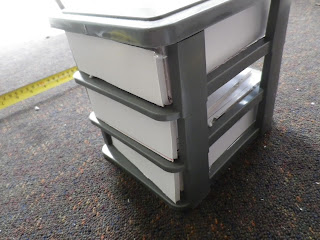 Sadly only AFTER I had cut, did I realize that the end-walls protruded 1cm, as I didn't take into account the .5cm thickness of the foam-board itself. 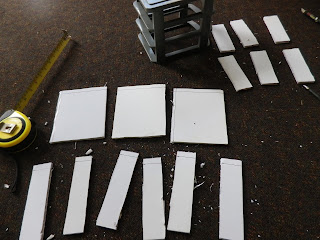 ...so I had to pull things apart and re-cut them down to size. 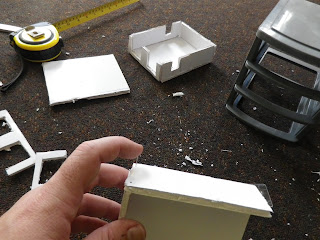 I use pins to "pin" things into place. You can PVA glue them later but this is a rush job. 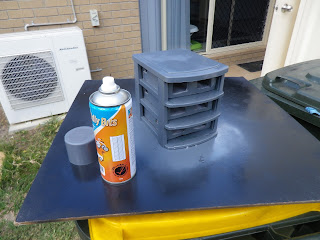 I gave it a quick squirt of grey paint before the glue had even dried. 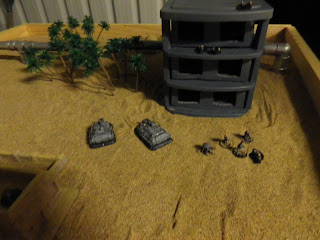 Some GZG UNSC use the building in a game later that night.

Summary:
Is it rough? Yeah.  Am I proud of it? No. Could I do better next time? Sure.

I'm confident I can make the second building in 15 minutes.   I was a bit unhappy with the building - the 5mm foamboard is too "thick" and "rough" for 15mm.  Plasticard would of course be better but (a) it's much more expensive and (b) I don't have any handy. You could easily do a much, much neater job with more patience and sharper knife, though.

I'm going to finish it with glass windows made of the plastic off old model boxes but I was up to my 30 minute limit so that's how it will stay for the moment. My aim: if I spend only 30 minutes per weekend, in 4-5 weeks I'll have a respectable 15mm facility/outpost.

This isn't about my awesome terrain-building skills *cough*, but rather giving an example of how you can make rough but "acceptable" terrain rather quickly and easily, with limited time and budget.  There's plenty off stuff lying around at home that might look good on the game table with a quick spraypaint*.....

Next weekend, a new building....

(*Actually, just realised as I typed this that the "oil pipleine" in the background of the last pic is simply a piece of PVC pipe with a coat of silver spraypaint)