I'm pottering about in the shed again, and have been inspired to dig out my 15mm stuff by a rules book that arrived in the post:


PMC 2640
This is a hard sci fi game by Marcin Gerkowicz, who did Hind Commander – a niche and rather interesting game of modern helo combat.   PMC is more mainstream – I presume aimed at the burgeoning 15mm sci fi market, joining a crowded field with, Tomorrow’s War, Gruntz and more recently No Stars in Sight.  It’s gritty sci fi, aimed at playing PMCs (mercs) as the name suggests.

The Shiny
It’s a softcover 110 page book, with B&W internal illustrations.  It has a thorough table of contents but no quick-play rules or index.  It’s easy to read, and despite being (presumably) translated from Polish, this is not noticeable apart from occasional idiosyncrasies in word choice.  There are about 25 pages of fluff and background information, and snippets about the game universe scattered throughout the book. At $24 and $10 postage it is sensibly priced (disclosure: my copy was a review one). 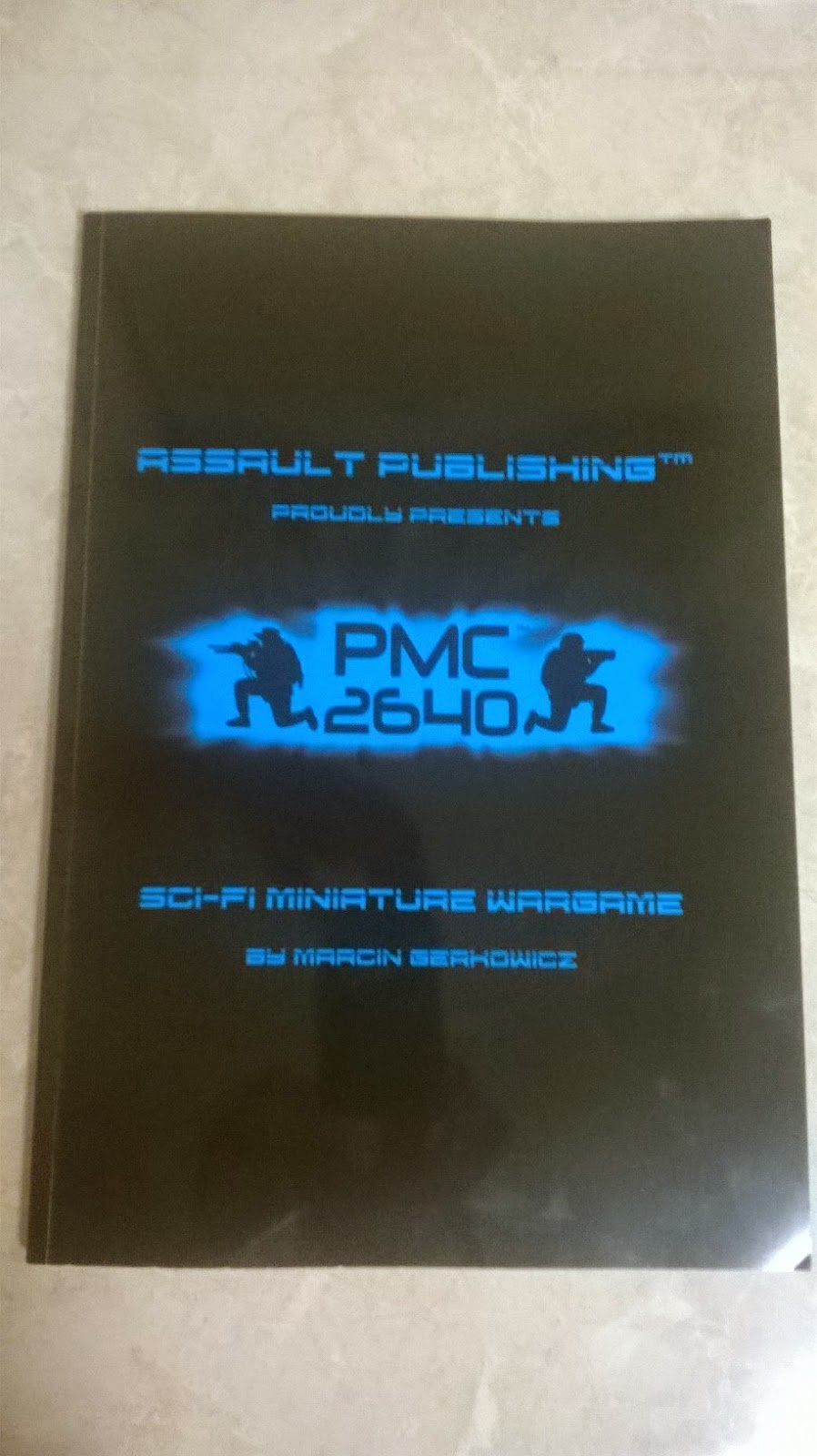 PMC 2640 has a colour cover and easy to read B&W interior.
Yes, I'm still stuck using the smartphone camera... :-/
Mechanics
The units are rated I (rookie) through V (elite).  Most units are 6-men strong (like Gruntz) and cannot be altered.  The units have a sensible stat line:
Firepower (damage and accuracy)
Range (shoot range)
Defence
Assault (melee)
Morale

I like how WYSIWYG is ditched in favour of “RCL”  Recognizable & Cool Looking – as the unit determines the function, the exact gear used by soldiers does not matter. I.e. in a MG squad the exact amount of MGs carried does not matter – it is the role of the squad that matters.  Units stay within 1” coherency.

At the start of a turn, both sides remove suppression markers and any troops broken due to morale.  Then any reinforcements are brought on.  When it is time for action, the activation is alternate move (both sides take turns).  Units can Move,  Fire (aimed), Move+Fire, Move+Melee, or perform a special action (hack a terminal, foe example).

Shooting
A single d10 is rolled for each unit, with modifers for the # of soldiers firing, range, cover etc.  A roll that exceeds the target units’ defence scores hits equal to the amount i.e. a roll of 8 vs Defence 6 scores 2 hits.    Hits are then rolled on d6 to see if it is ignored, scores a suppression point, or kills an enemy (adding two suppression points as well).  Next turn, suppression can be removed by rolling #d6 = to Morale and removing markers on each 4+.  Suppression can be marked using coloured d6s beside a unit.

Whilst soldiers can react and fire at assaulting enemies charging into contact, reactions have been deliberately omitted, to encourage active movement and to speed up the game.  I like how the author explains design decisions in little text boxes.  There is a “crossfire” rule which encourages pinning and flanking units.

Vehicles, Aircraft & Drones
These use the same rules as infantry – which avoids having “rules within rules”  - with merely some changes to movement and damage resolution that follows similar principles as infantry – shots that hit are ignored, do a damage point, or D3 damage.  When a vehicle accumulates too many damage points, it is abandoned, set on fire or explodes.   The rules are much simpler than Tomorrow’s War (where I commonly exclude vehicles due to the special rules resolutions.)  Aircraft use similar rules to vehicles but obviously differ in movement (and have some extra rules like “strafing.”)  Drones are pretty much standard units with a few changes (they can automatically remove suppression, and can be hacked, etc).

Terrain
PMC 2640 uses primarily area terrain, i.e. units further than 2” of the edge  of a wood cannot see into/out of it.   I like the rule where units half in/half out of a terrain feature suffer the worse effects of both (i.e. unit half in woods gets no cover AND has move penalty) – it naturally encourages players to be clear on their unit placement. 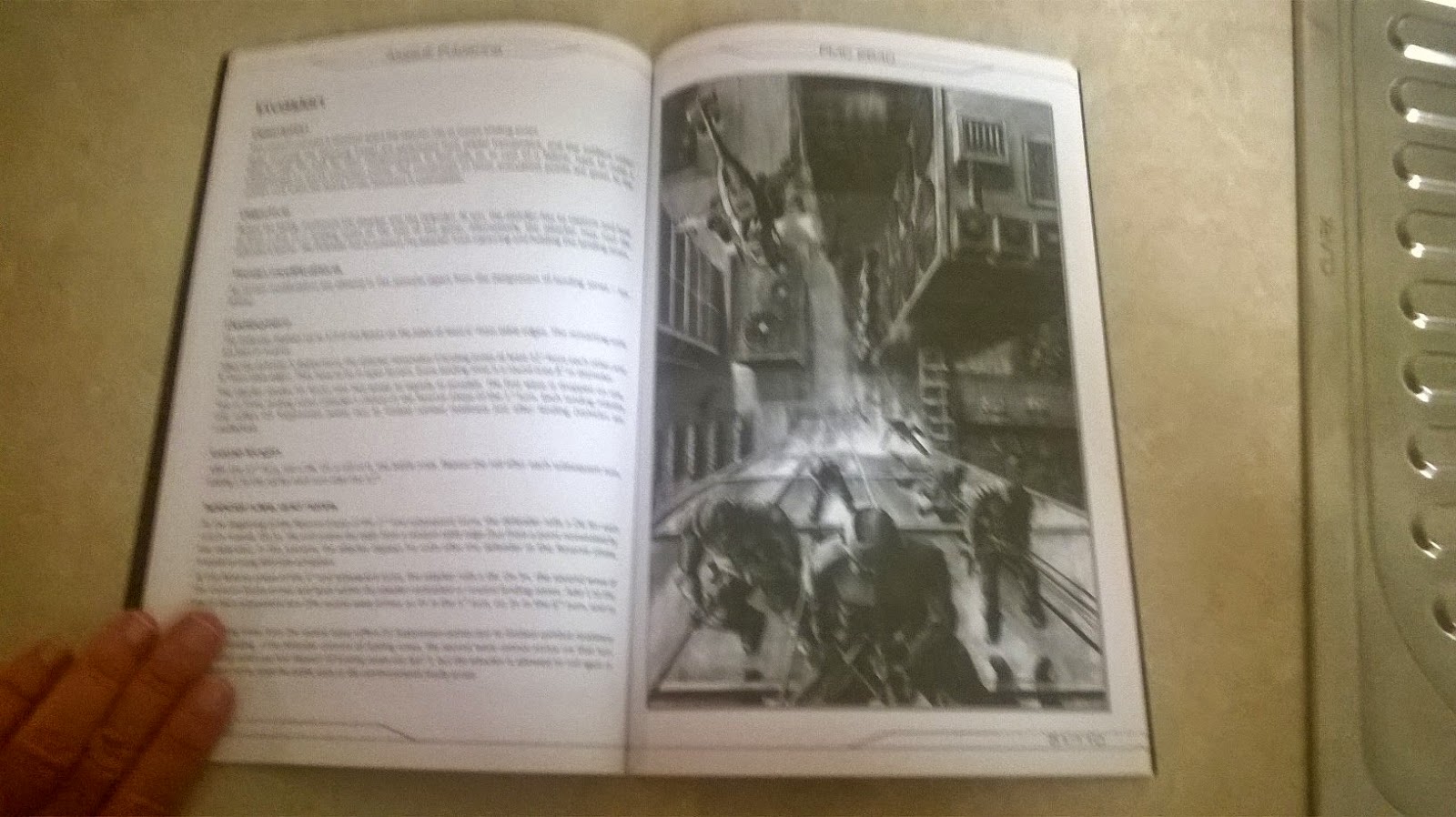 A lot of effort has gone into the background fluff and campaign system.

Unit Creation
Battles have a tier and size – a bit like Heavy Gear – which determines how many units and what types (ranks I to V) are allowed.  There are mission and terrain generators you can roll on, and six missions- ranging from demolition to take and hold.   Units are fixed.  There are no “custom” units like in Gruntz, for example.  I suspect this will be the most contentious point of PMC 2640 for most players.  The lack of a unit creator is a deliberate omission (to prevent min-maxing) - playing a campaign and “gaining” skills is the suggested way to get custom units.

Campaign
PMC 2460 seems designed with campaigns in mind – your merc  company gains skills, money and can increase in size/rank.  Losses can be replaced, and units upgraded.  Destroyed vehicles may be salvaged.  This is very in-depth – far beyond the usual token campaign page in most rules.   A merc company can have strategic doctrines (like extra $$$, better training, better PR), operational doctrines (like air superiority, flexibility in army lists) and tactical doctorines (like better medics, melee, or resilience to suppression).    There are up to 20 battle honours (special abilities) than can be gained – from stealth, determination, extra move speed etc.   Vehicles can be upgraded too.  Units which suffer losses can accumulate trauma (become alcoholics, suicidal, cowards, or become unpromotable.)   There’s a lot to like for the closet RPGer out there.

Solo/Co-op
Again, this is a lot more in depth than the usual list of suggestions.  You roll dice to determine the unit behavior.  This includes two new troop types – space bugs, civilians and insurgents – which are not used in regular games., as well as six co-op solitaire missions.

Recommended?  Yes.  A simple, consistent ruleset designed for campaign and co-op play.  The people who are offput by the lack of a “unit builder” will likely be appeased by the thorough campaign options.  It’s also more appealing to use with vehicles than Tomorrow’s War and is a true platoon+/company level playset.
Posted by evilleMonkeigh at 01:18