Why not dig out all my Steampunk/Wild West minis (or ones that fit the period) and see what I have?
The answer: I had quite a lot.  Pictured is a little under half my collection.  The rest is unpainted. 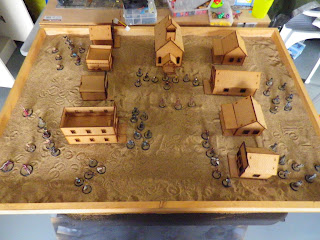 I discovered quite a few models suitable for the Weird West...
(In this pic you can see the downside to using a sand table - the marks made by the bases in the sand)


To Base or not to Base:  Slotta 25mm vs 30mm Lipped Bases
I much prefer the Warmachine-style lipped bases, which both frame the base and mini nicely, and give you a good place to grip the mini when moving it.  But many game systems use the standard 25mm slotta popularized by Games Workshop.

Basically, any "realistic" scaled models which stand 25-28mm.  I'm using Perry historicals and LOTR models together for "gritty" fantasy.  Any models used in historical games which fight in "ranks" are also kept slotta size so they can fit in my War of the Ring movement trays, as well as any modern/sci fi. 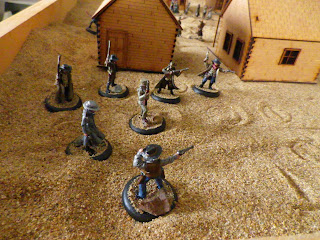 Black Scorpion make my favourite western minis - but good luck getting the heroic 32mm+ models to match up to normal 28mm historicals....

Heroic models which stand 30-32mm+.    This means I have "two" fantasy basing standards, but the chunky Warmachine models were never going to work with LOTR stuff (which is more like 25mm) and fits far better alongside Malifaux heroes or the big Black Scorpion models.   In short, any heroic-scale pulp/fantasy/steampunk minis.

My only concern is that there are some monsters (such as GW demons, or werewolves) which can work in both basing scales.  Anyway, having finally bitten the bullet, I started to rummage through the lead mountain and either paint or rebase old models at an impressive clip. 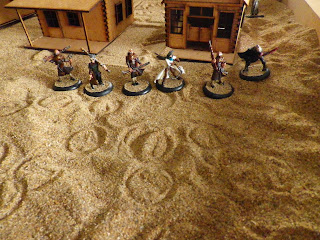 Bonus points if you can identify which models come from which manufacturer.... 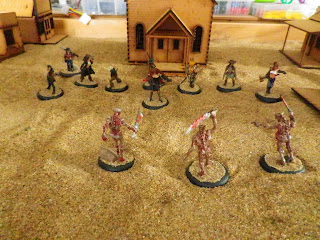 A gang of female gunslingers and swordswomen defend a demon attack on the church.... again, there are models from at least 3 manufacturers in play... 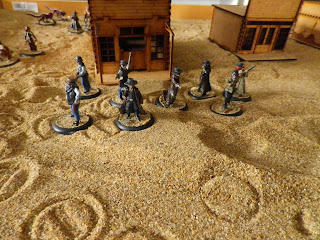 A bunch of townsfolk defend the saloon front.... 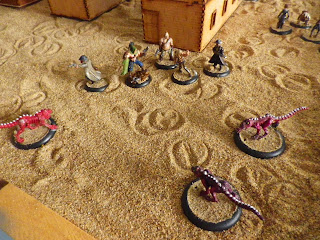 While some lizard-hounds* corner a bunch of roughnecks around the back....
(*are they some sort of OOP Chaos/Dark Elf model?)


If you do a job, do it properly...
... or is half a loaf is better than no bread?
I've been very quickly painting models (barebones basecoat + wash) as well as rebasing old paint-jobs.  My aim is to simply get models out of boxes and blister packs and onto the table.  I'm cringing somewhat at the paint-jobs, but I'm eroding the unpainted lead mountain at an impressive clip - I figure I can go back and highlight/detail/touch up them at a later stage.

This approach neatly encapsulates my philosophy:

2. Paintjobs do not have to be amazing, as long as you "tried" (aka any paintjob is better than none)


I did a post on "naked miniatures" years back, which also has some amusing responses in the comments where someone simultaneously attempted to accuse me of being an elitist paint nazi forcing others to paint at an impossibly high standard (reading comprehension much?) at the same time as claiming bare metal models are better.... 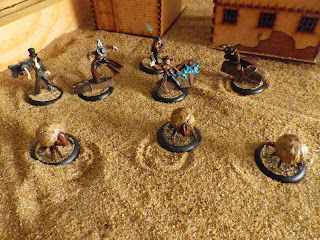 I rather like these creepy "grave ticks" (Heresy Minatures) which are being taken on by the local undertaker and some undead-hunting "Death Marshalls."

Test Your Knowledge:  DilemMa or DilemNa - which is the correct spelling? I always find it interesting how the wrong way feels right, yet there is no dictionary that ever spells it that way.  It's a bit like the use of the words fUrther and fArther. In Australia at least, we always use the former word for both meanings - which are both rather different.
Posted by evilleMonkeigh at 23:04