I normally don't do "retweet" style posts but this looks pretty cool.


Giant flying cathederals in space are back, baby!
Even at $40 the entire game will still be cheaper than a single battleship miniature...
More details here. It seems they're retained the core BFG gameplay.

Space battles - with a campaign system? Shut up and take my money!*

(*Well, after they get it out of Early Access - bloody hell why doesn't anyone release actual complete, tested games anymore?  Silly question I guess - why would you when the world is full of idiots who will pay full price for an incomplete game AND pay for the privilege of being an alpha-test guinea pig. It's as stupid as the "pre-order" thing - give someone your money 6 months in advance for a game which may or may not be good.  Why?  Perhaps they will give you some "exclusive" digital gee-gaw in return for your $70 interest free loan? Perhaps you get to access the official servers 6 hours early? Wowza! Sometimes not even that - people obviously feel compelled to loan money to multi-million dollar companies)

I really like space RTS, but apart from Homeworld most tend to be 4X, which means (a) complex tech tree to memorize and (b) only brief fun sandwiched between the boring "build up" phase where it takes 2 hours to research a rudimentary frigate and the tedious "manage an empire so large it feels more like filing tax returns."  A campaign focussed on the pew-pew gets my vote!

*If you know about how DLC works you may find the comic below amusing.  DLC = downloadable content for a PC or videogame i.e. you pay $$$ for extra maps, missions, characters and weapons in a game.  Often it is stuff that is developed with the main game but actually removed from the game before release so they can sell it to you later.   Lately gaming devs have been selling a "season pass" a $50 collection of DLC that has yet to be released - yet another "interest free loan" for suckers enthusiasts.  Heck, with $80 for a base game and a $50 season pass it makes the old subscription-based pricing look attractive. At least then they had an incentive to make the game work and keep it updated as you could simply unsubscribe....  Now they get your money upfront, and screw you if you don't like the game, content or patches - they have your money and are going to repeat the process on a new game (or rather concept - they sell a trailer/concept rather than a game) in 12 months time..... 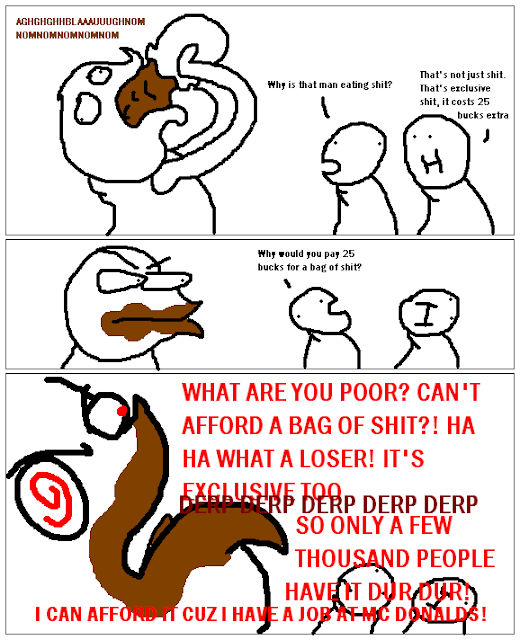 Sadly, this isn't really a joke.  This (slightly paraphrased) is appears on gaming forums all the time whenever someone complains about "exclusive" DLC....
Posted by evilleMonkeigh at 03:23