As I have been "back to work" shed time has decreased but it's still possible to snatch a bit of gaming time indoors after the munchkins are asleep.

The Secret World
My latest game is The Secret World - a MMO about modern pulp.  Templars, Illuminati, and the Order of the Dragon investigating paranormal disturbances, wielding conventional weapons like swords, handguns and assault rifles alongside magic powers to fight Lovecraftian horrors.  Harry Potter joins the CIA, as you will. 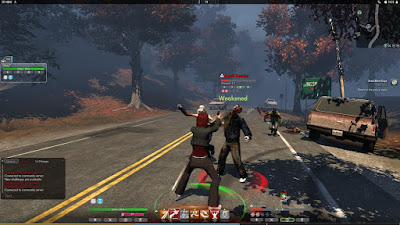 It starts out Walking Dead style....

The game is very much a "MMO" (easy to play - mash an array of buttons to auto-attack, without much hand-eye co ordination required) but pleasingly, can be enjoyed solo without the fruit loops other players that tend to frequent this game genre.  The storytelling is the greatest strength.  For example, the first "mission zone" sees you investigate Innsmouth Kingsmouth, where a lost trawler returns, followed by a strange fog which animates the living dead, and strange Davy Jones-esque fish monsters roam the bay.   Strange Illuminati symbols and runes are inscribed around the town by the founding fathers.  Exploring the uncanny environs of the town has been great fun, and further missions promise adventures in Egypt, Tokyo and Transylvania.   Whilst this MMO genre is not my usual cup of tea, it's genre, style and storytelling have me hooked.   There isn't a huge player base, which is a bonus, as outside the main "mission hubs" you rarely encounter other weirdos players, so it feels more "horror" as you battle your lone way through strange monsters and undead.  In addition, it does not lock you into the usual "classes" - you can unlock and wield every skill and power though you can only equip 2 weapon/magic types at a time.  If you like pulp horror with a Lovecraft vibe, you'll probably enjoy the stories and exploration in the game even if you aren't a gamer (and since it's a MMO catering to the lowest common denominator aiming for mass appeal, gaming "skill" isn't strictly needed). At $10 on Steam, it was a bargain. 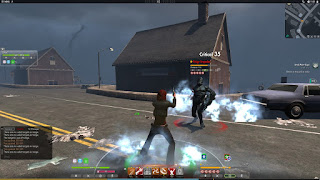 ..and takes a turn for the Lovecraft as we enter Innsmouth "Kingsmouth"

The game has inspired me to fiddle around with my modern pulp homebrew rules (best described as a mashup of the best traits of Infinity and SoBH) as well as looking through my Savage Worlds rulebooks.  The idea of secret societies fighting a secretive arcane "Cold War" whilst hunting down monsters with assault rifles and fireballs inspires my inner geek. 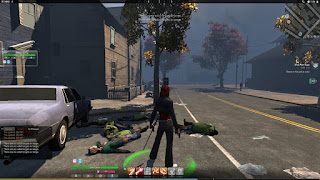 Job well done...   ...my Templar wields gun, blade and blood sorcery....
Homebrew Pulp Magic
My current pulp "magic" system is based on a d10; mages must roll under a d10 to cast the spell.  Failing means they must miss an action next turn to recover and "recharge" their magic (or instantly regain it at the cost of losing their stamina - which acts as a LOTR might point).

The binary nature means balancing should be straightforward - without casting times, or a magic points pool etc - simply increase/decrease the difficulty in 10% increments until "balanced" in popularity/effect against other spells.

At the moment I'm trying to make up a list of generic spells, in the Savage Worlds style - i.e. describe the effect rather than the trappings (i.e. a "disguise" or "charm" spell might work the same as "invisibility" and share the same rules - i.e. enemy must pass a Will test in order to attack) thus minimizing the actual new rules to learn.  My current short list includes:

The rules are nice and generic and can be used to describe a range of effects.  In fact, I want innate abilities to share the same rules as magic i.e. a vampire's ability to leap or fall great distances can be mimicked by a mage's levitate spell; the only difference is the mage must pass a magic test  dice roll, and the vampire automatically can accomplish it (or perhaps tests against his Agility).  Furthermore, technology can also share the rules (i.e. rocket boosters/jet pack or steampunk spring boots can also have the same in-game effect).   I'm gunning for the maximum range of abilities and magic, with the minimum amount of actual special (extra) rules on top of the core mechanics. 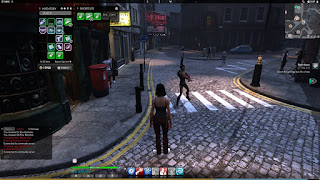 My main issue with massively multiplayer games is they are full of other people.  Spot the human player in the street ahead of me - yeah, the one dancing Gangnam style.... I swear this genre attracts the biggest tossers in online gaming...

Speaking of special rules....
I often harp on about how special rules are over-used under the incorrect assumption they are simpler than stats (i.e. the poster child, SoBH, has only two stats but ~100 special rules; compared to the more conventional LoTR's 5 stats and ~30 special rules, that's actually 3x more things to remember/look up. That's not simpler!)

Anyway, I recently have noticed a few recent rules (such as Deadzone 2.0, and another which I forgot) now switching back to stats - i.e. adding in a movement stat, etc - in order to "...simplify and add differentiation, and remove confusing special rules."   Is the pendulum finally swinging back the other way into the common sense zone?

Below is a quick reminder of why I don't usually play MMOs.  Thankfully the oddballs primarily hangout in the non-mission social hubs where they can show off their dubious taste in monster hunting garb - the missions themselves are pleasantly deserted.... 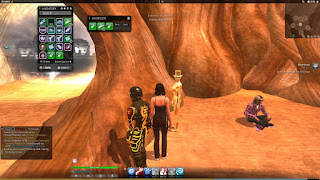 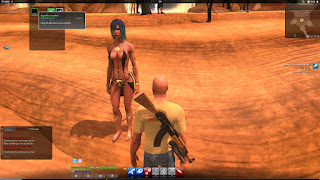