This is a topic on the DV google group that has seen a lot of differing opinions on what makes a good car battle games, in terms of realism, recording, etc.  There's a few pretty nifty ideas as well.  Shoutout to the prolific inventor Eric Farrington who has since published his "flick mechanic" game.

For me, I'm interested in a campaign game allowing 6+ cars per side to be used, with a driving "feel" without aiming for hyper realism.  I'd prefer not to have uber detailed recording or fancy templates - i.e. keep a low barrier to entry - "pick up some Hot Wheels, some dice and play."

Anyway, I stole some of my 1-year-olds more muscle-car-y Hot Wheels (in my defence, he left them scattered messily around in my work shed) and gave them a quick spray with some normal beige gloss spray. A touch of black and metallic grey later, and they are now a blank canvas awaiting some 15mm weapon add-ons.  (I think my Sherman tanks may surrender their pivot mount .50cals... I'm sure there's a Sherman variant that didn't use them anyways...) 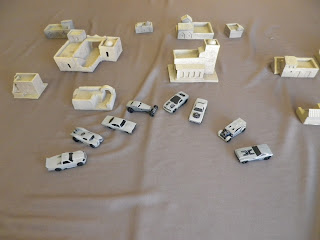 I was supposed to be cleaning my hobby shed; at least I go those pesky Hot Wheels out from underfoot... 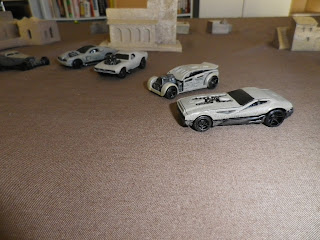 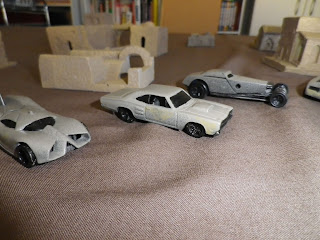 I'll have a dig through my 15mm spares box. Weapons will be added... 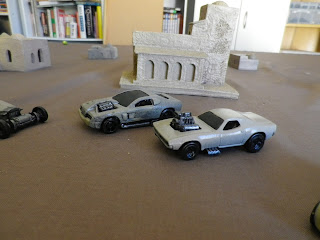 I'm probably going to use a impulse-style of movement (i.e. cars move only 3-4 "CUs" or Carlength Units" per impulse) so they don't teleport past each other or zoom off the table.  Turns might use a 45 or 60d arc, with rolls to skid etc if going to fast for the angle of turn.  Weapon ranges and accuracy will be kept really low to emphasize maneuver.   I'll probably use a d6 hit location system depending on the angle of fire to the car, for example:

Perhaps each car can have a simple card with hit locations on it.  Anyway, I've got a few old draft rules, and I'll dig them out over the next few days and have a playtest....
Posted by evilleMonkeigh at 21:40