I finally embarked on the Rohirrim - I've been put off by the size of the job - 20 or so cavalry and 80+ infantry. Veteran Napoleonics or Warhammer Fantasy players may scoff at me, but as a longtime skirmish player I tend to be paralyzed by significant quantities of minis. I mean, my LOTR minis have languished for 10 years, as I stupidly bought big used boxes off ebay and got all the factions. Meanwhile, I casually collected Warmachine in small quanities on an ad hoc basis, and they are always painted up to date. Note to self: always buy minis in small quantities. Yeah, right.

Sadly my suspicions I would not paint the white shields well were correct. They are acceptable at tabletop range I suppose. Another box set of 24 rank-and-file ticked off. 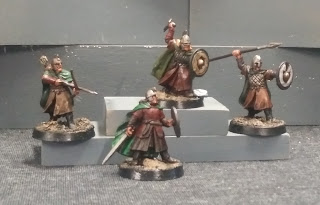 A more fun job was 24 Corsairs of Umbar.  I went with the GW-style blue-and-purple scheme rather than the movie browns-and-blacks - I've painted enough LOTR minis in drab realistic hues, thank you very much.

Annoyingly they ended up more blue than purple - I kinda wanted more of a dark purple vibe. While they are aggressively highlighted and won't win any awards, they 'pop' pretty well on the tabletop. 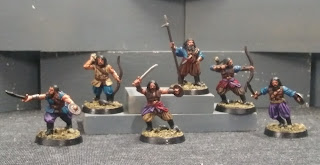 I'd like to improve on the very basic basing for both, but am awaiting better flocking etc for the Rohirrim. I think I was in a rush to complete them by the end of January so I could surpass '200+ in a month' barrier - the 48 minis brings my monthly painted total to a whopping 230.

As usual my 8-y/o daughter arrived and took an interest. She asked me to include her photos - here are her poses of choice:

Evil or not, she prefers the prettier corsairs. We're finishing Two Towers together and she likes investigating the minis to try to tease spoilers out of me. 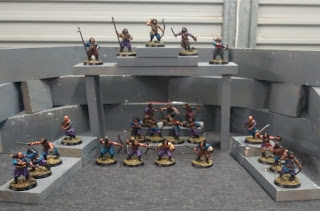 I continue to rather listlessly (but productively) paint. I've been thinking about a few other game design topics - (a) how can we make deployment (setting out minis) less of a chore and more an integral part of the game tactics - inspired by ideas from PC's Steel Division 2 (b) how could we introduce respawning into a game (I think Privateer Press' new sci-fi game does this) and (c) could we have terrain that is able to be manipulated once the game is under way in a simple way (obviously from a cyberpunk/sci fi/fantasy angle).

The unpainted LOTR pile of shame is shrinking rapidly. I'm going to make a start on the Easterlings and Haradrim so I can say I have models from every faction done, then I'll circle back to those bloody Rohirrim horses.