LOTR: SBG - Fellowship of the Ring

These models were a blast from the past - some of the first GW models I painted - 20 years ago! I repainted some, tidied others and gave them my basic quick base - pva + sand + cheap brown craft paint + drybrush of choice.

I mostly have a random assortment of heroes and characters  as I bought my LoTR models in 'job lots' but I have multiples of various Fellowship. This is a complete original plastic set. 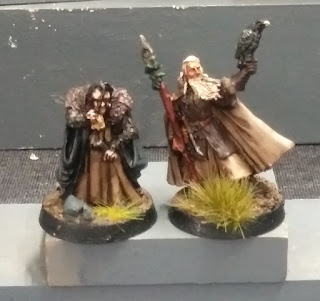 I also found a Grima Wormtongue and a 'proper' Radgast the Brown when ferreting through my 'heroes' tub. You know, not the birdshit-smeared abomination from the Hobbit movies, themselves three giant turds which I like to pretend never occurred.

So you spend millions for the rights to a beloved book with a built-in fanbase, then change it completely, with brand new antagonists and characters. I mean, what were they thinking?

"Lets add in a character, Radgast the Brown . He's a powerful wizard like Gandalf and Saruman, only interested in nature."

"Cool, cool - how do you envision him fitting in?"

"He's not actually in the Hobbit though."

"Even better! We can show how much clever than Tolkien we studio writers are!"

"We'll give him an irrelevant role to pad out the movie, but - get this - we can have him ride a sled pulled by rabbits!"

"Hilarious - OK do it - you're a creative genius!"

It can only be arrogance. Studio writers who think they can do better than a famous, beloved author. Although in the case of Eragon, that wouldn't be hard. I quit after the second chapter as the author didn't actually know what half the words meant, was a master of 'tell don't show' and had more logic gaps than in filler episodes of TV series.

Obviously, you need to change some things when you transfer a book to another medium. But wholesale changes and needless additions to key plot points, motives and characters kinda make it a different story entirely. At which point you wonder why they bothered buy the film rights? Has no one noticed that the shows that follow books more closely seem to be the most well liked (Harry Potter, LoTR, first seasons of GoT).

I'm pretty sure a train wreck awaits Amazon's Lord of the Rings, Ring of Power (<- even the title is stupid: like Game of Thrones: The Throne) and it's likely range of heroic hobbits of various ethnicity and gender identities.You know, the hobbits who weren't even relevant in the Second Age. Jordan isn't an amazing author but Amazon managed to screw up Wheel of Time spectacularly. Heck, unlike GoT they had all the books! Change for the sake of change isn't a good rationale, especially when you have scriptwriters of such cringeworthy standard. Heck, even if it was just a fantasy show which shared the same character names it would be bad.   /rant 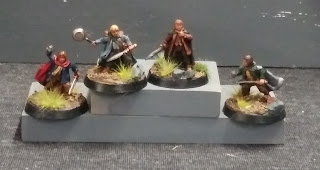 The Hobbits keep their original 20-y/o paint, merely touched up a bit. 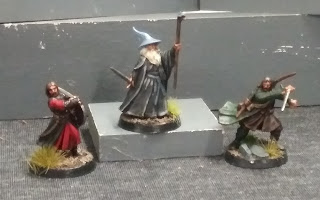 Gandalf, Boromir and Aragon got new paint jobs as they didn't align with the movies. Somehow I had Aragon in a red outfit? Note to self: highlighting is too bold and aggressive - as I've been doing the 'wash last' technique like I do for 15mm - this is by going aggressively lighter with contrasting base colours, than washing at the end to mute/blend. This means you can skip some highlighting - fine for rank and file but probably not a good idea for main characters. Oh well, I'll dig out some metal versions later and do them more carefully then. 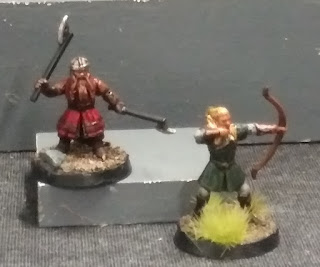 Gimli got a new paint job while Legolas only got a touch-up. Also note to self - learn photography as blurry phone photos are tiresome.

I think my model count for 2022 stands at 182. I think I've even based the last of my LoTR models (admittedly, about 80 of them) so I feel the end is in sight. Being tired and sick is super productive on the painting front. I'm too tired to care much about fussy detail, and I'm too sick to concentrate on more complex high-effort work and hobbies. Painting is like colouring-in for dads!