I'm exploring modern/near future combat at the moment, as part of making my own homebrew rules and also in hopes I'll find something good so I don't HAVE to make my own rules.

Sadly, Skirmish Sangin isn't what I'm looking for. For a start, it's not a wargame.

It's a 169-page PDF, pretty well designed and printer friendly.  They make it clear their focus is on narrative skirmishes (so far so good) with a bit of background on Afghanistan. There are lots of lovely photos of minis and it is easy to read. There is also a detailed index for finding things. The time and ground scale is clear (3" is ~6m). I found the squad weapon loadouts etc quite useful; there is info for British, NZ, FFL, SBS, SAS, US as well as insurgent forces etc. There are plenty of quick reference sheets. The rules are sensibly laid out. 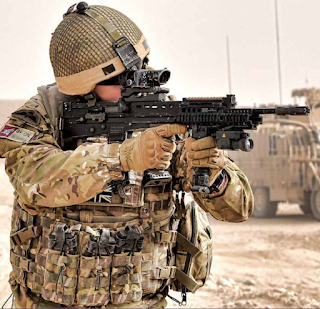 Overhead - aka What You Need to Play

D6s? Easy. But two d10s for d100 (%) sounds a bit ominous and gives me RPG vibes. Eek! Rifles do 2d10 damage. And there are rolls like 1d10+4.  This is clunky and over complex - I don't even like this in a RPG. Not only are there several dice resolution mechanics, but they aren't easy to remember if they vary from weapon to weapon. It's made for 6-10 soldiers per side, which frankly is looking overly optimistic.

The above paragraph should tell you everything you need to know about how gluggy, convoluted, old school, and RPG-ish this game is. Creating as force is about as laborious as setting up a D&D party.

This is one member of your 10-man squad.

Yes, the players use action points (yay the 90s) and their "Body" stat determines in which of the 10 combat phrases they activate - basically you go down your forces from highest to lowest BODY (representing agility etc) checking who can activate. Models can use 3AP in each phase they are active, to do the usual walk, climb a high obstacle, climb a low obstacle, climb through a window, stand up from prone, kneel - you get the idea, it's pretty detailed.

On the upside, the action is broken into small segments and I kinda like the 'SFB impulse' idea.

Models must spot enemies in their 180 front arc - this is 100% but can be reduced by cover, visibility conditions, and increased by target movement etc. There's a lot to keep track of. There are 37(!) spotting modifiers. That must be a modifier record out of all the rules I've ever owned.

The dedication to modifiers and charts is impressive. Possibly a record?
Especially since spotting is something you do relatively often...

Shooting also has plenty of modifiers but a mere 27 this time. These are a % change i.e. a solider may have a 45% chance to hit, but +/- various 10% increments. Surprisingly, weapons are lumped together by type i.e. SMG, assault rifle, sniper rifle, LMG and there's no DMR or differentiation by calibre. Given the level of detail, I was expecting weapons to be all different i.e. M4 having different stats to a M16. Units can 'snap fire' out of sequence with -30% shooting and forfeit their next activation.

When hit models can make armour rolls (1d10+4 etc) to block incoming damage. Damage that exceeds this has effects on the wound chart.  Of course each model also has 12 hitpoints. Hitpoints, bah. Models can also fall unconscious.

The wound table is predictably detailed, e.g. seriously wounded models -20% off morale of allies in 12" due to their screaming, among 6 other effects of being seriously wounded. Of course, you can also have a light, medium, or critical wound with their own accompanying effects.

There are predictably detailed rules for grenades, smoke launchers, etc. In hand to hand combat sides take turns hitting each other (meh) but can use special multiple-AP maneuvers to modify to hit/damage, like feinting, circling, all out attack etc (cool). I like variety in melee, allowing some decisions not just shoving models together and rolling dice (I think this is food for a game design article).

There are lots of % morale tests, with the game recommending stacking counters for each 10% morale penalty. Agh, just please - no. Well, there are only 13 modifiers this time, so perhaps I shouldn't complain...

There are rules for heavy and vehicle weapons, vehicle combat and indirect fire but I'm not going to waste time describing them as by now you should know if this is sort of game you'll love or loathe. I suppose there is an audience for clunky convoluted pseudo RPGs*...

*There is even a whole page of "fumbles" and "criticals" - if you ever roll a 01 or 00 on your % dice. There are penetration charts taking up a whole page. There are literally hundreds of modifiers for various actions. (Yes, vehicles get their own tables and modifiers). Ironically, a dedicated RPG like Savage Worlds has smoother, more consistent gameplay and combat. 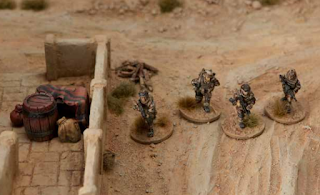 The PDF has lovely art and is one of the best laid out PDFs I've owned.

While well presented in a good PDF, Skirmish Sangin is a clunky 1990s RPG dressed up as a modern narrative skirmish game. If you love convoluted rules, charts and think game design peaked in the 1990s with WRG and you think D&D has fluid combat, you may love this. There are literally a hundred modifiers, charts galore, many different dice mechanics, and plenty of opportunity to clutter the table with tokens. If you can imagine it, there is probably a detailed rule explaining exactly how you can do it. However, I found it was odd that along with such excessive detail things like DMRs were absent and it didn't differentiate between 5.56 and 7.62mm rifles.  I liked the melee options and thought the activation method was interesting but Skirmish Sangin is not my style. But if you enjoy lots of dice rolling and looking up charts and modifiers over actually playing a game, you'll love this.

While not an exhaustive list, these are some other modern warfare options I've tried lately:

Ambush Alley is Stargrunt remastered and while good is actually slower/gluggier than it seems. Osprey.

Spectre is a solid generic toolkit but I've only played the alpha rules due to the $50(!) P&P.

Killwager is very innovative and Infinity-esque but terribly explained, overpriced and incomplete.

Infinity: Code One is free and is a simple version of the excellent but complex sci fi Infinity rules.

Out of these, Infinity and Ambush Alley I've played the most, and Spectre is what I'd probably recommend to a player new to moderns or wargaming.