To get back in the blogging rhythm I have decided to follow up a game design post with a rules review. I'm also trying to justify the Osprey books I already own (given I have just ordered... ...a few..  ...Gamma Wolves, Reality's Edge, Dracula's America, A Billion Suns, Zona Alfa. I hope my wife doesn't read this... I'm also eyeing Outremer but as I'm only interested in the campaign mechanics - I don't own any crusader models - I haven't justified it to myself. Yet.)

Anyway, on to the review. It's been a while since I playtested it so I'll be going from memory here. 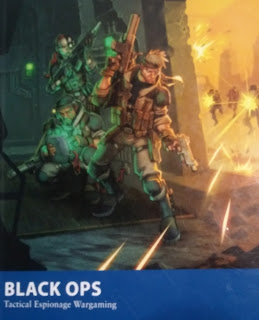 It's an Osprey Blue Book. Not a lot to add to that.

It's an Osprey Blue Book which will be instantly recognisable to anyone who owns one. 64 pages, mix of Osprey art and pictures of minis. I thought the art choices were rather good, and it was easy to read.  I also like the "foreword" - he set his design goal (fast play, covert ops with attacker/defender, use cards but not require special card or dice) and be able to play moves/games (Black Hawk Down /Zero Dark Thirty to Metal Gear Solid) - and acknowledged his influences (40K + cards of Too Fat Lardies/Studio Tomahawk) which certainly are obvious through the rules.

Models are classed as Aces (leaders); Kings (heavies); Queens (specialists); Jacks (grunts) and Deuces (Civilians) - the name corresponds to their activating card - more on this later. There are about 40 universal "special rules" but they are simple and self-explanatory (stealth, airstrike, silencer). It's a reasonable mix of stats and special rules and makes sense. No complaints.

Players each need playing cards A,K,Q,J,2 - one player has 2 the red suit and 2 has the black suits. The cards are shuffled and pulled randomly. When a card is pulled, all models of the type corresponding to the card perform one action or go on overwatch where they can interrupt enemy actions. It's a bit weird models activate by 'type' rather than by 'fire team' - i.e. all heavy weapons troops act at the same time, regardless of the squad they are attached to. Activation is a bit random (too random?) but I supposed it is representing the chaos of a firefight. It just feels a bit "off" in how models act by type/loadout rather than in fireteams. 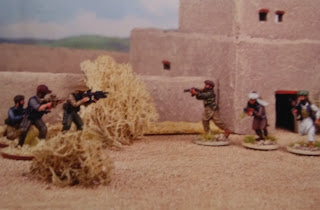 Lots of nice miniature photos throughout...

I quite like the hold/cautious move/advance/run "stances" which impact speed, stealth and weapon accuracy. Basically the slower you go, the more accurately you shoot and the more easily you hide. There are rules for climbing etc as you would expect from a skirmish game. Good.

Models have a restricted vision arc (front/flank/rear) which makes facing important and adds more tactics.  In stealth games, targets must be identified and hidden targets can only be suppressed. There are simple shooting modifiers (for range, movement, visibility etc) and single 'aimed' shots can be taken. Suppression is quite important - you can pin enemies and force them to retreat; and it's easier to pin than to shoot to kill and is useful for area denial.

While shooting made sense, close combat (melee) was a little odd - it had an opposed roll but required a chart; and ties were determined by weapon length and location. While not complex, it was more involved than it needed to be.

Oh - while the combat mechanics are relatively simple, the 'roll lows are good, negative modifiers are good' is kinda the opposite of most wargames and feels a bit weird.

Each model rolled a typical "save" when hit, modified for armour, cover etc, with unsaved hits removing the model from the game. Morale (dedication) is better with friends or when in cover, and forces may waver or break when they have too many loses or Aces (leaders) are out of action.

There is a range of modern weapons and a few exotic/near future ones (crossbow, laser, railguns) but the primary focus is observation and stealth missions. There are "blinds" - tokens that represent unknown forces - used in conjunction with the playing card activation deck. Models can choose to be hidden, or roll to "spot" and reveal blinds (i.e. discover what the enemy really is and have them placed on the table.)  There is a big focus on stealth and stealth missions. There are rules for civilians and neutrals who can get caught in the fighting - perhaps helping the attackers or alerting guards.

There are vehicle rules (which I didn't test) which appear serviceable; but the focus is obviously not on vehicles and I doubt you'd use more than 1-2 in a mission.

There are "army lists" aka factions - some with sub-factions: for militia (conscripts, organised crime); professionals (regulars and police); special forces, mercenaries, ninja(!), fanatics, and intelligence services like secret police.

Feels like a mix of Kill Team with a dash of Too Fat Lardies blinds.

Scenarios - It's all About Stealth

Stealth missions are what Black Ops is all about. There's rules for guards and attackers. The stealth is both a strength and a weakness. The defender doesn't have a lot to do until the attacker triggers guard reactions by generating "Noise Counters" by doing suspicious stuff like shooting, running etc. This is stealth focus is bad if you are playing with a friend. The defender is going to be bored.  This is good if you are playing solo - the largely automated guard (and civilian) reactions. It reminds me strongly of old 40K Kill Team missions I played years ago. There are typical assassination, extraction, sabotage, raid, and surveillance missions which isn't a huge variety but admittedly covers 90% of real life spec ops missions.  Campaign mechanics are pretty much non-existent.

The stealth focus is double-edged. 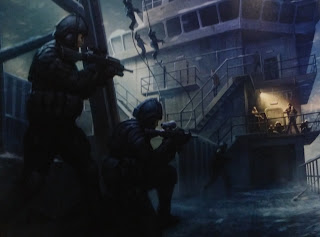 Stealth is the focus; the clear attacker/defender makes it good for solo play but boring as a defender

It certainly reminds me of Kill Team mixed with TFL card activation. The card activation based on types seemed both odd (and perhaps too random; while I approve of the intent I'm not sure I liked it in practice). Also odd was the "low roll is good."

The stealth focus is both good (if you are solo or co-op, as you can almost automate the defenders) and bad (if you want to play against a friend - being the defender will suck). I'm considering it for play with my kids (i.e. they could team up against a benevolent dad-who-casually-controls-the-guards) and the mechanics are certainly simple and fast play as advertised. There's no campaign element - which often helps sell a skirmish game to the crowd this game presumably targets.

Recommended?: I'm on the fence. I approve of the intent and I think the designer met his goals, but I feel I could pretty much stick old Kill Team stealth rules onto any rules I have and get a similar effect.