I've had these for a while, bought during a major Warlord (Chrismas?) sale. I love reading about WW2 MTB combat; indeed my space and sub rules always have a MTB "flavour" - slow-and-sneaky which can change to loud-fast-pew pew. I'm not super motivated to finish painting my minis or play more - the rules are straightforward but merely "meh."  But their worst crime (beside some weird omissions) is that they don't actually emulate MTB combat very well.

It's a 107-page softcover of which the basic rules only take up 12 pages, with about 50 extra advanced rules. There are plenty of diagrams and models of ships - it's a nice book, and actually a pretty easy read, laid out logically with key info at the front and background fluff at the back, along with quick reference rules (why don't rules designers do this any more?). It's well laid out. 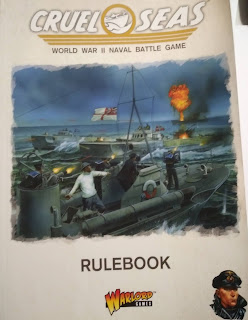 Overhead (what you need to play)

A starter set (with 10 lovely 1:300 boats, card terrain etc) is about $100AUD. For activation you need a d6 every unit. D10 are also used for firing. There are wake markers and ship data sheets that come with official Warlord models, but the rules have ship stats so you could make your own, which is nice. A ruler with turn markers was included. I supplemented my starter box with some extra boxes at $40AUD each. If two players split this, it would be quite affordable. A blue sheet makes a good ocean and islands (painted rubber islands cut from black flooring) were easy. It's actually pretty easy to set up. There's quite a lot of hitpoints to track and weapons to fire for each boat - it's a bit clunky but not complicated at all. This is a pretty accessible rules set and I felt it was reasonable affordable for what you got.

It uses the self-proclaimed "innovative and award winning" activation from Bolt Action. Which is just pulling dice out of a bag. When it's your colour dice, you activate a boat and do all your moving and shooting.  Basically bigger fleets have more opportunities to co-ordinate regardless of crew skill (i.e. kinda the opposite you would expect). See my post on unfair activation for more on this. It's not bad, but it's certainly not innovative nor particularly good. 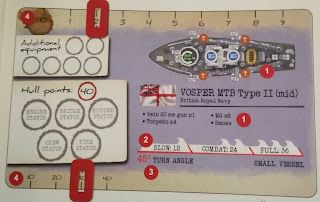 Boats move at a cm per knot, and can choose fractions (i.e. slow, full, combat) of the top speed. They can change speed by one level each time they activate. Wake markers are placed behind ships and denote speed in a simple way. The ability to pivot turn stationary is a bit weird especially as it seems to apply to bigger ships; also from my reading it seems a slow 15kt freighter at full speed would turn sharper than a 30kt MTB at half speed.

I was startled there was no proper stealth/detection mechanics. As MTB combat revolved around this, it's a pretty startling omission.  Accounts of MTB battles revolved around stealth, detection, and surprise. While there are rules for spotlights and starshells, they are more a "to hit" bonus that detection.

This is a huge issue if you are seeking a realistic feel - things like weapon ranges are almost irrelevant at most WW2 night combat ranges, where sneaking in slowly on silenced engines was the main attack method. Often MTBs did diversions - with one boat firing and throwing up a visible wake with roaring engines while the others quietly moved to attack. Fights were chaotic and often in small-arms (and grenade!) range; with accidental ramming common. Enemies could be decoyed with smoke floats (flares) and friendly fire was common.

I'd suggest something like Dropfleet Commander; each ship has a "detection radius" beyond which it cannot be fired upon. I.e. a MTB might only be able to be fired on from 20cm away when running silent. This then expands by +15cm if the MTB goes over 15kts, and another +15cm if it fires its guns. No dice rolls needed. So the more noisy a ship is, the further away it can be spotted and engaged.

Anyway, in Cruel Seas, ships can fire at any 1/3rd of their turn, and many have quite a few weapons each with their own dice and arcs of fire.  Weapons fire 40-70cm set against the average 30-40cm move, and a 5 or less is needed on d10 (modified for crew, speed, target size etc).  Personally, I'd have amalgamated all rapid fire weapons (HMG, cannon) into a "firepower" stat and done a single roll; as most MTBs have 4 or so weapon mounts. Torpedoes are physical markers that travel 40cm/turn in a line across the board (like Battlefleet Gothic) and roll to hit (based on size) if they intercept any part of any vessel.   I couldn't find rules for reloading torpedoes despite the fact S-boots could.

Damage is done by d6s - a 20mm might have 3D6 and a 6-pdr 5D6. The total score is the hitpoints done, which is recorded on a slider on the target's data chart. I'm not a fan of hitpoints, but they are pretty standard in naval games so I was expecting them. They are pretty excessive though - 45(!) for a normal S-Boot.  I still reckon they could even have streamlined it into "status" levels like "temporarily shocked/light damage/heavy damage/crippled/sunk." Critical damage (to engines, bridge, rudder, guns etc) can occur when '6's are thrown.  But it seems like a destroyer could have its guns knocked out by MGs. 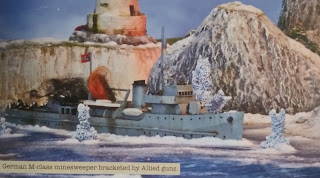 Scenarios and Other Stuff

There are 12 scenarios in the base and advanced rules. The "advanced rules" for experienced crew, multibarrel weapons, crits and repairs  should probably be the base rules. I'm not sure how much effect shell splashes had in real life - I can't recall it being mentioned much in books I've read - the boats would probably outpace them and they would probably obscure a target, not make it easier to hit.

Separating extra rules for crossing wakes, collision and ramming, radar, depth charges, mines and smokescreens is fair as they would not happen often or for specific scenarios. There are also rules for weather, terrain like shoals, sandbanks etc. Exotic weapons like Linse boats, mortars, rockets and zigzag torpedoes are also included.

Aircraft played a large role in WW2 coastal warfare (restricting small craft to mostly night ops) and while fast and powerful, are restricted to a single attack run unless veteran pilots. There is even chance they will misidentify and attack their own ships! (I couldn't find strafing rules? only bombs and torpedoes - which is weird if it is an omission)

Some minimalist submarines are also included (including minisubs) but are mostly used for specific missions or scenarios. 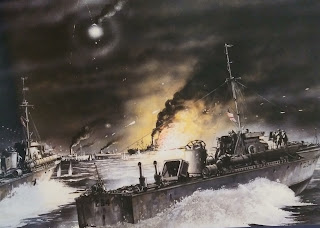 There's a short history of MTBs (in each of the theatres of war) and a section on the ships and models of each of the key navies. The authors enthusiasm for their topic shines through but by putting this towards the back of the book (unlike many authors who lead with "background" in their rules) it does not get in the way of easily looking up rules - something all rules writers should take note of. I'd suggest there are too many big ships (destroyers, frigates etc) listed at the expense of lacking enough actual MTBs/MGBs; nor was there enough weapon loadouts which varied widely from boat to boat, and year to year.

If you don't use the Warlord minis (and their ship cards) you can make your own using the ship rosters at the back of the book, which is nice. You can also add special abilities in a campaign but this is extremely cursory (just a single ability chart and a weather chart) which I found very disappointing. 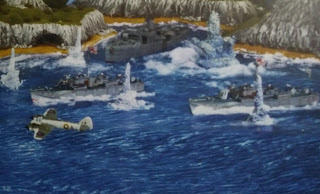 A pretty easy system to get into and a nicely laid out set of rules with cool fluff, it has pretty simple (but not innovative!) activation and movement, using familiar d6/d10 mechanics.  Although it is easy to read (and would probably be a OK intro if you are new to the era/genre), there are a lot of vague grey areas or omissions. For a professional set of rules, it seemed like it needed more testing/checking. The style is there but substance is lacking.

I feel the combat resolution (while simple) is the weakest area; it is a bit clunky where you might be firing several weapon mounts, and the excessive hitpoints could be streamlined. The historical fluff is done well and it's nice to see a quick reference chart included for once. The campaign system is almost nonexistent and a missed opportunity.

However, despite the authors obvious love of the topic, I don't think the rules are very "historical" (well, at least from my readings of books like The Narrow Seas). There are some odd choices/flaws and omissions even on casual perusal and the lack of proper detection rules is a huge mis-step in a genre that should focus on it.

Recommended? Meh. I won't be playing them - while I like the models, I'll use either "Schnell Rules for Schnellboote" or my own house rules. It's OK as a game I guess - Cruel Seas is fine for pushing model boats around and pew pewing, but fails to give me the feel of WW2 coastal combat I seek.

NOTE: Holidays are over, so blogging will probably be sporadic henceforth (though hopefully without year-long gaps!)