This is an awesome concept. Grab some Hot Wheels, create "Death Race/Mad Max/Carmageddon"  - I've experimented a bit in the past with house rules and my unlucky son's cars - using a Star Fleet Battles-style impulse mechanic (i.e. each "turn" is broken up into very small movements of only a few "carlengths" - I used 4cm increments to avoid using rulers which seemed clever at the time - but wasn't).

Interestingly, Gaslands sort of does this, mixed with X-Wing style maneuvers.  I have to give Gaslands credit - it has inspired more scratchbuilding (and even a school project) with less actual playing than any game I own.  Heck it even inspired me to finally pull the trigger on a 3D printer. Whether that is a plus or minus is up to you... 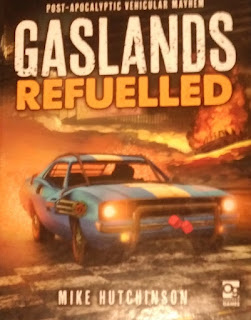 It's one of Osprey's "proper" hardbacks and has lots of inspiring art and pictures of modded toy cars.  I think it was expanded to its current 178 pages from a 64-page Osprey "blue book" so it is easy to read and comfortably laid out. I found it easy to use and navigate though I'm wary its binding will last. It has quick reference rules and a clear index to navigate with. There are ~20 pages of rules, ~20 pages of additional rules, ~20 of advanced rules, and the rest was campaigns/points lists/customisation/scenarios etc. The rules also have plenty of examples of play (which are needed). Except for concerns over its long-term durability on the table (the binding seems tenuous), it's a good rulebook. 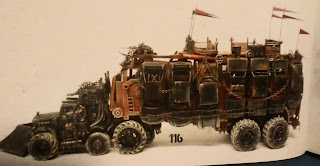 Overhead (aka what do you need to play)

Cars are cheap and easy to mod - but the accessories (ram bars, guns etc) were astonishingly GW-bitz-style pricey. I mean, it's $20 for 10 cars, but could be $80 for specialist bits to equip them...  However I and my schoolkids did OK finding random stuff from the hardware store (rocket pods from plastic screw sheaths were popular).

However the scratch-building aspect is addictive. There's a surprisingly large "scene" for just detailing and modding Hotwheels and bucketloads of video tutorials etc out there.

With regards to the rules overhead - I did not find the whole activation/movement system very intuitive. I was not the only one. I looked up some "how to play" Youtube videos and THEY were often wrong! I found the rules quite obtuse for what screams out as a quick "pick up and play casually with mates." The templates were also a pain and for f--ks sake why the custom dice?  It seems like more the thing FFG would do than an indie rule developer. Making your own dice (or ordering them online) is just another barrier to play, given you already need to make or buy move templates.  There's also quite a lot of tokens and tracking (thankfully off-table) so you can't handle many cars at a time.

It's weird. On one hand, the scratch-building can be wildly cheap and accessible; but it can get expensive if you are a perfectionist and want bespoke parts. The rules themselves seem aimed for club games (or a class of kids/bunch of mates) with a few cars each; but were a bit gluggy and unintuitive for newer gamers. Making (or buying) custom dice and move templates may also be offputting for some. 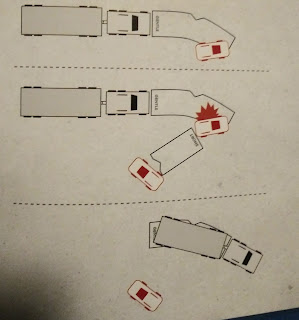 Basically it's got a feel similar to X-Wing, with move templates. A turn is broken into 6 "sub-turns" - a car in 6th gear can act in all 6 stages (like SFB "impulses") and a car in 3rd gear can act in 3 out of the 6 sub-turns.  Your car begins in a gear - aka speed - (shown by a d6) and can choose from a range of maneuvers appropriate for the speed.  Depending on the maneuver, the player rolls Skid Dice, may shift up or down gear (speed), or add Hazard Tokens. The car may slide and test for collision. This is quite involved and I suggest you watch a Youtube video rather than have me attempt to describe it in detail.  I do like the "you touch it you use it" rule which means you can't be too "gamey" in choosing the perfect move - if you pick up a move template, you commit to using it.

Movement gives a decent car combat feel but is not naturally fast to grasp and did not translate well for teenagers. Many youtubers even had issues playing it the way it was supposed to be played. It's the core "guts" of the game (combat is very simple and vanilla), but isn't necessarily simple or smooth if you don't have others to teach you.  This is the part of the game that will "make or break" it for you.

This is much more straightforward. You use the straight move templates and some burst templates you make yourself for ranges, and roll dice with 4+s hitting and 6s being crits a la Full Thrust. The target can evade using dice = to their gear - i.e. a car in 4th could roll 4 dice - with '6's cancelling out hits. I normally hate hitpoints but compared to everything else, this is the least of my concerns.

Cars which collect hazard tokens from wild maneuvers can "wipeout"  and flip/roll; likewise cars losing all hitpoints can be wrecked - skidding to a halt, and perhaps colliding with cars or exploding. There are plenty of rules for collisions, and ramming - it's quite cinematic.

All in all, combat is very simple albeit involving some recording. 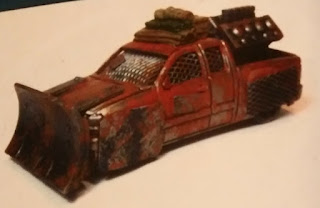 There are plenty of "teams" to choose from which cover most cinema/game archetypes. You can have a lot of fun building your team - both in theory and physically. Everyone agreed this was cool, and students easily grasped how it worked. There are also free online tools to assist this. Vehicles are divided into types - buggies, sports cars, monster trucks, trucks, enormous war rigs etc - you can find a slot for any car in your collection.  There are plenty of weapons - from crew fired nets, moltovs and shotguns to dropped mines and oil slicks, as well as the expected vehicle-mounted rockets, machine guns, harpoons, etc. Want a catapult that shoots car bodies? Gaslands has you covered.

Gaslands is cast as a televised Death Race sport, so you can get audience votes from having your vehicles wrecked - allowing you bonus gear changes, reloads, and buffs/debuffs to assist the underdog.

The sponsors are the team themes - like Necromunda gangs - and include Japanese precision drivers, US militia-with-heavier vehicles, hot rod cultists, ferals with spikey cars, condemmed prisoners, road pirates, and Judge-Dredd highway patrol among ghost cars and bootleggers.  Each sponsor can allow special rules and perks - so a team with "Built" perks could access skills to improve ramming, flips and rolls and crush effects - "Military" perks access skills for accuracy, rate of fire, better critical hits. There are 11 skill "sets" each with 6 subskills.

There is a scenario generator for televiewed events and wasteland skirmishes; scenarios include their own rules and winning conditions - death races, capture the flag, express delivery, salvage missions - there are 17 missions which is quite impressive. There are also rules for a narrative campaign of a team that defends it customisable war rig base against raiders while en-route to an event.

There are campaign rules for TV "seasons" where audience votes help weaker teams, there are championship points (VP) awarded for various actions, "cans" aka cash for upgrades/new cars, and wrecked cars get an "injury table" - they get "Dents" which may cause it to lose perks or upgrades, or crew etc - or be a total write off with dead crew.  Interestingly, a player can cancel out "dents" for other perks - called "Injuries".  Injuries have their own effects - i.e. a "Deathwish" injury means the car cannot shift (slow) down.

The whole campaign section seems well done, and there is great customisation and team-building options. I've certainly had more fun theory-crafting and building teams and kitbashing cars than actually playing! 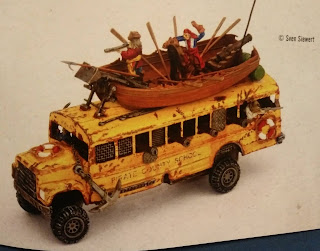 It reminds me of a FFG-style commercial game made by Osprey. It is at once appealingly accessible - and not. Creating your own cars out of cheap kitbashed Hot Wheels, with Necromunda-esque teams and campaigns are very appealing... ....It seems easy to jump aboard. However the custom dice and templates, and unintuitive activation and movement seem counter to being a "quick pick up and play" demo game to play with mates. It would be fine if you are playing in a club of veteran wargamers, but I suspect those folk have already tried Gaslands and are not reading this review.

Recommended? On the fence. Despite barely playing it, I've had lots of fun making kitbashed cars and theorycrafted teams and I am happy with my purchase. It would be a fun game if you had a group of experienced gamers each controlling a car or two each. However it's not for everyone, and is less accessible than it appears - definitely check out gameplay videos before playing to see what is involved.  Gaslands is kinda like a visit to the cinemas where the trailer does not match the movie - but it could be good or bad depending on the viewer.

However, whether you get the rules or not, customising Hot Wheels is great fun and 100% recommended!