A Return to the Man Cave

It's been almost a year since I updated the blog, which I do apologise for. No, I am not dead....  ...but I had reasons (excuses?)

- My computer (with all my current rules/projects) exploding with a pop and subsequently being unable to find my backup drive; sapping my morale

- My kids focus on cardgames and boardgames (Catan, Pandemic, Risk etc) and videogames which are a lot easier to get going in an evening after work (i.e. laziness)

- A huge unpainted backlog of incomplete projects, which means I froze buying new rules/minis (therefore not a lot of rules to review/have an opinion on).

Anyway, it's holiday time and I finally got some time in my shed.  It's a shared shed now - the kids have bunkbeds and a LEGO table alongside my bookcases and hobby area. I don't mind - I got my second shed due to consenting to have a second child, so I figure I owe them! 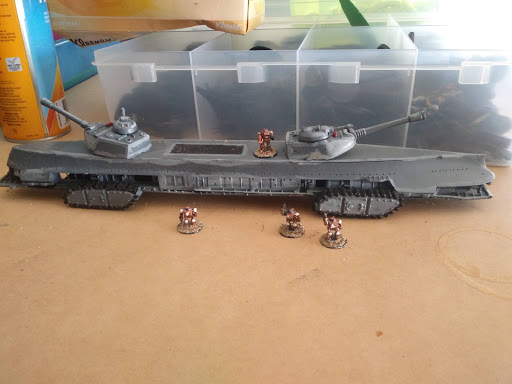 My daughter did not paint her mechs bright pink like she threatened....

What the kids did...

I decided to get them to paint some small GZG not-VOTOMS mecha (where bright colours that "pop" are a good thing). I was braced for a pink mech force but my daughter was quite restrained and went for copper instead. It took about 30min to do 4 each, and I can recommend doing similar size (~15mm) as you don't need to use as many colours/layers/detail. They are going to do another 4 or some support vehicles/tanks next time.

I like the idea of a Mordhiem/Necromunda campaign game where mecha/tanks/aircraft base out of a mothership, like Homeworld (or Deserts of Kharak).  Where you have a limited size for your warband (i.e. 6-12 units) and you can upgrade the units AND the mothership in a campaign. One of my many homebrew rules...

What you see is a pair of 1:700 Fujima carriers I found in a box, which I mounted upside down on the separated tracks/turret of some $2 kids toy tanks.  This also took me ~30mins as I did a pretty casual job. (My standards drop to match the time available - we had to call a halt to go visit grandparents!)

I've also gone through the blog comments, removing the (often unintentionally hilarious) bot spam. I'm sorry, but if you are looking for penis enlargement tips, you will have to look elsewhere! 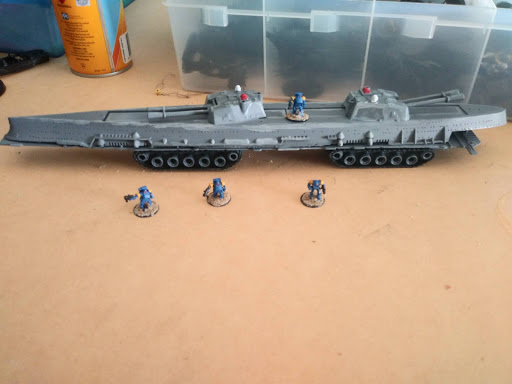 My son, predictably, went for blue... They're rough, but I'm content with my 30min 'made from junk' landships.

Since I have the kids painting mecha, I've an excuse to buy Osprey's Gamma Wolves which I hear has an interesting "countdown clock" mechanic, as well as revive my own mecha rules (starting from scratch). On top of that I splurged on Reality's Edge which actually reminds me a lot of an early iteration of my modern pulp rules (identical activation, d10 resolution method). The kids are interested in Wild West at the moment, so I'm eyeing off Dracula's America. I'm open to other ideas as I've no idea what is hot at the moment, though I see Osprey is pumping out bucketloads of rules.  My focus will to be skirmish or any game where you only need under 15 or so models per side as I am wary of painting paralysis.

On the 'home rules' front I am perenially experimenting with supercavitating 300kph sub rules, my MTBs-meet-Descent and drift mechanic big spaceships, as well as mecha and tank rules, "Middlehiem", and aeronef - but the rules are not up to date due to the computer 'splosion.The increasing paperwork at my school means my enthusiasm for typing (or re-typing) is low.

Is Delta Vector back?

Maybe? After such a long break I'm not sure anyone cares, but in my blog clean up I noticed the game design posts still get a lot of interest (perhaps bots?). I'm probably out of the loop, but I still have been re-reading old rulebooks and tinkering, and I have made some notes lately about activation, leaders vs heroes, the lameness of Bolt Action initiative system, and how videogames can add ideas and accessibility to wargames - which could probably combine to share a post.
Posted by evilleMonkeigh at 19:10