In my hunt for suitable mechs - inspired by Gamma Wolves - (actually, I've decided to make my own hitpoint-free house rules) I've gone back to my 15mm sci fi roots (originally, this scale + spaceships was the main focus of this blog).

These are some old GZG "Krusties" I quickly re-based and touched up in the 40min I had spare today. 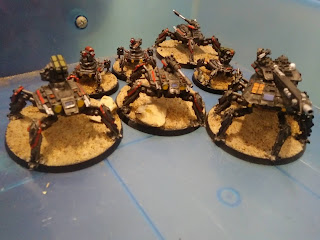 There are small, medium and large mechs - enough for a small battlegroup. 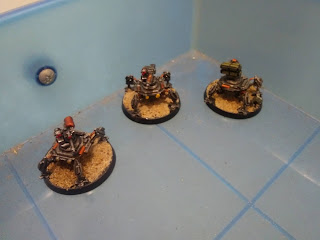 I prefer relatively neutral colour schemes so I can swap mechs between several forces. 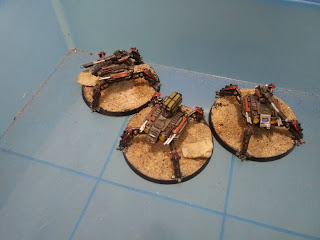 I may remove the orange stripes leftover from my original paint-job. I think I wanted a District 9 vibe. 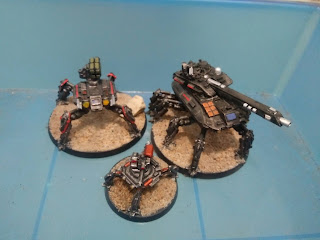 Anyway, digging through my 15mm boxes (I've got about 5 unpainted armies.. from 2015!) has got me musing about 15mm rules again. I think 15mm is best at platoon level, as the infantry look good in squads with a few vehicles; but less impressive at squad level skirmish where soldiers move individually - that's where 28mm toys are worthwhile.

I've recovered my old SSD and have discovered drafts of two old 15mm projects where I attempted to get away from both gritty Stargrunt Vietnam-in-space and traditional Rogue Trader sci-fantasy.  One was a very cyber-hacking-drone centric game emphasizing flesh vs machine (basically, prettier cyberpunk if I'm being honest) but the other is more unique - where demons (represented by a "magic resource point pool" a bit like an off-table Warcaster) direct (and possess!) special forces teams that battle through space stations and mining colonies. Think Mass Effect meets Demon:The Fallen meets Alien meets Warmachine.

I'm probably going to construct the second game on this blog - it's not a unique thing to do, but the only time I see folk do this is when they are peddling their Kickstarter game.