This can be seen as a continuation of my 5Core skirmish rules review.  My two main concerns about 5Core were the absence of troop quality and the somewhat bare bones nature of the rules. Weighing in at 91 pages this “supplement” is actually 4x bulkier than the parent system, so fleshing things out shouldn't be an issue.

Fluff
The setting has a bit of a “Firefly” vibe (a good thing, for me, anyway) with most campaigns occurring in outlaw "fringe" space away from the all-powerful Unity government.

5 Parasecs did make me contemplate painting some 15mm sci fi minis. Which is always a good sign for a rules set.

Crew/Unit Creation
You start with a few heroes and a handful of goons – about 5-6 minis and no more than 8 to start.  Character creation is very RPG-y.  There are d100 tables where you can randomly create the planet of origin, motivations, class and special skills of characters – most of which are “background” and have no impact on actual gameplay.  There are about 40+ “talents” or special skills, 20+ flaws, and 20+ of alien traits.  At the end of my 5Core review I somewhat wryly said there would doubtless be "80 special skills and abilities to make up for the lack of stats" - amusingly it looks like I hit the nail right on the head!

There is also a range of ~20 psychic powers.  Heck, you can even randomly generate the spaceship you fly around in, friendships and rivalries and how you met your creew  - if that isn't Firefly I don't know what is.   There is no "points system" and this campaign system is definitely not even remotely designed for the competitive club scene - its more for playing with casual mates/RPGers than the local 40K rules lawyers. 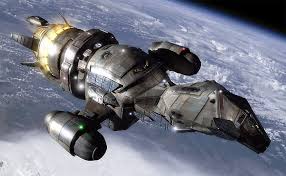 "You can't take the sky from me..."  ... bounty hunters doing dirty jobs, staying one step ahead of the law...   5 Parasecs borrows heavily from Firefly/Cowboy Bebop

Campaign
You can see clearly how 5 Parsecs is aimed at the zone between skirmish wargames and RPGs (an area dominated by Two Hour Wargame titles in recent years).  It is not a good competitive system and could be easily abused.   The campaign, like the unit creation, is very much about making a story.

You can roll on tables to find a patron and get a job.  Your crew can trade and acquire items and see the sights. You can track down enemies and random campaign events or random character events can complicate matters . Your characters can gain new skills and traits and you can recruit new crewmembers.    Finishing missions gets you rolls on the loot table.  There are tables for generating encounters, and opponents, and even their weapons.  If the mission involves destroying or capturing a target, you can even have a table for what sort of target it was.

Basically, this is a RPG, with more tables (20 pages worth?) than you can shake a stick at - without getting a sore arm, anyway. It has more tables and stuff to do than Mordhiem, but it's not aimed at the same niche - 5 Parsecs is about generating a story. There are even tables to tell what tables to roll on (OK, I made that up).  Suffice to say, there is a lot you can do on a campaign, though none of it would be "balanced" for competitive gameplay in the slightest. There are even some Gamemaster tools for travel and player actions, and reactions by NPCs.  You'll like it if you like RPGs like Savage Worlds, THW: 5150 or Song of Blades campaigns (< though SoBH has a much sketchier campaign system) - but it is not the new Necromunda* (*On a side note, the person who does make the "new Necromunda" is going to make a mint.)

Scenario Rules
These are extra rules to add onto the base 5Core system for scenarios such as hacking, bluffing/persuading, doing field repairs, NPC reactions, climbing, falling and blasting open doors.

Weapons & Gear
The weapons section gives more detail on a good range of weapons - blasters and slug throwers, electric guns, flamers - that covers most sci fi situations.  There's flak, combat and power armour, and a range of melee weapons. Sentry guns, portable shields and teleporters, jump belts.  In short, a goodly selection allowing you to cover most sci-fi situations.  Like the base  5Core system, it does a solid job of giving a range of weapons using rather limited rules and modifiers.

GZG's 15mm "Free Trader"pack reminds me of a certain crew....

TL:DR
Five Parsecs from Home is a RPG lite - a campaign allowing you to take a bunch of minis on adventures.  Firefly-style adventures at that.  It does not fill the Necromunda void of warband v warband combat, but is more like a friendly version of the old Rogue Trader where wargaming and RPGs get hazy.  Two Hour Wargames has already filled this niche with its 5150 sci fi series but Five Parsecs gives it some much-needed competition.  Like 5150, 5 Parsecs focusses more on what is happening before and after the game, rather than the game itself.  I'd say 5 Parasecs is superior as a campaign-story-generator, as it has more campaign options and "tools" and provides faster, more accessible gameplay once you get minis on the table.

Recommended? Yes.  If you're after a story-based skirmish campaign with a RPG feel but simple combat rules, 5 Parsecs delivers.  Whilst it does have the 80+ special rules I predicted, it fleshes out the 5Core system and gives you a good toolbox for making space adventures with whatever cool sci fi minis you've got laying around.  Personally,  I think it should have the 5Core rules included within the 5Parsecs supplement, but  there is a discounted "bundle" you can buy on the Wargames Vault.