This article has perhaps been coloured by my introduction to wargaming; four vastly different games in the bookkeeping spectrum - Starfleet Battles (need a degree in accounting), General Quarters, Rapid Fire and DBA (record keeping, what record keeping?).

Argument:
1. Record keeping needs to have an enhancing effect on gameplay
2. Game designers need to judge the tradeoff between the benefits of record keeping and time

I'm approaching this article with a few thoughts:
What is an acceptable amount of book keeping?  When is it uneccessary?
When does record keeping add value/interest to a game?
What about the infamous "Hit Points"? 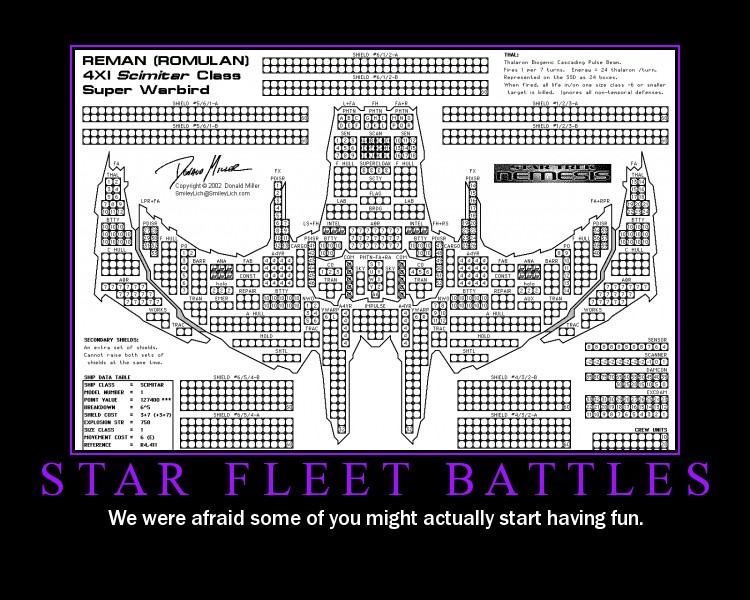 If you wondered why I am passionate about record keeping... this was my introduction to wargaming...

Decisions vs Resolution
Decision making - where you are deciding the actions of your forces
Decision resolution - measuring, moving models, chugging dice, record keeping

A good game maximizes decision making, and minimizes time spent "resolving."
However having good resolution mechanics can enhance the game and decision making.
Sometimes the record keeping enhances the game, and is worth the time taken to do it.

Example: You have thought up this really cool magic mechanic that allows you to create your own spells on the fly.  It makes your skirmish game unique.  However it requires you to track each model's magic points with counters and adds 50% more time to a game turn; the average game has gone from 2 hours to 3 hours.  Is it worth including?

Recording in Skirmish Games
Most platoon-level+  infantry games have a binary dead/alive mechanic; a figure is either alive and fully functional or dead and removed from the table.  However skirmish games often use ""hitpoints" like their RPG cousins. Is this needed?

Let's look at some "categories of injuries" - if we ignore insignificant cuts, bruises etc which have little effect on fighting ability, and we also ignore death/critical injuries that means they can play no further part in the fight we are left with:
Minor - deeper cuts, cracked ribs and similar which impede fighting ability somewhat
Major - broken limbs, severe concussion - injuries which severely handicap fighting ability

Ongoing - injuries which worsen over time; i.e. bleedout, poison or being on fire

You can correctly point out these conditions are hitpoints under another name; but the point is there's no reason for more than 2-3 hitpoints; and it is the condition the character (effects of injury/status) that should be the focus.  A game where a character can have 1 out of 10 hitpoints left and function perfectly fine, is wasted book-keeping.  Why am I ticking boxes if nothing happens in game?

Good Example: I liked the cinematic effects of melee in Song of Blades - minis could be pushed back (creating new tactical possibilities), knocked down (where they were easy to finish off), killed or even spectacularly killed (with morale effects on those standing nearby.)   There was no record keeping and the four different effects were all done in a single die roll (which was the to hit AND damage die roll).  That's an example of it done right - minimal record keeping and die rolling, but lots of interesting gameplay effects.

Recording methods:  Counters vs Cards
Whilst scribbling down notes on a piece of paper has thankfully become something of an anomaly, we have two main forms of record keeping which are trendy at the moment.

Games like Warmachine (and its sci fi spin-off Gruntz) have popularized the use of small unit cards. They even have handy computer programs allowing you to produce and print your own.  In neat card sleeves, these can look quite attractive beside the table and are a handy reference.

Another option is the use of counters. A lot of people dislike these, saying they clutter the tabletop, but I notice the people who are artistic enough to care are also usually good at thinking up cool markers that "fit"with the theme - i.e. blood spatters on a clear counter for a damage marker, or a specially decorated base/diorama.  Basically, if they can make a lovely terrain board, they can also make cool counters that fit. If they don't, they shouldn't be complaining, as they probably have bigger immersion-breaking aesthetic issues than a few counters.

Written orders are another form of book-keeping. Designers seem to be increasingly getting round this, and I would say this is something that needs to be very carefully considered before we include this in our game.  Do we want our players to be writing stuff down, or pushing miniatures around the table?  It also has obvious time considerations.  Personally I find written orders in aircraft games (Check Your Six is a popular example) as a major immersion breaker - in a fast paced form of combat, it seems weird to pause from the game and write "left turn, up one level, +1 speed" - then reveal moves like the end of a poker game.  However, written orders in plane games are "traditional" so I'll probably get shouted down on this.  (I'll have to do an article on "traditions in wargame genres"- it's amazing how rules within a genre tend to follow certain conventions).

Hitpoints (Ok, this is a bit of a hobbyhorse of mine, but I enjoy flogging it...)
Hitpoints can take many forms.  Removable miniatures on a base (i.e. 20 elves on a movement tray in Warhammer Fantasy) are effectively hitpoints of a single unit.  (It's a reason I hate WFB - the back rows of troops in a formation are, effectively, elaborately painted hit markers. And I dislike meaningless painting)  Actually the one that takes the cake was a Mantic game (KoW?) - you have a block of 20 troops, but instead of removing minis you add hit markers.... logically, either the 20 models or the counters are unnecessary)

Meaningless hitpoints
I dislike Aeronef's hitpoint system - a dreadnought might have 32 hitpoints, and nothing happens until you tick off 8, then you remove 25% of firepower/speed.  Then you tick off another 8, and remove 50%.  Basically I ticked 32 boxes and got three gameplay effects (four if you count removing the exploded 'nef at the end)  That's a lot of meaningless box ticking (and dice chugging to get those hits) - lots of "resolution time" without adding any "decisons."   I'm sure when a real ship gets shot, and its speed drops to half speed, the captain doesn't say "relax boys, it's another 8 hits before anything else bad happens!"

Hitpoints are particularly prevalent in naval/space games.  However I am dubious a real spaceship/ship captain would know (or even care) if he had 18% or 20% hull damage, or even be able to tell the difference (Ok, maybe on Star Trek...)  A task force or fleet commander (most wargames you have 4+ ships) would be even less precise.  I'd suggest they'd be more concerned about what was broke, and what wasn't.
"The point defence is out of action"
"We can only make half thrust"
"The fires are out of control on the hangar deck"
"All aft turrets knocked out"
Most games have "critical hit" systems tacked on, but I'd suggest it is the "criticals" a task force commander would be most interested in - not if a particular ship under his command had 67 of 80 hitpoints.   I'd suggest a fleet admiral would be even less concerned with particulars - probably more in terms of if a ship could keep formation, defend itself or launch attacks effectively.

Hull integrity IS a factor - it's important to know when you have more holes than hull/when you're about to run out of duct tape - but it can be abstracted to its effects - which is all we care about. The author of Bulldogs Away concentrates on the effects:
Damaged
Heavily Damaged
Wrecked/Crippled
"Kaboom"
Again, I agree these are just renamed "hitpoints".  Basically, the three damage stages aligns with the meaningful 3 effects from Aeronef  (the 25%, 50% and 75% penalties)  - without all the box ticking in between.

My point is, from the viewpoint of a task force/fleet commander (which we, as players, tend to be) dozens of hitpoints are needlessly excessive.  Game designers need to concentrate on the effects of hits. If the hits are meaningless (the shot knocked over the captain's coffee mug or shot the tail off the ship's cat) then why are we recording them?

When is record keeping a good thing?
When it enhances your game.  When it is the only way to do x in the game.  When it introduces gameplay decision-making tactical opportunities that outweigh the complication/time cost.

For example, Infinity has an "order pool" of counters or markers.  This is record keeping.  However it is GOOD record keeping, as:
(a) it allows a unique activation effect where one unit can act more than once
(b) it adds a layer of resource management
(c) it is simple and quick to resolve (just remove counter every time you activate a model)

The order pool is record keeping, but it enriches gameplay with an insignificant trade-off in time/complexity. This is a great example of good record keeping.

Another good example is the use of Might, Will and Fate points in the LoTR:SBG.  These are "resources"which need to be recorded (usually represented by counters but can be noted down).  However they can only be wielded by heroes (which are relatively few - say 2-3 in a game) so the overall time/complexity issue is minor.  In return, they add a layer of tactics and resource management. Players can spend them to influence die rolls OR the activation/move sequence.

There are other times when record-keeping seems unavoidable. In age of sail games, the objective was often to capture rather than sink an enemy ship: by slugging away at it (often over hours), killing crew, knocking down rigging, and taking weapons (often 74+ cannons) out of action.  Whilst I would LOVE a book-keeping free age of sail game, I don't see how one could capture the flavour and combat of the period.

TL:DR
Record keeping should have a direct impact/effect on gameplay - there should be no meaningless box ticking.

When a game designer introduces any form of record keeping, he should ask himself if it is worth the tradeoff.  Does it introduce decisions, tactics and gameplay depth that offsets the tradeoff in time/complexity?

I knew someone who owned an incontinent Persian cat.  The owner thought it was amazing little precious fluffums. To everyone else it was a pest who constantly p***ed on the furniture.    The point I'm making is the game dev may think his rule is brilliant, but as it his special brainchild he may not be able to see it is a problem in the long run.  That's where playtesters come in - a component increasingly bypassed in an era where self-publishing is easy.

Record keeping can add decisions, tactics and depth to a game. Sometimes record keeping might be unavoidable.  However, we need to always check - is the tradeoff worth it?
Posted by evilleMonkeigh at 07:53