I've been seeking a skirmish game to go with my newly-arrived Warlord Greeks.  I was thinking skirmish games, with a warband that could explore and do battle with various mythological monsters as well as human warbands, so Crooked Dice's 7th Voyage looked very interesting.  With my PayPal account bulging with birthday loot, I unhesitatingly pulled the trigger on the $60 (gulp) rulebook.  A good decision?

The Shiny
It's a well-presented 90-page hardback.  It's easy to read, with cartoon silhouette art and the odd miniature picture thrown in.  Kinda slender for the cost, but solid production values. A quick reference sheet, photocopyable templates and unit sheets and a range of creature/unit types in the appendix.  The game is meant to mimic TV shows, so the terminology uses "cast" for warband, and "stars and co-stars" instead of heroes. 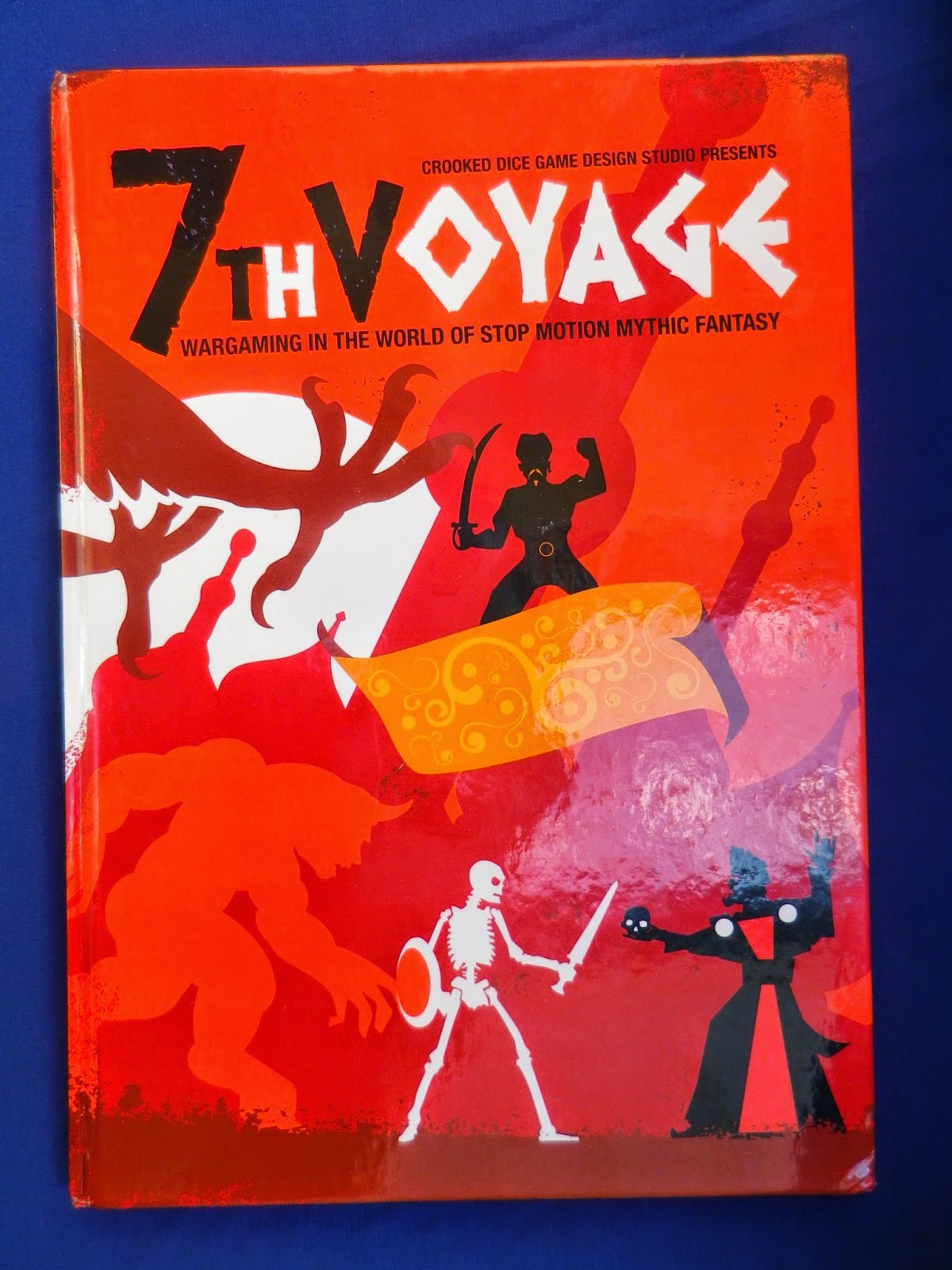 Game Engine
The players roll a dice to see who starts first in the turn.  The difference in the dice becomes the audience appreciation score which is shared 50/50 between the players.

The audience appreciation is a resource which can be spent to add +1 to a dice roll, or extra activations. A simple form of resource management that adds interest to the game.

Units get activation tokens equal to half the models they have, rounding up.  So basically half your models can activate.  Once activated, a model can take two actions (like move, shoot, aim or melee). Some actions (like going prone) are free and do not count.

Players can also have a hand of three event cards which they can play at times to influence the action - usually to give extra cinematic events and drama to the battle. 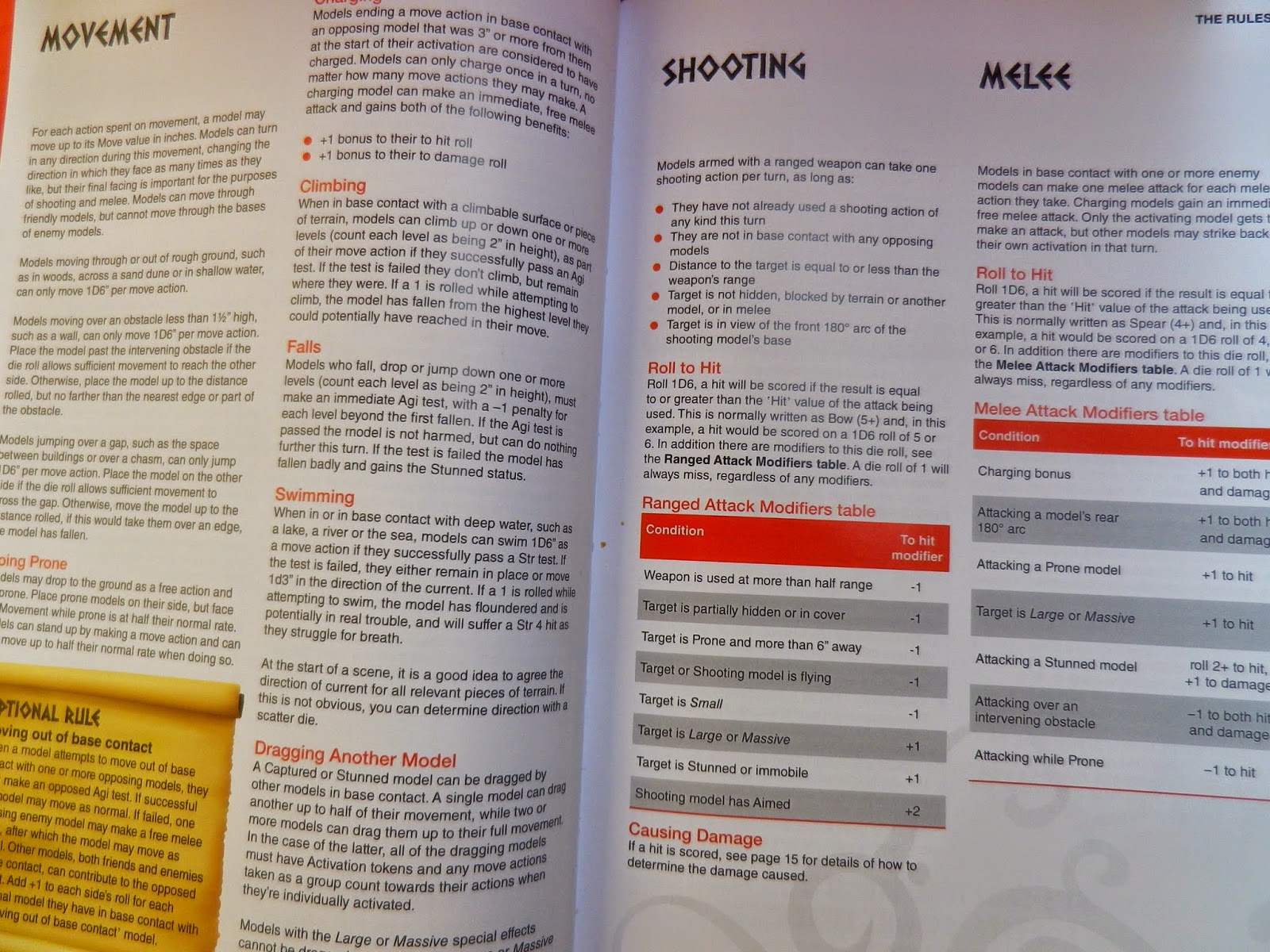 Except for activation, the rules are pretty simple and generic.

Movement
Nothing new here. Units move their "Move" stat - or 1d6" if in tough terrain/jumping.   Charging models get a melee bonus.  There are rules for climbing (and naturally, falling), swimming, and dragging other models.

Combat
Minis roll to hit, i.e. 5+ on d6, or whatever their skill dictates. Identical to games like LoTR - simple and familiar. Melee works the same - roll a d6 and score say a 4+ to hit. Units can roll an extra dice but their enemy gains a free counter attack.  Super simple and both sets of rules are a paragraph each.  Quite a few modifiers though. I will probably sound a bit snobbish when I say these are similar to a rule-set I wrote when I was 12 years old.  Oh, you can choose to push models back or knock them down, but I can't imagine that many circumstances where I would prefer to do so.

To check if a model is wounded, you roll on a table which indexes the attackers' strength and the defender's defence.  I'm not sure if this chart is identical to the ones used for 40K/WFB/LoTR, but I wouldn't bet against it.  Unarmed attacks usually stun rather than wound the enemy, and you can capture foes instead of killing them.

There is a roll you can make to perform special actions (like pull a lever) and morale rules which are similar to the usual i.e. test if you have isolated minis, have lost half your models, or you face an enemy that causes fear.  There is a victory point table for defining the margin of victory.

Magic
Models get a magic pool of d6 which they can spend in their turn.  You can choose a number of d6s from the pool, and add this to your Intelligence stat.  If it equals or beats the difficulty of the spell you succeed.   Summoned creatures must be purchased at the start of the game, but require a successful spell to bring onto the table (and can be banished off it as well.)  If models have "Luck" they can spend it to re-roll dice.

Weapons
There is a solid list of 28 melee and missile weapons that cover everything you need - spears, clubs, swords, daggers, bows, slings etc. Even tails and tentacles.  These have a "strength", range, cost and special effects, like parry and thrust.

Special Effects
These are the usual special rules, traits and abilities.  There are 44 (69 if you count the monsterous and otherworldly traits). Some cover areas like combat, knowledge, physical traits - and may include disadvantages like slow or weak willed. Plenty of descriptive traits, and explained clearly enough. 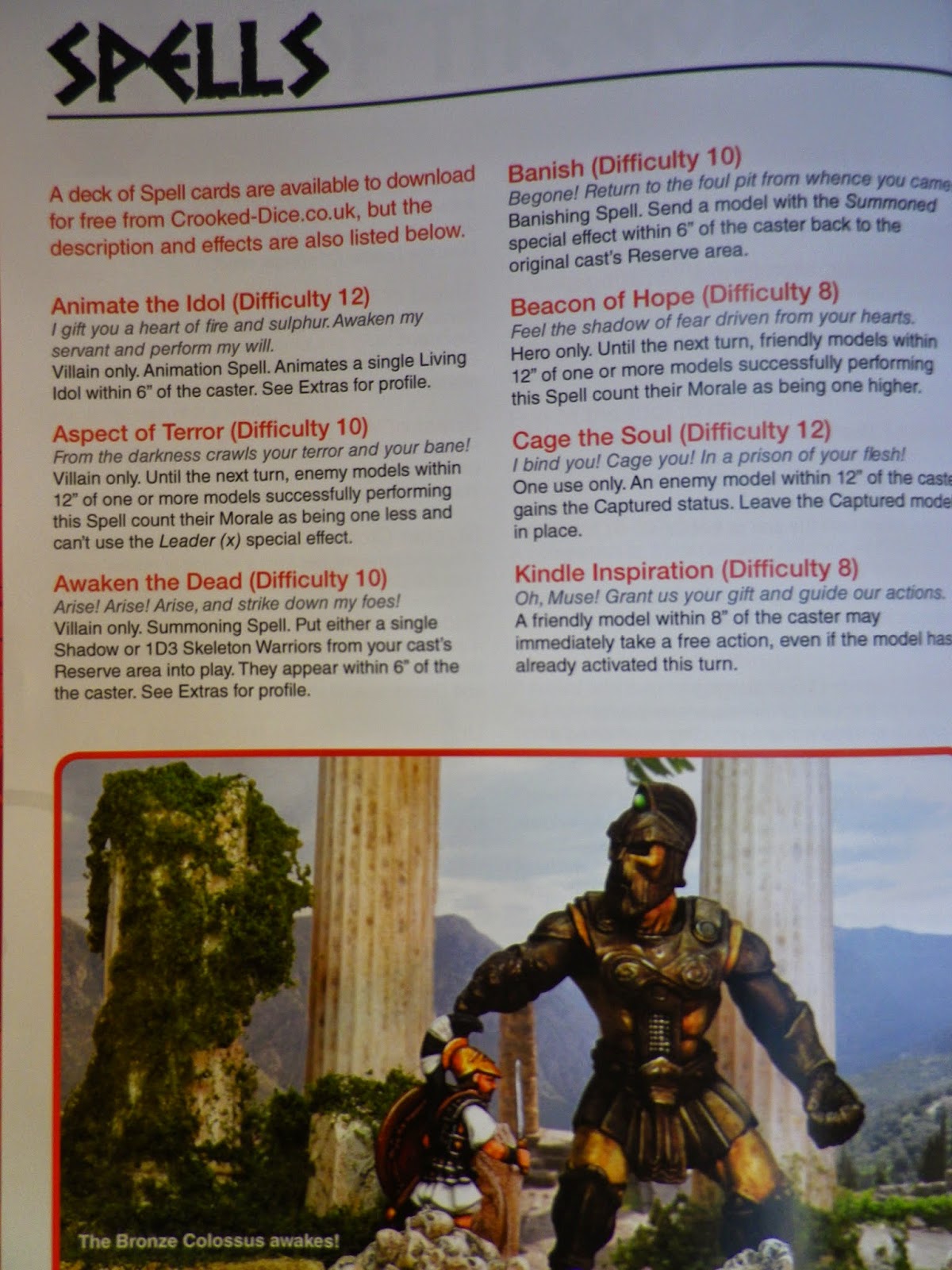 I'm a sucker for pictures of miniatures in game
Unit Creation
There are a bunch of archetypes.  Each group has a star or co-star. You can amend their stats and abilities to an extent, as well as weapons. spells and equipment.  Not a true "create your own character" from scratch like Song of Blades and Heroes, but quite customizable.
Dashing rogues, favoured champions, wise elders and enchanting beauties, deadly assassins, vile tyrants and brutish bodyguards - there's quite a bit to choose from, though I'd have preferred a bit more freedom.

The rules for "Extras"i.e. the non-hero grunts and minions, include a range of civilians, soldiers, sailors and monsters - covers most of the "generic" characters but may not cover all your needs.  Not a big deal, given I can't see 7th Voyage being played competitively - you can simply mod other similar characters or creatures.

Scenarios & Missions
Jason & the Golden Fleece, Gorgon, Sinbad's voyages, the Thief of Baghdad are missions with pre-made "casts."  The sides of good and evil can have a straight up fight, but there are scenarios you can dice for (battle, escape, race, skirmish, steal, assassinate) and there are also random terrain generators (though you'd have to own a wide range of terrain for these sorts of things to be useful.)
There is a list of magical items/costs and spells /difficulty, as well as a list of event cards.

TL:DR
I think it suffers for its $60 price tag.  I look at it, look at the Song of Blades pdf for $8, and think "I could have had a spare $52 to buy miniatures."  It has no better rules or content than $18 Osprey books like In Her Majesty's Name, for more than triple the price.

In fact, I've ordered the mythology-specific SoBH spin off by Osprey - Of Gods & Mortals ($18) - which will make for an interesting comparison when it arrives.  As it is, I regret the money I spent on 7th Voyage - it would have been O.K. for $20.  (The pdf is ~$22 but even that is a premium where most pdfs are ~$10; I'd expect a printed rulebook for that) EDIT: Review Of Gods & Mortals is here.

Recommended: Not really. Whilst there is nothing wrong with these rules, unless you really love the "we're pretending this is a TV show" vibe, or you like paying a premium for a hard-backed rule book, there's plenty of other games that do the exact same thing or better for much, much cheaper.
Posted by evilleMonkeigh at 21:51