I'm determined to make inroads in my unpainted LOTR mountain.  While I have not even touched Rohan or Easterlings, I have made significant inroads in Elves, Gondor, Dwarves, Uruk Hai, Moria and Mordor. 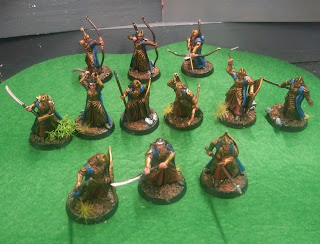 First, the 12 Galadhrim I said I would paint. 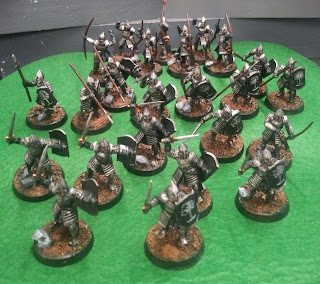 The, speedpainted some 24 Gondor to get some runs on the board. They only take a few minutes each. 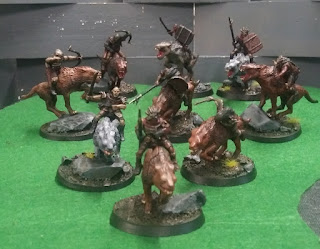 Man, the old school warg sculpts are BAD. Huge mold lines, joins, etc. I admit I was even more casual than usual painting them as they didn't seem 'worth it' neither did I feel like mucking around with greenstuff. 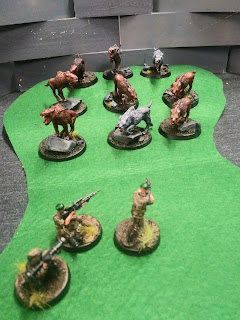 The 9 wargs will also serve as monsters in my "Forgotten" homebrew horror rules. Here they confront some luckless Eureka legionaires. I have painted 12 of these.  They are nice sculpts but like most Eureka stuff the legs are a little stumpy. 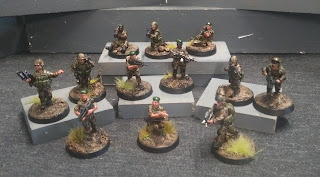 I also touched up some 11 Empress US troops. Both Eureka and Empress work well together although both have some weird poses. I'm not a military expert but the poses just seem 'off'. 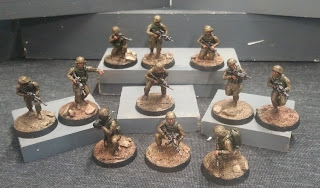 I've also eyed off Spectre (the third 'big' name in 28mm moderns) as they have some great PMCs but the prices (and postage) are a bit steep. It worked out $190AUD aka $140USD (including $50 postage) for a softcover rulebook ($50) and about 10 minis. It makes GW look like a bargain - a starter 40K box with a rulebook, terrain and 30+ minis is only $120AUD. Yikes! I'm all for supporting smaller mini companies but there is a limit. I'm probably going to go with Empress in future because of the aforesaid stumpy Eureka legs and prohibitive Spectre pricing. Also Empress has interchangable heads allowing me to make unique special forces wizards for my paranormal squads.