I was looking at the 40k models mouldering in my garage, pondering on how to convert them for Tomorrow's War.  And I was thinking - why did I never enjoy 40k?

I could rant on for ages about GW the company, its pricing and practices, but what did I actually dislike about the rules? (besides the fact they are played primarily by teens, people who are unaware of any games besides GW, competitive nerds, and those with bad body odour, and sometimes a combination of the above?)

Oh - and I see GW has another price rise. Congrats! 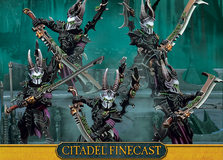 At $63 for 5, these figures are literally worth their weight in gold. I believe that Finecast resin is harvested from Pandora. The cost of battling Na'vi insurgents is what caused the recent price hike.

Anyway here are the main gameplay concerns I have about 40K:

6. Cover saves and armour saves being the same roll. Heavily armoured troops have no reason to take cover.

7. Lack of modifiers to targets or firers depending on context of combat

Ok, time to try some changes. I want to make the minimum necessary and retain the most of the original rules that I can.

#1.  Alternate Unit Activation
Each player may move 1 unit or hero figure, then the other player moves a unit.  Hero figures may be moved and take actions along with the unit as long as it is in 2" coherency range.

Firing a gun is 1 action

Melee is a free action

1. Each unit that has an enemy take an action within 12" of it may make a Reaction.  A reaction consists of


(b) a single firing action

2. A unit that has not activated, and reacts, loses one of its actions when it activates.

3. If a unit has already activated, it may make a single free reaction if it passes a Morale Check

4. If enemies have just moved into view (line of sight) units may have to pass a Morale Check to react

5. If a unit fails a Morale Check it may not make any further reactions that turn

*If this is over-used, make it a d6" move to make it more of an unpredictable choice.

#4. Cover
Units make a cover roll before hit are applied. Then they make their armour roll. Then they compare weapon Strength vs target Toughness.  Now even Space Marines like cover!


This obviously needs a little tweaking and I am getting out a few boxes of 40k figs tonight., wife permitting.

Aaagh this is unbalanced - shooty armies are too powerful!
Tough titties.  40k isn't even remotely balanced as it is - some 'lists' are unbeatable by other lists.  Competitive gamers have "opponents" who will argue over the rules. For those with friends, messing up the points value of shooty vs melee units isn't that big of a deal - they weren't planning on winning on the strength of a uber-list they copied off a forum somewhere - they just wanted to push models around. And if you are still using 2nd edition or RT cos your mates think it is more 'fun' then you may enjoy experimenting with these rules.