I have often looked at these, and always decided against a purchase as (a) I lack a set of good spacefighter rules* and (b) the webstore paintjobs do not cast them in a very favourable light. 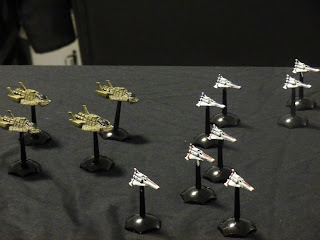 Wife's words: "I think Vipers are the coolest of all spacefighters"
Husband interpretation: "Go buy some Viper minis"

However last week my wife mentioned that Vipers were her favourite of all spacecraft, so, ever the opportunist, I decided the time was right to "dip my toe in" with a test purchase.  The communication was instant, and when I decided to change my order a minute after pressing "Send" it was adjusted promptly. (Without any comment about idiot customers..)

The minis made the journey from USA to Oz in very fast time (5 working days) and I was very impressed when I opened the box. 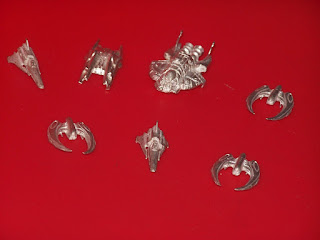 A remarkably clean cast. The Raptor seems oversized and the Heavy Raider undersized.
I wish they were all 50% bigger.

More specifically, what struck me was the total lack of the usual flash, or miscast mold bits typical in most metal models.  I was really impressed. The casts are so clean I wondered if Mr Bergstrom checks them and trims each individual model before packaging. There literally was 0 prep time (besides 1sec taken bending back a Raptor "Rapture" fin that had been twisted in transit).

In addition, all the models fit perfectly onto a "standard" EM4 flight stand.  With most other spacecraft I have had to resize or drill out the holes but they simply popped onto the bases without fuss.  I certainly regard the models as excellent value, considering they are only $1.50each.

The "Rapture" has well-emphasized features which will drybrush well. It seemed larger and somewhat out-of-scale with the other fighters.  In fact it is the size I'd like the others to be - i.e. about 50% larger.  The minis have good detail but I'd have liked them just a tad bigger as they are on the small end for 1" fighters. 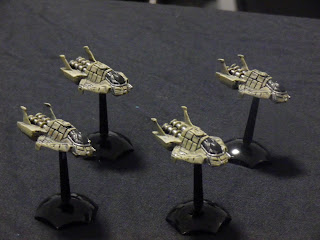 The Raptors were the best sized models, with details that really "popped"

The Viper "Cobra" cannon mounts impressed me (seriously there was NO flash around ANY protruding bits for any of the models I ordered) and I definitely think the Mk.2 Cobra is the best of the Cobra models on offer.

The "Zylon" Raiders were sleek and evoked their movie menace with only a simple metallic undercoat. For me, the Heavy Raider "Turkey" transport (you know, the one with the quad miniguns) was the least interesting model and seemed rather small, especially in comparison to the chunky, bold Rapture sculpt.

My only gripe is that all the models, except for the Rapture, seem a tad small (I'd like them 50% larger); especially the "Turkey" transport. 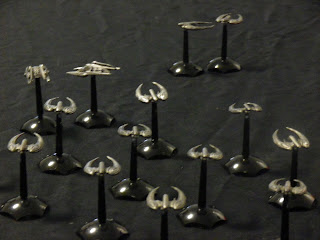 The Heavy Raiders seemed small compared to the Raiders


PAINTING
Due to the total lack of prep I had time to whack a quick coat of paint on the models.  I'm sticking to "canon" paint schemes, with the goal of (a) taking as little time as possible, yet (b) doing better justice to the models than the online shop paintjobs. After a quick spray of black undercoat:

I stuffed up the Vipers as I used my stiff drybrush by mistake, giving the paint a "textured" look; I also rushed the detailing stage as I had to go out for dinner.

I probably should have done more coats but remember I don't like painting and I have a LOT of projects to finish up, not least my latest batch of Infinity terrain.
(OK, you might say "Then why the heck do you collect wargame minis?" Well, as an example, I like the feeling of satisfaction I get from mowing the lawn. Doesn't mean I enjoy sweating in the sun pushing a mower, though. Ditto wargames painting and terrain prep) 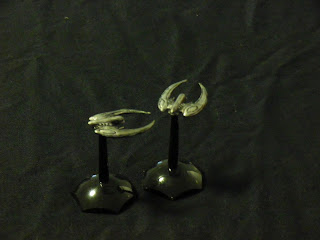 The Raiders have swooping lines that radiate menace. Easy to paint too!


TL:DR
Excellent service and astonishing lack of casting defects (0% flash). These crisp models are far far better than the online shop photos suggest.  My only complaint (such as it is) is that I would have liked the models to be about 50% larger. They are also surprisingly cheap at $1.50 each. ($3 for the larger fighters, including a flight stand.)

There is also a line of smaller "fleet scale" fighters and Full-Thrust sized basestars and battlestars to accompany them; I suspect this would actually be the more popular line.  I think a lot or people would naturally pair them with the Colonial Battlefleet** .pdf rules from Steel Dreadnought Games. 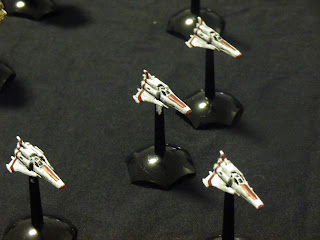 I kinda stuffed up the Viper paintjobs - they look almost as bad as the minis in the online shop :-/

Footnotes:
(*And if you're going to suggest "Silent Death" we'll have to agree to disagree as to what makes 'good' spacefighter rules). I have high hopes of the upcoming Blue Shift rules and fighter minis - even though they are made by Mongoose.

**If anyone wants me to review these, I can dig them out.
Posted by evilleMonkeigh at 05:19