Lord of the Cheapskates: a LOTR Latecomer

After years of being a GW hater (I haven't bought GW product since 2008, discounting the Space Hulk boardgame 2nd ed which is, I notice, worth more than it was originally) I have been buying GW again. What caused this change of heart?  A random flick through the GW website to look at Specialist Games downloads triggered the following thoughts:


Fact #1: Any game which GW has let die are their best ones. Rather like TV shows Fox cancels.
Bloodbowl    Space Hulk    Epic   Man O War  Mordhiem   Necromunda  Inquisitor  Battlefleet Gothic...  a roll call for the fallen - I rest my case

Fact #2: LOTR looks in danger of dying becoming a "Specialist Game." Having to stay within New Line parameters tends to hurt the creation of new models (re-releasing as "FineCrap" is not a new model); after the movie "The Hobbit" there seems little impetus for supporting the game (or renewing the licence); LOTR is both less popular than "kiddie crack" 40k and WFB and is vastly cheaper with a single troop box and a few blisters needed to play (something GW is trying to address by making the mass battle "War of the Ring" to push more mini sales)

TL:DR - Conclusion: As GW's best and most consumer-friendly games are the ones they have dumped, and LOTR looks headed for similar "Specialist Game" fate in the not-to-distant future (post Hobbit movie) - and indeed seems to be a "Specialist Game" in everything but name; LOTR must be a good game. Therefore I will start collecting LOTR minis. 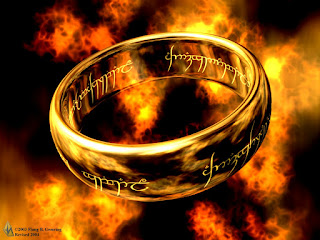 I've started to watch LoTR again and man, Frodo irritates me. In fact, a "Frodo", aka
"a little turd that will not let go of the ring" has been used to describe toilet problems in our house.


The "bastard stepchild" of GW's core series, LOTR is the least popular with powergamers  the core GW demographic as model differences are less marked and forces are more balanced bland; magic is subtle and not a "I win" button boring; and the rules are cleaner and faster too simple.

(Interestingly LOTR:SBG has formed the basis for the historical skirmish games "Legends of the Old West/High Seas" and heavily influenced the VSF game "Empire of the Dead.")

The focus is on recreating skirmishes from movie scenes, which I find of limited interest, but what I did like was Battle Companies.  A simple, Mordhiem-lite campaign system for gaining experience, skills (and if unlucky) wounds and you only needed a single standard troop box to play!  As usual with all its good ideas, GW had shelved it (and deleted it off its website).  Here is an archived pdf link: Battle Companies.


Like many I bought a Mines of Moria box set in an initial burst of enthusiasm, played it a bit and let it collect dust.  A quick trawl through ebay collected me a decent skirmish force for $30 delivered.
A box set of Gondor troops (8 archers, 8 spears, 8 swords); some metals (3 Gondor rangers, 3 Fountain Guard elite troops, plus heroes Elendil, Denethor, Faramir and Isilduir.   That's pretty darn cheap - not even enough for a single 40K unit. 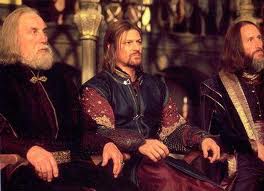 The unlucky Boromir has 0 Fate saves. But anyone who accepts the will of the idiotic Council deserves what they get.  Walk into Mordor indeed!


Mechanics
LOTR has a few major differences from earlier editions of 40K which it somewhat resembles.  Each model can move independently and does not need to be "grouped" into squads.  But most important is the segmented turn sequence (you move, I move, you shoot, I shoot, both melee) and the ability to interrupt this sequence with heroic actions adds interest and tactics to the usual GW bland IGOUGO whilst being just as simple to play.


Heroes
In 40K or WFB most named heroes are walking tanks with impossible godlike stats, all but immune to harm.  LOTR heroes are more naunced.  Their stats tend to be very similar to  baseline troops, though they can usually make extra attacks and can take more hits "wounds." They instead get their heroic capabilities from their "Might" "Will" and "Fate" - resources unavailable to standard troops.


Might, Will & Fate
These are the stuff of heroes, and allow players to adjust dice rolls or interrupt the turn sequence (Might); cast or resist magic (Will) or miraculously avoid harm with a "save" (Fate).
Each hero has a finite amount (usually 1 to 3) of each to "spend". So a hero can attempt to take on impossible odds, but will eventually run out of might, will and fate...


The Heroic Action
There is another use for Might - you can spend it on a heroic action, which usually allows the hero (and any friendlies within 6") to interrupt the usual move sequence and move out of order.  These can be heroic moves, shooting, or combat (allowing a follow-up move and combat).  If used wisely, they can tip the outcome of a game.

The resource management of Might, Will and Fate brings a whole new tactical aspect to the game.


Mordhiem-Lite
There are rules for jumping, climbing, lying down, being thrown from a horse, etc - but all use a similar simple method - roll d6 - 1 = poor result, 2-5 expected result, 6 = great result.  There are also rules for fighting on stairs, when trapped, on ladders, battering open gates or doors, demolition charges and more. But all share the same d6 mechanic. Simples!


Here's what the Council should have done....


An example game
In last night's game I pitted a force of Uruk-Hai scouts (and Lurtz) against Gondor troops and Elendil.  The game flowed well, despite both of us having to refresh ourselves on the rules.

I has split my force into three; my opponent had his forces divided into two.  I withdrew one flank while combining  two of my groups to outnumber my foe in the middle.

I spent my Might points on heroic actions to dictate the flow of the game, quickly racking up kills and pushing back my opponent in both battle areas. My opponent saved his to cut loose in melee combat - his Elendil quickly killed Lurtz in a duel of heroes but the damage had been done; I had already forced his side to the 50% "Break Test" for morale.   When we called the game, Elendil was valiantly  fighting a last stand in the centre, surrounded by six Uruk Hai, while more orcs hovered on the wings.  A few Gondor bowmen were stubbornly giving good account of themselves on the right flank but were being pressed back by greater numbers.

Coming out of the game, a few observations:

Manage Your Resources
I spent my Might points on heroic actions to dictate the flow of the game, but was then without Might needed to duel the enemy hero and swiftly was hacked down.  It highlighted the importance of good resource management.

Push-back & Priority
The 1" push-back of losing models gives importance to Priority (and thus, heroic Might)  - units activating first can either flee or re-engage in combat.  This also means faster models have an advantage - LOTR has units with varied speeds (i.e. dwarves are slower then  humans) unlike the 40K nonsense of "everyone moves the same."


Tactics, not Coin Flip
Having a higher Fight (melee) skill (no matter what the margin) simply means you win ties. At first I thought it was a bit arbitary ("might as well flip a coin") but then I noticed how the subtle differentiation forced me to carefully match up fights to ensure outnumbering situations and thus an extra dice roll.  How you fight is just as important as who is fighting.


Priority Matters
Rolling for priority each turn made the games interesting; as having Priority and moving first allows your opponent to "react" to your move, but you get to fire first. On the other hand, having Priority allows you to arrange melee combats to your liking if you manage to get into contact.  You can, of course, interrupt the order of play by spending Might.

The 50% cover save offered by intervening obstacles (and the general weakness of bows - a '6' is usually the only way to wound an armoured target) made archery very ineffective on my rather cluttered board (I'm used to shooty games like Infinity and Tomorrow's War). 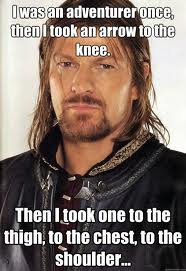 No wonder Boromir could fight with a dozen arrows sticking out of him - the shooting in LOTR: SBG is just as weak (you pretty much need a 4+ then a 6 to kill; i.e. about a 8% chance per shot)


No Hidden Knowledge
Unlike, say, Warmachine, games are not won by players knowing combinations of special rules.  You don't need to pore over an opponent's unit cards - after a few turns both of us knew the stats and abilities of all the units on the field. The fact a single "Damage Chart" is used for all melee and firing allows matchups of strength vs defence to be easily memorized - we were soon not even bothering with the rulebook.  Having a common set of simple rules with only a very few "special rules" allowed us to concentrate on maneuvering to create favourable tactical matchups; rather than "playing the rules."

Anyway, this has left me itching for more. I'll have to start watching the movies for "research purposes" to help my paintjobs, and I've started to scour eBay. (What the heck is it with dwarves - no one ever sells them secondhand, not even the plastic unit troops...)
Posted by evilleMonkeigh at 06:56