In my round up of WW2 air wargames I realised I missed "Scramble" - a .pdf from the Wargames Vault that has been warmly recommended by quite a few folk.  I recalled downloading it a year or so ago and dismissing it as rather unappealing, confusing and clunky but I decided to haul it out again for another look:

The Shiny
This is a rather rough, unadorned 54-page pdf.  No shiny here.  It is as dense as I remembered - quite hard on the eyes with info in small font packed into two columns, and no photos or pictures to break up the "wall of text".  Bring your reading glasses and an Asprin. There is a thorough table of contents which is much needed as I felt not everything was laid out in a "natural" sequence and info was hard to find when paging through the rules. 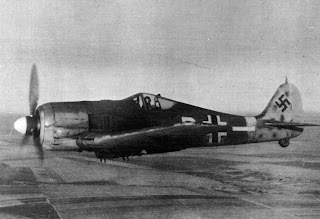 The Fw190 looks sexy. The "Scramble!" rulebook does not.

Crew skill (including Gunnery skill) comes in a range of levels and is tested against. There are actually two sorts of tests - a "Standard Pilot Skill Roll" or SPSR - used for unusual circumstances such as recovery from fire, and the co-pilot to take over; and a Variable Pilot Skill Roll (VPSR) used for more common maneuver tests like zoom climbs, half loops etc.  Gunners also have their own skill level.  Crews can gain experience, and be dazed, wounded or killed. A pilot can fall unconscious from wounds.


Like BtH, Scramble! uses blinds (or markers) to show  possible enemy formations. These move at a generic speed and have some generic rules of their own such as ignoring stall speed.  They are revealed when spotted by passing a crew check.


Movement
Initiative is decided by d10+highest pilot skill. With the usual proviso of "tailing" aircraft getting to move after their targets, sides alternate moving a single aircraft or a formation.

I actually quite like the movement rules which are surprisingly straightforward. Aircraft move between their stall speed and their maximum, and perform turns, climbs, dives, and an array of maneuvers like half-loops, loops, zoom climbs, skids, sideslips and power dives that need to pass a piloting test to achieve.

The movement rules are easy to remember and are nicely summed up in a small box.  There are some good ideas here I will be be borrowing when making my own homebrew air rules.  The main downside are the climbing rules which include writing down/carrying over information from turn to turn. And if you're doing that, you might as well be pre-plotting orders like in Check Your Six.

Combat
Fixed guns use a rather narrow 30d arc. Deflection is taken into account.  The firer shoots pairs of weapons, using the following method: Pilot skill + weapon modifiers + deflection/range + d10 vs the enemy's "Defence Value."  A player can choose the length of his bursts. Any d10 rolls "to hit" that also exceed a "Ammo Depletion Score" (usually 8 or 9) means the weapon runs out of ammo.

Each hit rolls a number of d6s depending on the gun calibre.  Scores of 1-5 do that amount of damage to the aircraft's "Damage" track. Any "6"s cause criticals and need to be rolled on a d10 chart, in which a range of Bad Things can occur to the target plane.

If an aircraft's altitude, damage, defence value is reduced to 0, if maximum airspeed is reduced below stall speed, or if the pilot is killed, the plane goes down. 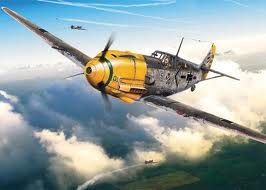 Continuing our Luftwaffe theme, a Bf109.
Photos break up "wall of text"; something the writers of Scramble! might well consider

Other Stuff
There are rules for special weapons like air-to-air rockets, ground attacks (level and dive bombing); strafing with bombs and rockets; anti-shipping attacks, and kamikaze missions. There are rules for ground defences like AA; night missions, radars, jamming and searchlights.  Extra rules include computer gunsights, transonic speeds, some German "Wunderweapons" . The base rules cover 27 pages which seems like less than it is, given the density of the text.

Aircraft Tables
These are almost impossible to use, given the way the columns are aligned, and the information is jumbled together. I had to use a ruler to work out what each stat was.  This is major headache and should have been fixed well before publishing. For God's sake, use some vertical columns at least to break up the stats!

There are aircraft availability lists for each theatre, which is quite handy if you want to stop your friends using their Tempests in the Battle of Britain; or to have an idea of what aircraft to use for a lesser-known campaign such as the RAF vs the Japanese Army Air Force in Burma.


TL:DR
Rather crunchy. Falls into the more complex end of the spectrum.  Definitely an alternative for those who dislike the written orders of Check Your Six or guessing game nature of Wings at War, and more "realistic" than Luft Krieg or Luft 1946.  There is lots of stuff here - it is a very "complete" toolbox for playing WW2 in the air - but a rather hard-to-use rulebook does not help its accessibility and the aircraft tables are very poorly laid out. I can see why I initially dismissed it as "not worth the effort."

Recommended?  Although Scramble! has its good points, lying at the "deep end" of the complexity pool means there is little to recommend it over pre-plotted games like the polished Check Your Six! It is also a tough sell compared to its non-preplot bretheren; such the less conventional Bag the Hun which plays faster and has an interesting card activation system which makes dogfights more chaotic and less predictable. I can see how it appeals to some, but Scramble! is definitely an acquired taste.