This is a good example of two things - why darker drab colours are seldom great for 15mm (I tried to brighten it but not enough, obviously); and my "solid drybrush" method I use on my 15mm vehicles.

Basically this consists of painting all the larger flat upper surfaces with a lighter tone and leaving the dark wash areas alone.  It looks crappy up close but nice from tabletop distance.

I did this because I feel the usual "edge highlighting" looks unrealistic on vehicles, compared to on infantry.  And the other day at the gaming shop carpark I was struck by how vehicles are always really bright on the roof/bonnet/boot. 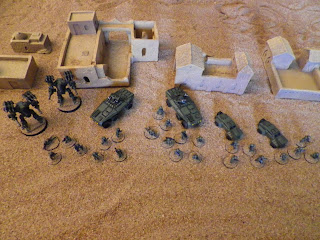 I named it Task Force Andromeda to remind myself to playtest the Fireteam Andromeda rules next time I take out my 15mm toys for some exercise... 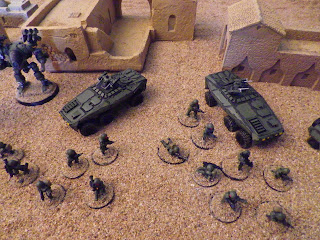 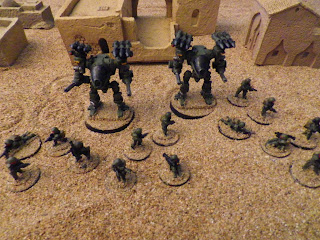 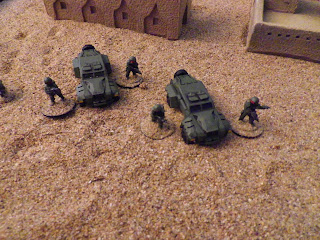 The recon squad travels by scout car - again from Antenociti. You can see where I have avoided the places where ink has pooled (like roof hatches) to exaggerate detail 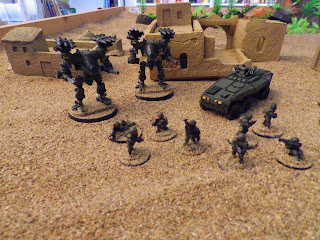 The infantry is by GZG. The whole platoon was hastily painted in ~2hrs between long stints of being forced to play in my toddler's sand table. (She's bossier than her mum!) 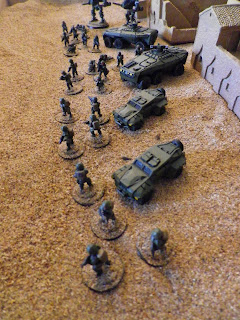 What I like about 15mm, besides the freedom to mix-and-match, is the price.  ~$60 for this fully-mechanised platoon.

If you want to see the opposing force (and how lighter paint schemes look better), see Task Force Weasel.
Posted by evilleMonkeigh at 20:29