Middleheim Playtest #2C: Getting to Grips

This is the last post on the expanded playtest. For Turns 1-3, see the two previous posts.

I'm going to condense Tern 4 & 5, highlighting only key points, as the writing-up is taking longer than the playing.

Yellow wins Momentum.  Again, the Yellow crossbowmen ganged up on the Red archer. Again, hits were scored to no effect. They lost Momentum and Red archers fired on their counterparts at the bottom of the board.  A few misses, but a Red archer scores a spectacular, gory kill! 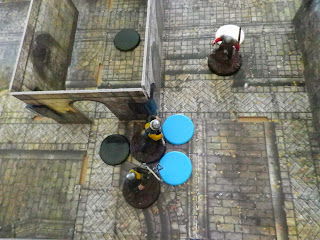 Concern: Reload & Fire  The ability for a crossbow to reload then fire in its active phase means its long reload isn't well shown.  It makes them a bit too similar to conventional bows which should reload much faster.

Red fails a leadership roll.  The Yellow MAA in the centre room charges, supported by pikes.  His target (Red MAA) is pinned against the wall and killed. Overconfident, he charges his pike into the MAA... (forgetting the +0 modifier when active/attacking, due to unwieldy pike)  ...the Red MAA easily forces back his clumsy opponent. (Pike rule working as intended; good for support/defense, weak in attack = good!)

The Red MAA, with the momentum, now activates and attacks the remaining, isolated Yellow MAA. A gruesome kill! He decapitates him in a shower of gore and the Yellow pikeman nearby waver - one flees in panic. 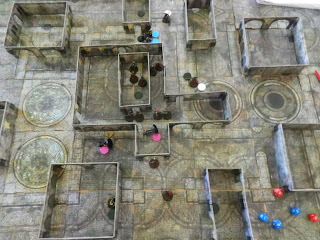 A yellow archer lies dead - as does a Yellow MAA, slain by his heroic Red opposite number

Interestingly, as leaders (men at arms) feel a few impromptu groups were formed - some succeeded, some failed to pass the Will roll.

Again a Yellow crossbow did the dubious reload-and-shoot; but this time the Red archer was prepared with a Reserved action and promptly shot him dead. 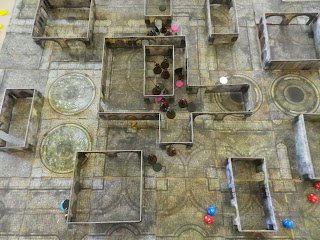 The final fatality of Turn 5 occured when the Yellow MAA in the centre got his 2nd kill of the game - pushing forward to slay a Red billman.

Concern: Push back - should losing a melee always result in a push back? Perhaps allow attacker to reposition himself up to one base length away. This would give the attacker choices.

Concern: Can you fire through friendlies/over their bases? If you are touching their base, yes. (I.e. leaning over their shoulder to loose off a shot. Otherwise, no. You can't shoot into a melee, either.

Concern: Knock Down - where does this fit in? It's cinematic but a bit unwieldy as a rule. How do other rules handle it?

Concern: Supporting. Do rear ranks cost a token to add their +1 dice in support? Do they count as being activated?  Maybe no cost in defence, but does cost a token when active?

Concern: Follow-up.  If a model pushes its opponent back a base length, it can elect to "follow up" and remain locked in combat

Concern: When you have momentum, can you take 1 action (i.e. reload crossbow) THEN go on overwatch?  Not sure.  This seems to go against the "trade two actions in your turn for one reaction to interrupt your opponents turn" exchange rate. 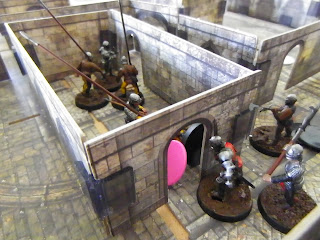 When I ended the game Red was pushing into the centre building. They also lead 3 loot tokens to 2.

I'd like to see what Stamina and Wounds add to the game, next playtest.

After that I'll phase in magic - which will have to be added in small increments (i.e. 2-3 spells at a time, building to 10-15). My ambitious plans for several "schools" of magic (~30 spells) is far in the future, though now I am compiling spell lists.

I need to examine how knocked down/push back works. Maybe look at SoBH and LOTR who both implement them successfully.

I'm a bit concerned about how multiple d10s skew the math, but in actual practice the weapons seem quite balanced.  The mechanics themselves are easy to change, based as they are on d10, and I'm happy to completely swap out my d10+stat system for a d10 vs TN if it proves an issue.