Diary of an Average Painter #2

Surprisingly, yesterday afternoon my children were content to wander around in my shed rather than insisting on sitting on my lap and "helping" me.  So I picked a few easy-to-paint models and went for it. 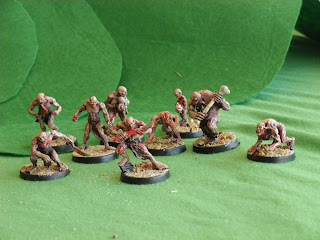 These ghouls were very simple; a dark red undercoat, a flesh drybrush, and bone for highlights.  I thought yellow eyes would be cool but it was a poor contrast colour; green would have been better.
I used a very bright red for the blood; it looks a bit silly up close but is effective at tabletop distance (see my previous post re: 15mm-paint-style-for-28mm)

First, some ghouls. They will inhabit my Terraclips sewer system for a playtest of my homebrew Modern Pulp rules (which is a bit of a mashup, containing elements of SoBH, Infinity and Savage Worlds).  A paranormal SWAT team will investigate, lead by their squad psychic. 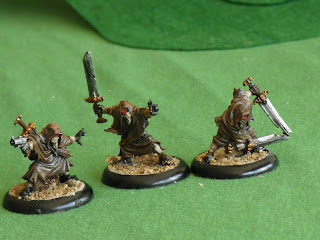 Next some Witchling Stalkers.  I deliberately chose red eyes and white wrappings/bandannas to contrast with their drab leather cloaks (oh so easy to paint - you can see I am aiming for the low-hanging fruit...)

These are also to be part of a Modern Pulp playtest (a Weird West setting I chose primarily so I could use my favourite historical, Malifaux, Empire of the Dead and Confrontation minis alongside each other!).

Buoyed by my progress, this morning I beat the kids up(!) and knocked up some cyborg spider-thingies from Malifaux. 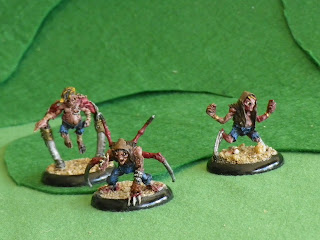 I liked these a lot less, for some reason - not only does the paint job look worse, they were fiddlier, too.  Oh well, more antagonists for my Weird West setting are table-worthy at least.

My kids were soon awake and came to "help", but I managed one last thing - I turned a Mage Knight golem into a Mercenary heavy warjack. I'll add a warjack gun from one of my Cygnar spares later, but I'm content my $1 clix matches up pretty well with a $10 official warjack. 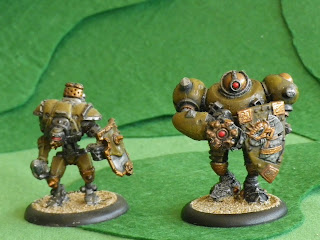 The Mage Knight clix (right) came with dual shields so I sawed one off with a Dremel. A bit of a rough job but OK from tabletop range (that's my mantra).

As usual, I'm not "showing off" mad painting skills, but showing what you can do with minimal skill, time and effort.  Only one coat was used, and a maximum of one wash.  Most times only 4-5 colours were used.   Anyway, I hope this inspires some fellow average painters out there to grab their brushes out and have at it...
Posted by evilleMonkeigh at 17:40