As I mull this over, I dug around in my 6mm sci fi, and to be honest there's nothing that makes me like that scale. Perhaps because my 6mm is mostly Brigade, not exactly known for their compelling sculpts (their idea of a sci fi tank is a cardboard box with a turret on top).

Anyway, while rabbiting around I found a bunch of Iron Winds battle armour.  They are about the size of  a 15mm infantrymen and would make good "big" mechs in 6mm scale. Jury is still out - I mean, would you play a skirmish game with individually based 15mm? I decided to paint them up and see.  Voila! 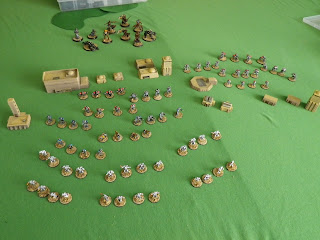 Yesterday's painting efforts... I realise why I have almost no backlog in 16mm/6mm scales - it's so freaking easy and quick. 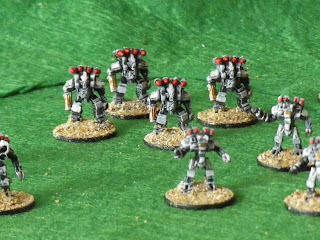 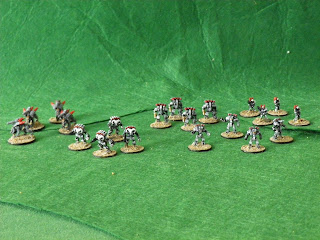 Word of Blake demon series battle armours. I kept the paint scheme consistent in case I want to make it an "army" later. 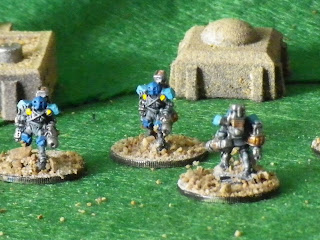 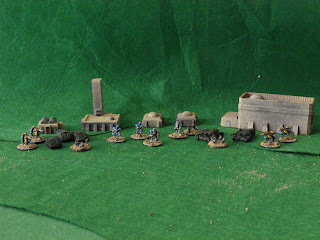 Some 6mm tanks, infantry and buildings for scale. 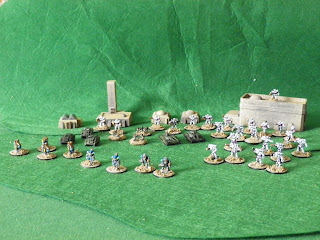 The buildings are Brigade and were both cheap and (I think) effective for sci fi. 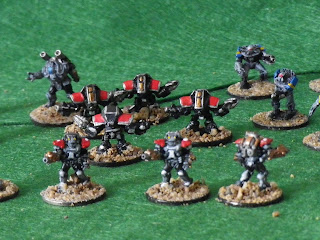 "The smaller it is, the brighter you paint it"

Anyway, as I'm painting, I'm now thinking about mech rules. I was unimpressed by Alpha Strike - in attempting to simplify the gluggy Battletech rules, they removed things like heat sinks and limb damage - things that make Battletech "Battletech" - whilst keeping a lot of unnecessary mechanics from the old game.  What makes a mech game a "mech" game?  I've already discussed this a bit in the google group, but I'll lay out some key points here:

When is a mech, a mech?
I'll divide them into three sizes
1. The fckhuge = Several stories high, range into hundreds of tons (Gundam, Battletech, Titans)
2. Could transform into a jet = about the size/weight of a modern AFV (Macross, Heavy Gear). Think an Apache gunship on legs.
3. Battle/Power Armour/Exo-suit = a humanoid-size suit that is "worn" (Appleseed, 40K Terminator, BT Elemental)

For the sake of this article I'm confining myself to the first two types. 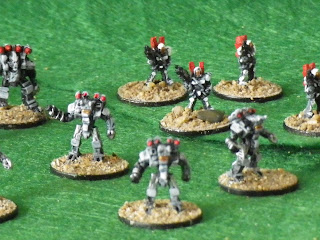 There Has to be a Sense of scale
Combined arms - tiny infantry scurrying around, normally impressive MBTs to be "stood over."
Tiny houses at waist (or ankle!) height.  The modern PC game MW:O makes the mistake of making buildings so tall the mech does not seem big in comparison. When mechs only fight mechs, it's hard to realise how big they are.


I think it's important to differentiate mechs from human infantry. Many indie mech games are just reskinned 40K.  What makes it a game "mech?"

Heat Management/Energy Management/Travel Modes
This not universal, and is very "Battletech" - but why not a nod to the elephant in the room?  If it can be done simply it does provide a nice differentiation point making mechs more "vehicle" and less "infantry."  I might also include Heavy Gear movement modes (also seen in VOTOMS) where wheels can be used as well to "skate" The mech might even transform - if you have suitable models for both forms.

Detachable Limbs
It's always cool when a limb gets blown off.  Or you rip off another mech's arm and beat him around the head with it.   Again, this makes the game more "mech-like" (though there are some cave trolls in fantasy who would debate this...)

Upgrades, Heroes & Levelling
Nearly all mech genres have featured highly customizable mechs - from the special "hero" mechs of Gundam and Macross to the "build points" of Battletech.  Most mech franchises also feature "ace" pilots capable of mowing down hordes of regular grunts, so I think the game should allow pilots to progress from "raw-teenager-who-is-the-Chosen-one" to combat veteran. In other words, a campaign system and a unit builder. 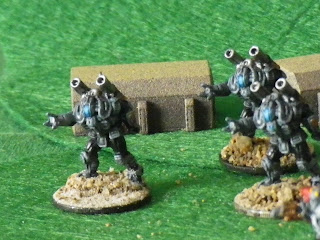 Due to the scale of the vehicles, infantry and buildings, the power armour have become "big" mechs.

How simple?
Although Battletech has a fervent fan-base and has certainly stood the test of time, I feel the record keeping and gluggy rules are not for everyone.  On the other end of the scale, most simple indie mech games are simply reskinned 40K or are pretty much indistinguishable from most WW2-on infantry games.  I guess it depends on the scale - how many mechs are you trying to get on the table?  However at what point does it cease to become a mech game and simply become an infantry game?