I've been quiet of late, due to report card season/end of term pressures. My rare hobby time has been spent doing up some 'nefs so I can do some serious playtesting of my homebrew Aeronef rules.

Longtime readers are probably aware Aeronef is one of my slow-burning homebrew projects, along with supercavitating submarine jets, vector-based space combat as well as pulp and skirmish rules in the Necromunda/Mordhiem vein. 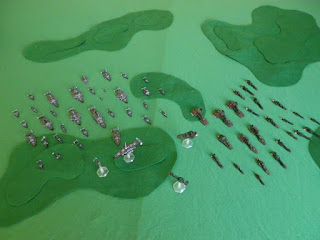 I "speedpainted" these aeronefs over a few afternoons, if the term "speed" can be applied to painting with both a one and three year old sitting on your lap "helping."

Last Christmas I had an ambitious project list, which I spoilt by attempting to assemble some Macross minis first up - after about six hours of frustration I rage-quit and eschewed everything wargaming-related for the next six weeks.  This time, I'm aiming for the low-hanging fruit - easy painting projects and "tidying up" old rules rather than launching anything ambitious.  If you don't aim high, you can't fail so much, amirite? 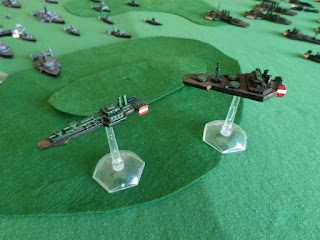 Destroyers of the Austro-Hungarian Navy.  Apparently green was the actual colour of their early-WW1 fleet. 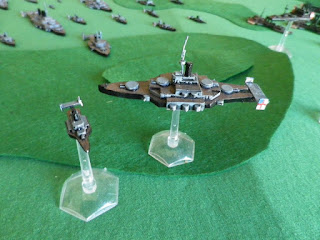 The White Ensigns could have been painted on neater but I had some "help" which made them a bit wonky...
Aeronef Rebooted
I tend to mock rivet-counting naval games, but my previous 'nef efforts have intended to devolve in the direction of General Quarters III.  So I am determined to keep it light, and only loosely historical.  I mean, why am I being too concerned about realism in a game involving flying battleships powered by handwavium?   I want it to be in the more lighthearted vein of Man O War than a serious sim, so I chose Warmachine to base the mechanics on, as it is the most over-the-top game people are familiar with, as well as using 2D6 resolution (something I want to experiment with) and offering consistent mechanics. 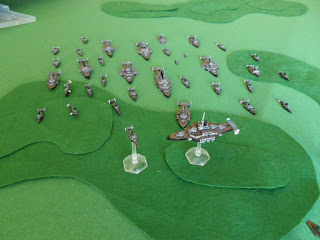 I'm experimenting with the"contour map" style of felt hills to make it easy to place ships on them.  At the moment, I'm struggling with how to present clouds - as cotton wool on bases, as a table-wide effect, or a white felt patch placed flat, on top of the hills.
The 10c tour:
Initiative: Players move ships/squadrons alternately but can "follow on" like in Epic by passing a Command roll, and may either move their own squadron or force an enemy to move theirs.  Initiative can be seized by a contested roll if enemy ships are at close quarters.
Actions: Ships must roll above a Command score and their measure of success determines the amount of orders they may give; i.e. changing speed or altitude, repairing, firing, reloading torpedoes etc.  Better crews can do more stuff in a turn. I don't think reactions are suited to a naval game, but there are some limited reactions available to enemies at close quarters (~2000 yards).
Movement: Ships move the usual 4-10" per turn, but their gun ranges are short compared to many games (i.e. 10-12" or so) making maneuver important.  Altitude matters - plunging fire is more deadly and there are "dead zones" where a ship's guns cannot elevate or depress. There are 6 altitude levels, denoted by a micro d6; mountains extend into the bottom 3 bands and different cloud types provides terrain in various forms.
Firing:  Similar to Warmachine. Ships fire their "battery" with a single 2d6 roll. The chance to hit  "Firepower" is a mix of rate of fire x number of guns.  Firepower + 2D6 must beat a ship's "Defence" which is a mix of its innate size, speed and agility.   If a hit is scored, the firer's "Damage" (shell calibre) + 2D6 is compared to the target's Armour.   Torpedoes act like a powerful AoE weapon; a spray template is placed on the table and aeronefs passing through it are attacked in their movement phase.
Damage: If the damage roll exceeds the armour, there are 4 levels of damage (aka hitpoints) - light, heavy, crippling, and "kaboom". The levels of damage inflict various penalties to movement, command rolls and shooting.  BFG-esque "blast markers" make an appearance as well as smokescreens and clouds for cover. 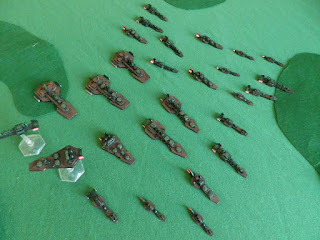 The smaller Austro-Hungarian fleet has a unique style of nef which I found preferable to the barge-like "German" range as the antagonists of the British Empire.

Rationale: The aim is to make a game that is not simply a rebadged WW1 naval game but one where altitude matters creating new, unique tactics. Mountains, clouds and various blast markers and AoE templates should provide plenty of "terrain."  There is little rivet counting - damage is the same 4 levels for all ships, and more effort is spent on command and initiative rather than resolving shooting.   Crew quality is very important - better crew can do more things in a turn, and react better under pressure, rather than being +1 to shooting.  All ship classes should have a valuable, unique role. There is a deliberate focus on making escort/destroyer class 'nefs a valid ship class - vital to all fleets for scouting, escort, interdiction and boosting command/initiative. Eminently survivable, whilst perhaps not a 1:1 match for a battleship, they can dictate an engagement with their speed and agility - compared to the flimsy uselessness they exhibit in many games. A 1v1 with escorts should be just as fun as a 1v1 with battleships and no less tactically interesting.While it's not particularly fantasy-steampunk focussed, handwavium is embraced as I don't think "realism" should be the ultimate goal of a game involving flying battleships.

Stay tuned for some playtest reports which should be inbound in the coming week.

By the way, for those interested in aeronefs but not the glacial pace at which I work on rules, the talented Eric Farrington (among his many other projects) has done a very polished and professional-looking set "Castles in the Sky" - it has a Battlefleet Gothic vibe which will appeal to many.  There's a discussion in the google group where feedback and playtesting is welcomed.