The Train of Thought #1: Morale, Reactions, and Wrath of Kings

A few random topics that have been percolating in my head. I tend to have a bad habit of not posting until I have a complete article where I explore the topic from a few angles: which means many many posts don't get finished and sit eternally in drafts. I'm going to experiment with releasing "trains of thought" or doing a post covering several topics that are currently running through my head that I haven't fully investigated myself.

Reaction Mechanics: What makes a good activation system - or "reactions in fantasy?"
The more I think about it, the more I am convinced reaction mechanics only belong in modern combat wargames involving large capacity weapons.  I've explored reactions before - here and in a more negative manner here - and have tried to shoehorn reactions into my homebrew Middlehiem rules (which shared SoBH and Infinity mechanics with my homebrew Pulp rules). The problem is balancing missile weapons; a bow that fires once every 3-4 seconds is quite a different beast to an assault rifle that can engage over a dozen targets with 30 rounds or more; basically at any given time it's highly likely that there is a shot up the spout to "react" with. Unlimited (or at least, strong) reactive fire in particular makes sense in the context of a suppress-cover style modern gunplay; quick play Infinity demonstrates this well; players leapfrog models from cover to cover, positioning models to cover; it feels right.  Obviously in a medieval/fantasy setting, crossbows and bows need to be very limited; otherwise they will become inordinately strong, pumping out "extra" shots due to reactions- I discussed how they could be limited for fantasy here and discussed "free" (easy, or involuntary reactions such as ducking back or warding off a blow) vs more costly deliberate reactions (careful aim at distant mini, or counter charging a foe) here.

There's plenty of reading to explore in the links; but basically, reactions slow down and complicate a game (an allegedly simple game like Tomorrow's War can really slow due to reactions) and tend to emphasize firepower and restrict maneuver.  The "new defacto activation" - which I call "Chess activation" or "alternate activation" players take turns moving units or models (as opposed to moving their entire force a la IGOUGO) allows a modicum of "interruption" but has a few flaws; individual units can still do a significant amount unopposed (usually the active player gets at least 2 actions, sometimes three); also having the players have such a predictable and gameable Chess sequence (I move one, you move one, I move one... und so weiter).   One solution is to restrict models to a single action (move or shoot or melee) not "typical" double or triple actions like charge (move+move+melee) or the usual move+shoot.  By breaking the game into smaller increments, it makes the game more "fluid."  This is good. The recently reviewed Broken Legions does this; models either move or shoot; with melee occurring simultaneously after all have "activated."  Activation can be randomised a bit; perhaps with card activations (like TFL)  or my favourite, a Epic/Warmaster style dice roll to "follow on" and retain the initiative; or leaders may allow more than one model to activate simultaneously.  Reactions can be limited by merely old fashioned "overwatch" or a "hold" action; models reserve their turn to interrupt an opponent later (perhaps needing to pass a roll of some sort to see if it interrupts in a timely manner).

TL:DR - limit the actions in a "turn" to a single action; keep activation from being a perfectly predictable ABABA by some sort of dice/card/leader based mechanic, and keep good old fashioned overwatch and you can mimic the effects of most reaction systems with far less complication; though a strong reaction system may be best for modern combat with high rate of fire/potent shooting. 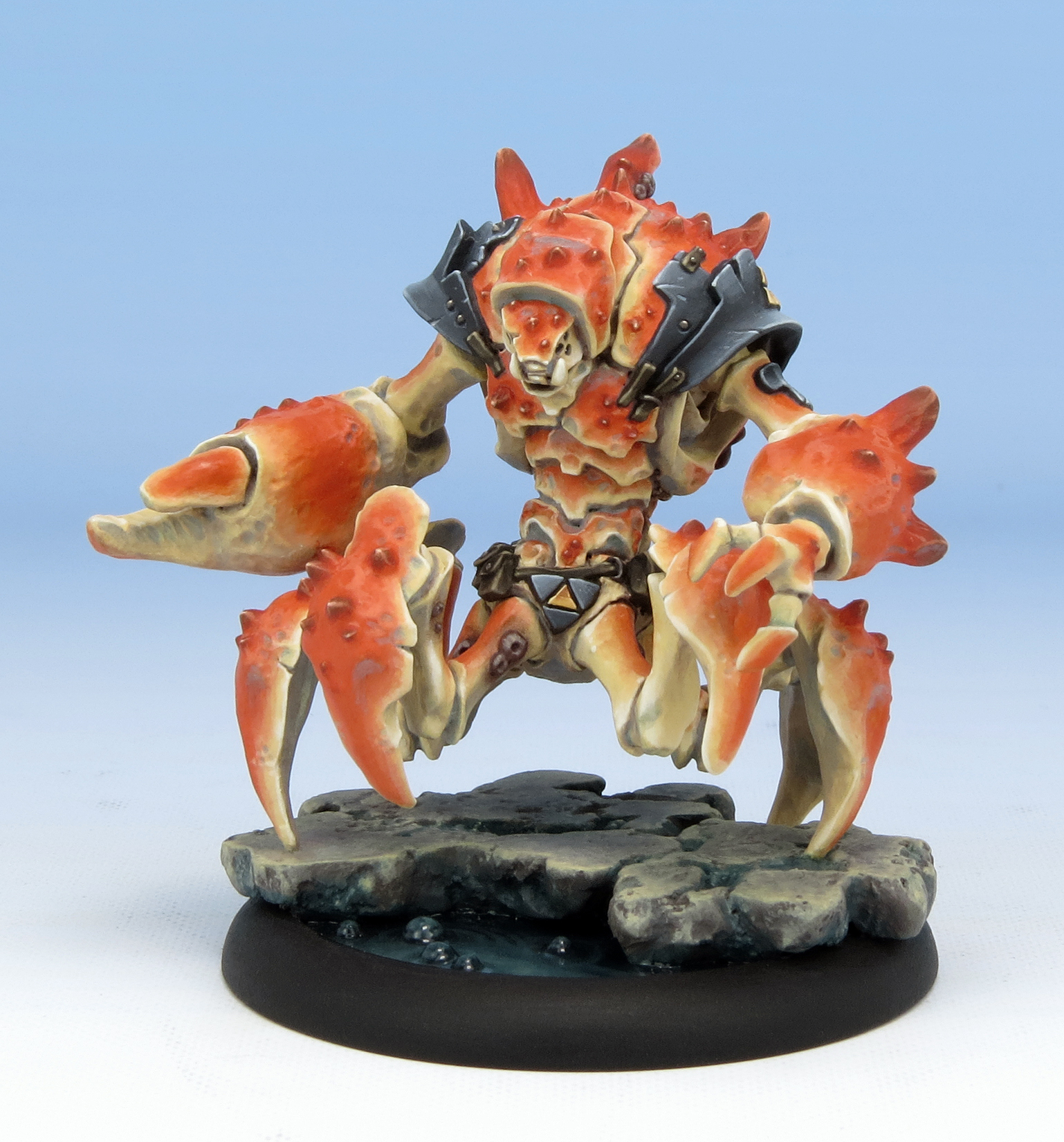 I got interested in Wrath of Kings thanks to hunting down the makers of these awesome crab warriors; the rules seem decent with some interesting twists whilst not going too outside the box.

Morale and Wrath of Kings
While trying to find out who made some awesome hermit crab warriors, I stumbled across this skirmish game. (< free rules).  Two things stood out (well, three - their werewolves are a complete ripoff of Confrontation 3 Wulfen; Warmachine warpwolves tip their hat to the old C3 stuff but these are pretty much exactly the same)  - the combat resolution and the morale focus. Actually there is four - the model count is aimed ~20-24 which is kinda weird ground I feel only LoTR did well; most skirmish games are aimed at smaller model counts a la Mordhiem ~10-12 or at the platoon+ level (30+ with extra specialists etc).

Morale & Victory Conditions
Given morale is a recent topic it's interesting that the core aim of the game is to win by destroying enemy morale; morale = models/3 + leader rank.  So a 15 strong warband with 2 ranks of leaders is 15/3 + 2 = 7.  Obviously killing troops (and especially leaders) is a good way to reduce enemy morale, but wait, there's more.  The other way to win via morale is to impact their motivation.  What's that? Glad you asked.  At the start of the game, players choose warband size, build their army, and choose a motivation. The faction's "motivation" is basically a set of missions to choose from. Each faction can choose from two motivations.  For example the Duty motivation might include missions like "escort civilians" or "stand your ground" but the Vengenace motivation might have missons like assassinate a leader or burn down a terrain piece as the mission.  This is a really clever idea and gives factions flavour. Completing your missions can boost your morale score and remove a chunk of your opponents' morale.  I'm not sure if you can complete two missions at once i.e. assassinate an enemy leader AND burn down a terrain piece - but if so, that'd be even more cool.  There's been effort put into deployment zones and game size. For once, a game that does not add scenarios and missions as an afterthought!

Combat Resolution
Also a bit different; models roll a # of d10 to attack (usually one d10 for a grunt, and several for a hero) and the dice is compared to a "Defence Chart" on defender's Warmachine-esque unit card.

The d10 result is compared to the chart, and might come up as "overpower" - two hits/wounds, "strike"  one hit/wound, "magic" - deflected by magic, "parry" defender parries attack, and "block." So with a single roll of a few dice, the to hit+wound+saves etc are all rolled into one.  Each unit has a unique special rule or two (it could be simple such as a "Sundering" attack that trats all "block" results as a "strike.") or a more unique AoE or magical attack.

Anyway the rules are a free dl so check them out; they seem pretty sensible and solid - though I'll probably persist with my homebrew Middleheim rules.  The starter kits seem affordable ($75USD/$90AUD for a complete ~24 man warband; pretty good as far as skirmish games go) so I'll probably pick some up... ...after I finish my current 28mm fantasy (Sessairs, Wulfen, Orcs from C3, Legion from Warmachine) under my rule of "no new minis til the old ones from the same genre are painted."
Posted by evilleMonkeigh at 07:30