War Thunder is a WW2-focussed PC game where players can pilot tanks or aircraft (sometimes on the same map) and when I heard they would have a naval aspect focussing on coastal forces - E-boats, MTBs, MGBs and destroyers (possibly my favourite genre of historical warfare, period!) I downloaded it, afire with dreams of piloting a "Dog Boat" against E-boats in the Med.

Well, the naval side of things has not come out of beta yet, but I've had a lot of fun flying air battles.  As a kid I had "Encyclopedia of World War II Aircraft" on near-permanent loan and without exaggeration I could probably name (and give key stats) on pretty much every combat aircraft  of the era (though trainers and transports were a bit more dull to my 12-year-old self).

This review will focus only on air battles - I haven't explored ground forces (tanks) beyond the tutorials. Aircobras and Kingcobras are some of my favourite planes; good at the low altitude of Arcade mode; solid all-round and packing a 37mm with decent .50 cal backup. Also they look sexy!

War Thunder allows me to live out my dream of flying Kittyhawks with shark nose art against Zeroes; Spitfires against 109Es, taking down B-17s with a cannon-festooned 190, flying a Molins armed Mossie against German shipping...

It has a range of difficulty settings: arcade (very much Crimson Skies with simple damage and physics; you usually fly with a mouse) realistic (more realistic physics and damage, logistics) and sim (cockpit only, joystick only, "full real" settings).  I must admit I only play arcade; with small kids I don't have the luxury to spend 30 minutes climbing to altitude like in sim mode and with limited time I like air-spawning straight into the action.

There is a huge range of game modes; you can play 12v12 arena, fighting to capture airfields, bomb targets, fly historical missions or campaigns or even make your own.  You can fly historical lineups or just mix up teams with random planes in multinational lineups; my mate might fly a Hurricane while I back him up in a 109.  There's something for everyone; for the die hard historical buff to the casual dad who wants to jump in and pew-pew in a Spitfire for 5 minutes using merely a keyboard+mouse and the most basic flight controls.

I have focussed primarily on Arcade quick matches; they go for 5-10 minutes, perfect for a busy dad; and you can get away with a minimum of controls (i.e. non-gamers can easily jump in fly about and pew-pew using only a keyboard and mouse).  If you die you can respawn and return to the fight if you desire. Arcade mode is divided into tiers 1 to 5; basically by historical era and performance; tier 1 may include Gladiators, I-16s, 109Bs, A5Ms, CR.42s etc - mostly nimble biplanes with low firepower - I did not enjoy this tier as much due to the frustration of peppering a biplane with dozens of non-vital MG hits.  Also, it's very dogfight-y with aircraft tailchasing in circles a lot.  I really enjoyed tier 2 play, early war craft like 109Es, Spits, P40s, Wildcats, Yaks, Zeroes and Hurricanes. I prefer energy fighting in the vertical and I did well at this tier against opponents who still only wanted to "turn and burn" low.  I'm at tier 3 now (Corsairs, Hellcats, later 109s, Spits and Zeroes, Mustangs, La5/7s, P47s, P38s etc).  Tier 4 is late war super-props like La11s, Bearcats, Do335s and Ta152s and Tier 5 is jets up to the Korean War (including my favourite quirky jet, the DH Vampire). 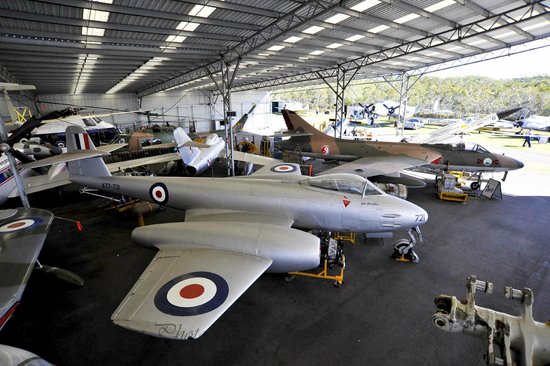 The Korean War jets reminded me to visit Caloundra's  Air Museum for a day trip. They have a great selection of 1950s jets, including some quirky planes like Fairey Gannets.

Gameplay wise; it's hard to review as War Thunder varies wildly between game modes - in Arcade mode I've noticed that as ground targets are often the objective, bombers tend to determine the win unless the fighters actively hunt them and don't get tempted into the nearest furball.   I've had a lot of fun brushing up on air combat maneuvers; whilst I already "got" simpler stuff like Immelmans, Split-S, scissors and yo-yos, I'm learning to spiral climb and perform hammerhead turns.  I found this WarThunder-specific  Youtube channel handy (he's also an Aussie).  Playing with friends is fun; having a wingman to clear your tail is pretty handy and I like dragging enemies out with climbing turns to bleed them of energy, leaving them hanging as easy targets for allies to kill.  If dogfighting isn't your thing, bombers have a big influence on the battle.

The planes seemed reasonably balanced (unlike games like World of Tanks where a tank can find itself unable to damage a "better" tank) and it can be fun to frustrate faster "superior" planes in a slow but agile lower-tier plane like an I-15 biplane which can pretty much spin on its own axis.  A good pilot or an altitude advantage is more important than the plane model.  If you have a rough grasp of energy tactics and fight in the vertical where possible, you'll be above-average at lower tiers where things tend to often dissolve into low level turning fights. 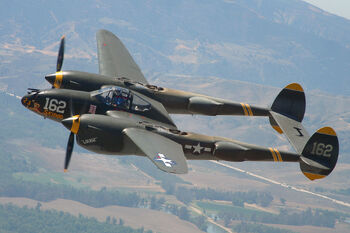 The P-38 is my other favourite ride; surprisingly agile, a good climber, with firepower concentrated in the nose. Also, it has quirky good looks.

It's not perfect: there's a lot of target fixation and a fair bit of accidental ramming; "allies" often "shoot through" you to try to secure a kill; I hate getting sniped out the cockpit by .303s at 500m (always seems to happen to me, but the MGs seem dammed ineffective when I use them). Also, arcade mode is rather  "Air Quake" at times but that's not really a negative (after all, there's realistic and sim modes for those who want to spend 30 minutes stalking a single plane or performing complex engine start routines).

Also, all planes are not automatically available; you have to "earn" your way to higher tiers by gathering XP - through winning, kills and mission objectives.  If all you want to play is 1950s jets (tier 5) I recommend you get IL:1946 where 400+ planes are available instantly; getting to jets in War Thunder is the "end game" achieved after months of gameplay.   If you just want to try all the planes, it's not an issue: I'm lingering at lower tiers learning to fly properly and unlocking all the interesting looking planes (rather than racing to the "endgame" tier; too often players assume because they've got a good plane it means they are good players).

I found I had to switch around some controls (elevator for throttle) and make the "look around" key and combat flaps buttons easier to access; but I didn't have to spend an hour setting up my controls like some games.  In Arcade, a mouse > joystick due to more precise aim (heresay, I know!) but after all there are joystick-only modes so it's a bit of a non-issue. Flying can be as simple (i.e. WASD + mouse) or complex as you want it.

I like 109s (my favourite to fly in IL-2:1946) but have struggled with the elevator/high speed control issues in War Thunder, compared to the better high speed controls of many American planes.

In summary: War Thunder (air battles) is a free-to-play game which does not force you to spend, which has a game mode for everyone; be it historical campaigns, homebrew missions with friends, or arcade mode "air quake" with multinational fantasy lineups.  It can be as simple or complex as you wish; from mouse aim to joystick full-real settings; from instant dogfight air-starts to complex engine management and takeoffs - from 5 minute "quick matches" to long campaigns.  Whilst it is not as "hardcore" as the DCS series, it caters for a wider range of modes and styles; for the first time I feel like I might finally uninstall IL-1946 (the greatest combat flight sim, ever!) as War Thunder gives me similar options, but is more user friendly and exponentially easier to play multiplayer or with friends.  Probably the major downside is that all planes are not automatically unlocked but you have to "earn" them (though you can test-fly them solo.)  Oh there's also tanks and (upcoming) naval forces included in the game you download.

Recommended:  Yep. If you like WW2 props or Korean jets, there's something here for you, whatever your interests or level of ability.  It's free - so there's no reason not to try it; you don't even need a joystick.
Posted by evilleMonkeigh at 02:49