Back in the Shed

Well, school holidays allowed me some time back in the man-cave. The COVID-enabled frantic painting output has died off (I've mostly been experimenting with homebrew rules and PC gaming with my son). My kids are sharing tenancy of the shed now; daughter mostly reading Harry Potter and son playing both RISK and an invented-by-7-year-old-wargame with plastic ant tribes - combat is mostly a dice each, loser dies, but he adds in extra rules "these are fire ants so if they get less than 4 it counts as 4, unless they are fire ant enemies who are immune to fire." He seems to have the grasp of wargames already!

19 more LoTR take my total to 335 for the year. This is a mix of Mordor uruk-hai and engineers, Castellans of Dol Guldor and foot Rohirrim. (I really dislike mounted minis so 6 more Rohirrim on horseback await me reproachfully on my bench.)  Next up, some more colourful Easterlings - my favourite minis - it's got 'dad-bod' Abrakhan Guards and pirates. 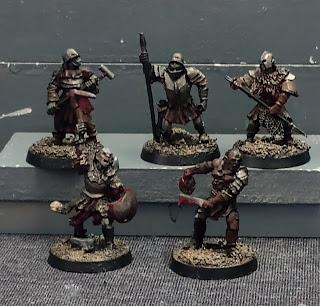 This was a random mix of minis - a feral uruk (broken sword replaced by decapitated head), an orc leader(?) and some what I presume are siege troops, sans catapult (I think I had some ladders in a box). I bought my LoTR minis cheap in 'job lots' in the lull between movies, working on a 50c-per-plastic, $2-5AUD per metal or mounted ratio, so I have lots of double-up heroes and random metals. 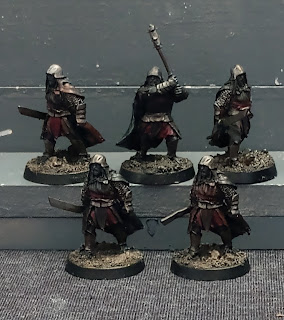 Dried up paints and dull colours made these a bit of a slog - I'm out of practice. These were Mordor Uruks which I discovered after a bit of googling. Haven't tidied up the bases and probably should re-do the highlighting. 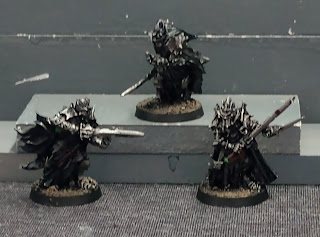 I bought these Castellans this year - I've actually had very few wargame purchases in the last 5 years. It's just not very good value as a hobby - I just shifted a rulebook cupboard with 150 rulebooks to my shed. At say ~$30 each that's $4500 of books, of which I only regularly use 10 or so... eeek. At least the LoTr minis have appreciated in value!

I've also got some Rohirrim mounted, many heroes and some of their elite guard. I'm not sure how I'm going to go about painting their armour - rewatching LoTR with my daughter, there is a lot of reddish-leather chestpieces and chunks where you'd assume metal on the minis. 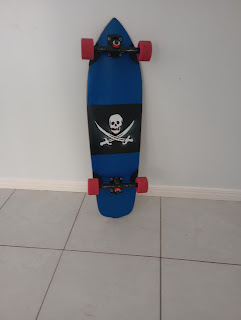 I'm going to count this as mini #336 as I did paint it (inspired by watching Pirates of the Caribbean with my daughter). For those concerned I'm going to maim myself, I always helmet, pad up or wear slide gloves+jeans. Only crash was 2 years ago when my 5-year-old veered into me and I hit a seed pod while evading, but thanks to my gear I yielded only a small blood sacrifice to Skatan. As a hobby, longboarding has a lot of similarities with wargaming - collecting and customising boards (aka minis), often more looked at than used!

In other news, I've been experimenting with homebrew mecha rules thanks to reviving my interest in Mechwarrior: Online (actually pretty good as a 'dad' game where reflexes are not a premium). I enjoy min-maxing mech loadouts and I reckon for every hour I spend pew-pewing I spend two in the mechlab. It's still playing the game, technically!  It's a PvP shooter, but slow paced and full of lore nerds, so I can recommend. I've also dug out my cowboy minis thanks to the PC aRPG "Weird West" which has Deadlands vibes; my digital gaming has influenced my analogue gaming for sure!  I've also done another pass at my modern jet rules - I've never played a fighter wargame that wasn't either slow or bogged in the 70s. I'm allowed another article with my experimenting - the last was in 2019...